You are here: Home / Panther makes an appearance / The Panther butts in… 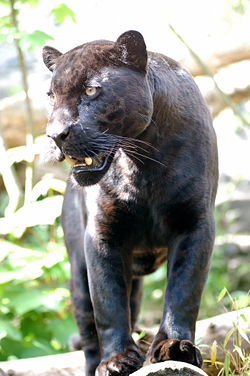 The Panther complained it had been a while since I blogged and seeing as how I wasn’t saying anything, could he?

SO the wild Orchid I married is doing a blog. That’s fine apart from one thing – I have to read it regularly otherwise I am not being supportive.

If I ask of an evening for her views on something, I am shot with a vicious leer of judgement as she points out that her views are in or on her blog.

Are views somehow more important or valid simply because they are written down on the biggest of public forums?

I married her and that though and therefore I am legally bound apparently to listen to her all night, even if the football is on, and sometimes during the day while I am work too.

But now, in some kind of twisted control freakery, I also have to read all about what’s baking her noodle.

To make matters worse, lots of others are now logging on, affording the Orchid a level of celebrity. Great.

She is a beautiful and wise woman. She married me so I owe her and will keep reading, she said so. It’s my job, she said so. Don’t worry, you’ll almost certainly read about it soon.

Anyway this is what I was going to ask the people who read this: What annoys you?

Don’t tell me. I only ask because someone asked me the other day if I knew what annoyed him.

He actually said: “Do you know what really annoys me?” Then he looked quizzically at me for a few seconds as though I might know. I know that I am supposed to say “no” or “what” but we never got to that because I pointed out that it’s that very question that really annoys me.

No I don’t know what annoys you, how could I? You’re not wearing a T-shirt with the slogan ‘corn beef really annoys me’ on it. There is no clue in your features.

Why not just say what really annoys you? Why waste time? We only have a short time on this earth, get to the point fella.

The Orchid back home tells me it’s just a language tool, word furniture or something, What the f**k is word furniture? It’s the sort of phrase a modern art fan might come up with. I don’t want to sneer but I am. Word furniture indeed.

Next time someone says to me ‘you know what really annoys me’, I am going to punch them in the face and say ‘is it that?’.

Or I will just keep asking them, is it dolphins, is it Wakefield, is it cheap carpets, lite instead of light, is it when people say aks instead of ask, cardinals, Weetabix, the new Scottish Widows woman, Dave Lee Travis, chairs, products like “No one could believe it’s anything but margarine”. Then when their face stops squinting, I will say “no sorry I don’t know, you better tell me”.

I pity the person who approaches me and says ‘you’ll never guess what happened to me today’.

And you know when someone says “don’t look back just now”, I don’t and I don’t feel an overriding compulsion to do so. Weird eh?