You are here: Home / review / Yoga game turns out to be a downward dog 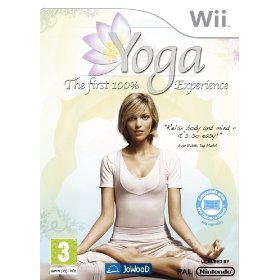 I like yoga, it makes me feel pleasant and relaxed neither of which happen all that often these days. However Boy One and his rather inconsiderate need to be supervised, combined with football matches and occasional visits to the newspaper I sometimes grace with my presence mean that I hardly ever get to a class.
So I was really chuffed when I found Yoga (Wii) the first yoga only game for the Wii balance board. I imagined it would be along the lines of the rather lovely Wii Fit – not exactly full-on but vigourous enough to count as exercise on can’t-be-arsed days.
The Panther of News was dispatched to get it as a Christmas present.
Yesterday I found the time to have a go.
It has three modes. Story mode is a rather ponderous wander round a temple place while your guide tells you all about yoga history and what’s nutritous to eat. There are rooms where you learn to do a single pose. Training mode is a series of poses with instructions but no suggested sequence. The other mode – see I’ve already forgotten its name – takes you through about eight fixed sequences for certain things such as backache or arthritis. Here’s where I thought I’d found what I was looking for and clicked to give it a go. Great until we got to the downward dog – looking the other way, I couldn’t see the screen and the wee wumman teacher didn’t say anything more helpful than “your posture is fantastic”. How the hell did she know? So, actually, she hasn’t told me to change position yet so I’m still there, bum up, in front of the telly. When I finally get out of the pose I’m going to tell everyone I know that this game is rubbish and they shouldn’t bother.