You are here: Home / things I learned from my children today / Briefly beachy, tackling issue and a bored boy 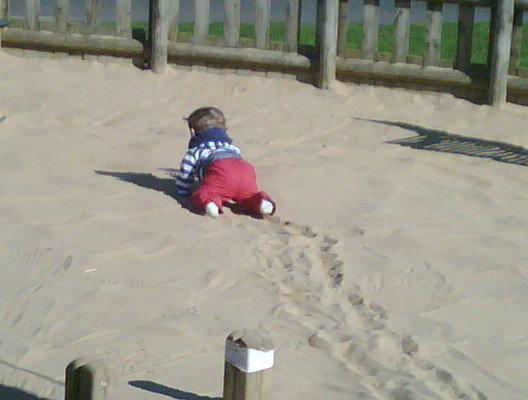 Some things make getting up early on a Saturday worthwhile. This morning Boy Two’s team, coached in part by the Panther of News, was playing at 9am at Gourock’s Battery Park. (I was going to say ably coached, but this morning the PoN was looking slightly less than his shiny self) The sun was blazing and the sand in the play park freshly raked. Boy Three explored, Boy One buried himself in sand and Boy Two’s team won seven – one.

There is a sure-fire measure of how clean a tackle is. Boy Two in the blue jersey and the goal mouth commented as one of the opposition hit the AstroTurf. “It’s OK. It’s not a dirty tackle. He’s not even crying.”

An interest in current affairs might not always seem healthy. This morning, feeding Boy Three, I sat down in front of the telly – just to see if we’re any closer finding a way to run the country, you understand. Do you know that, apart from BBC and the grown-up stuff in the news department, Sky can’t offer anything apart from children’s programmes at 7.35 on a Saturday morning? So the only option was the BBC and its talking heads. Boy One in disgust said: “This is so boring to me. You have to understand that not everyone cares about this. In fact, I think it’s an obsession. I’ll put it off and we can all watch Phineas and Ferb.”