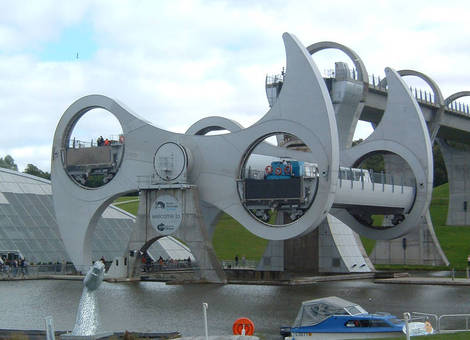 Gorse doesn’t grow in Newfoundland. During a splendid walking, talking, pushing infants morning with sister Super Pharmacist (like Wonder Woman but wearing a white coat over her shiny knickers) we met a couple of Newfoundlanders. We were marching around the woodlands near the Falkirk Wheel and all was the livid green of new spring leaves. The Newfoundlanders were pondering the yellow gorse: “What’s this stuff? It smells amazing.”
SP said: “It’s gorse. Very common here.”
And there ensued a conversation about how gorse flowers could and were made into a delicious alcoholic drink. I was dubious, thinking this tipple would be a tad spiky. However, I stand corrected by River Cottage Hugh. And hot-foot from Falkirk I report SP, her missus, Baby G and their dug all in good order and ready for their move back to Auld Reekie soon.

SSPCA wild animal catching nets are the very thing for fishing footballs out of substations. Boy Two has lost three footballs into the sedate, fenced-in suburban substation next door in as many weeks. Now he’s reduced to kicking and doing keepy-up with other things which isn’t the best for anyone concerned. I mentioned it in passing to our neighbour on the other side of the substation. Neighbour L said: “No problem. I can help, I’ll use one of my nets. They’re in the garage.”
“Oh!” What else could I say?
It turns out, she’s an SSPCA inspector and catching wild animals is her specialist subject. She made short work of rescuing Boy Two’s balls with a very flash looking net on a long pole and some fancy technique. Huge thanks from Boy Two and all the things he was considering kicking.

You can can use a Jamie Oliver blender to make ice cream. I’m writing an article for the Daily Record about how celebrities are bringing their style to our kitchens and pondering whether it’s possible to buy some of Sophie, Nigella or Delia’s culinary style. I’ve been sent a couple of Jamie ‘s kitchen gizmos to have a play with. At first glance, the grill thing looked most promising – panini (aka hot, squashed sandwich) anyone? But then Boy One noticed that the Jamie Oliver blender could, apparently, be used to make ice cream. It’s our mission for tomorrow – does anyone know any good recipes?

◄ Men – mine in pictures
Attack of the tuneless earworm ►