You are here: Home / books / Tigers – coming to tea and turning to butter 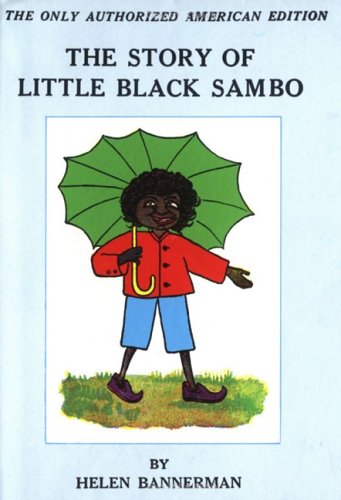 There I was at one of my jobs, subediting for a paper – pushing stories into boxes and making them look accurate and pretty.

It’s a lovely thing to do, a bit like being paid for doing a crossword, that has a pleasant side effect of keeping you quite up-to-date on the news, or at least some of it.
And then I came across a story about which books elderly Scots remembered more fondly than others (Hey, I didn’t promise cutting edge).

One of their favourites was Little Black Sambo by Helen Bannerman.

And then suddenly – whooosh – there I was back on the kitchen floor of my childhood, all red-painted concrete and warm Aga front.

I had the book, I knew it. My colleagues were entirely underwhelmed and somewhat skeptical that LBS got the tigers to run round a tree until they turned in to butter. They didn’t say it but you could see them thinking ‘yeah, right, how’re you gonna get butter out of tigers?’.

So I googled and I found the whole text of the book with the illustrations from the edition I had. You can see it’s a tale of cunning and the triumph of good over evil. Not in the slightest bit racist really. The boy in the story is little, called Sambo and he’s black. And, er, that’s it. More of a lesson about taking responsibility for your new clothes.

I’m much more bothered by another childhood favourite, The Tiger Who Came To Tea by Judith Kerr.

If you aren’t familiar with the work – a tiger rings the bell and comes to tea and eats all the food in the house, including all the water in the tap. The sated tiger walzes off leaving the mother and child unharmed but hungry.

Instead of ringing the police, a national newspaper or the RSPCA, what do they do? They dither in a feckless manner until daddy comes home “he’ll know what to do”, and he whisks them off to the local cafe for a slap up supper, which he pays for. Wait til he gets back to the office and tells the chaps how come his supper wasn’t waiting for him. Later mummy buys tiger food at the supermarket on the off chance…

The messages there about gender roles, ambition and financial independence are shocking. It’s a much better candidate for the banning brigade.

◄ How do you make a shrunken human head mummy? and other imponderables
Nuts in may? Au contraire fairly sane and quite chipper ►