You are here: Home / Abbey and Lisa / X Factor punched its way to new low 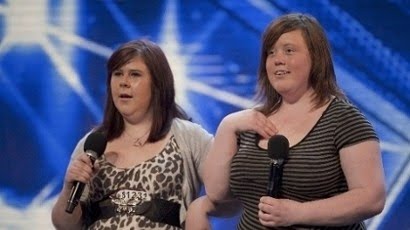 So did we all see X Factor on Saturday. The one where the girl lamped her pal cos her pal said “who are you anyway?” to Natalie Imbruglia.

Well Abbey and Lisa for it was they, were reunited in the offices of Heat magazine.

Apparently they had gone off in a strop so big they had even unfriended each other on Facebook.

However, together again, the pair were doing a live interview that there is the slightest outside chance may have earned them a few quid. That, along with the OK! interview and the joke slot at a nearby nightclub.

They may never be contenders for X Factor, but the lovely Abbey and Lisa would certainly be up there in a person-you’d-least-like-to-be-stuck-in-a-lift-with contest.

They were quick to rehash what happened that fateful night. Abbey said: “I hit her because she was rude. Just so rude. She deserved it. People said afterwards she deserved a slap.”

Lisa, on the other hand, was contrite. She explained how she’d issued several apologies to Simon Cowell which were so well received the forgiving Mr C invited her back on the show another time. She had also written to Natalie and said sorry to pal Abbey.

The whole thing had me confused. OK, Lisa didn’t give a terribly good account of herself and she was taking feisty to a new level, but she didn’t hit anyone.

Abbey on the other hand seems to think she was perfectly justified in whacking her then best friend because she was embarrassed by her lack of manners. Rudeness isn’t really on, but violence never is.

◄ What’s through the keyhole?
There I was tied to some people in a bog… ►