You are here: Home / birthday / Crazy golf: a good wander round a large room spoilt? 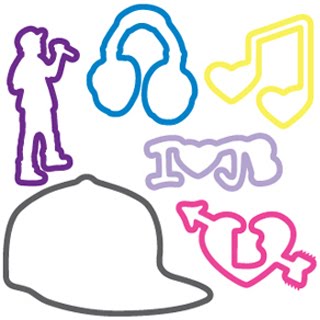 Different approaches can have the same result. Boy One and his friends I and R – along with Boy Two on a best behavior promise – headed to X-Scape’s Paradise Island Adventure Golf for some birthday fun. My view that adventure golf is an oxymoron did not change as the boys hacked and slashed their way around. Boy One barely even glanced at where he was aiming while I and R, who had done this before, almost addressed the ball. In the end it made little difference – R won, Boy One came second and I was a very close third. Boy Two, who should probably stick to kicking sports, trailed somewhat.

The Glasgow touch is unmistakable, however many parrots and plastic palm trees you add. Paradise Island’s Adventure Golf offers a bar and cafe for the complete entertainment experience. On the boasting board the following delights were promised: “Chips and cheese, empire biscuits and Scotch pies.”

I have identified the next Big Thing. Apparently it’s shaped rubber bands to be worn on the wrist and swapped with chums. Boy One’s pal R had an armful. Although none of the boys could adequately explain to me what the point was. For the enthusiastic collector there is even a Justin Bieber version, pictured. It seems my compulsion to pick up the ones the postie drops puts me ahead of the trend.

Cheesy bites are huge. Pizza Hut (getting a mention even though this isn’t a sponsored post) do a cheesy bite pizza. It’s delicious but enormous – possibly the biggest thing humans have ever attempted to consume. They can fly a man to the moon, why can’t they make smaller cheesy bite pizzas?

Drunken adults are hilarious. Fascinating conversation developed among the not-so-small-any-more folk. One lurched back from the Pizza Hut lavvy, staggering under the weight of melted cheese, jelly sweeties and coco cola he had comsumed and said: “Whooo, I’m drunk.” He then collapsed onto his friend amid much hilarity. “How do you know what being drunk is like?” I asked. I was buried in a deluge of anecdotes.
“My mum once got so drunk she tried to send me to bed at 5pm.”
“We go and stay with my aunt every weekend so mum can go to the pub. She stays there until after midnight when she’s drunk.”
“One of mum’s friends was so drunk she kept pulling dad’s scarf in the car. He got so fed up he made her sit in the back.”
I tried to cut through the hysteria with some propaganda: “So being drunk makes you seem stupid then? So maybe it isn’t a good thing… ” But I”m not sure they heard.
Boy Two then asked: “Have you and the Panther of News ever been drunk?”