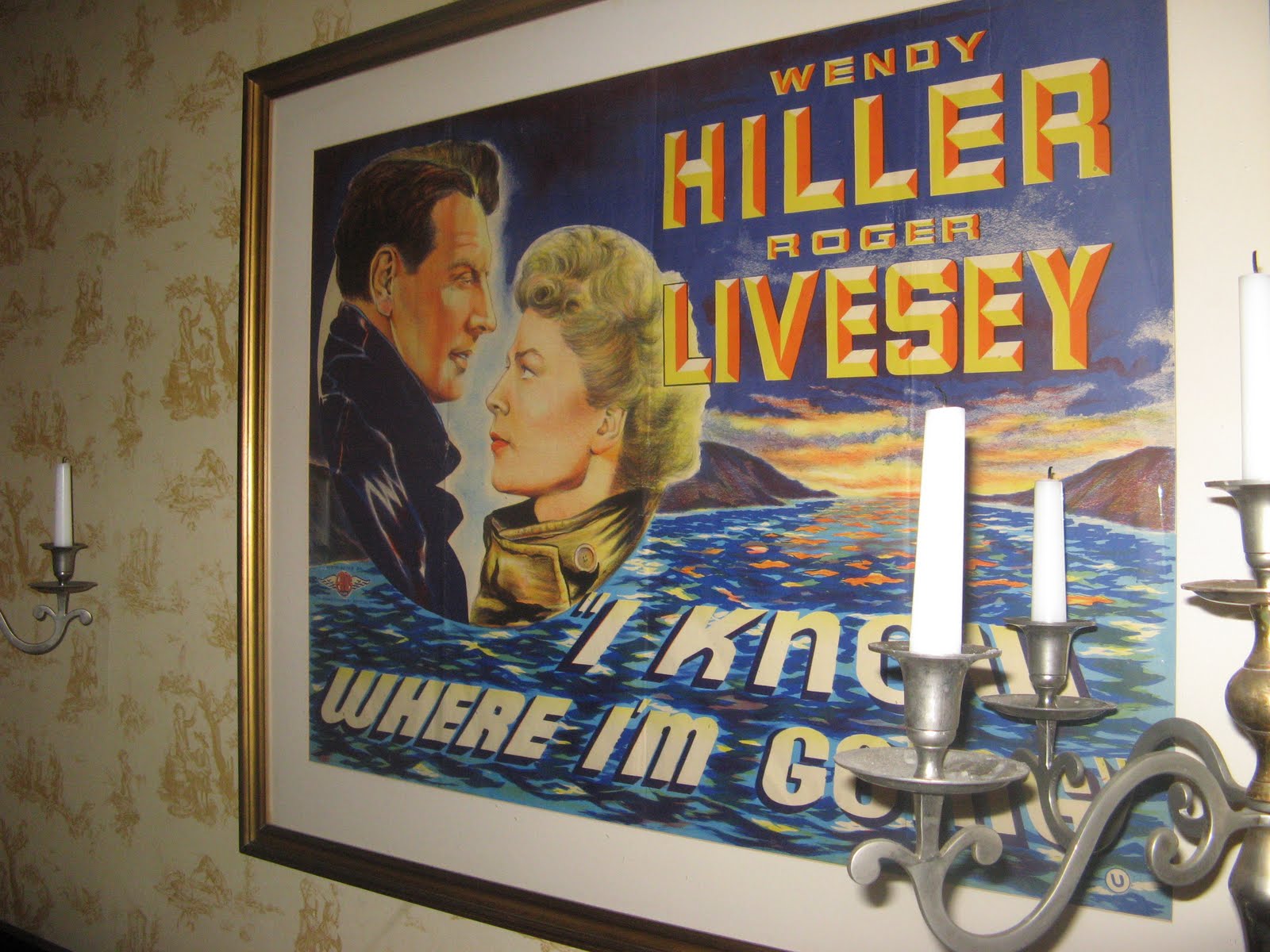 Here I am in the Western Isles Hotel just above the colourful harbour front at Tobermory. The Panther and Boy Three are snoozing and I’m enjoying the quiet.

I’m also trying to solve a mystery. It’s the kind of mystery that would do Agatha Christie proud. There’s a rambling old building, a lounge with over-stuffed sofas and tartan throws, stags’ heads and chandeliers. The cast comprises Americans and Brits, old and young (ish), some speak with plumbs in their mouths while others have clearly spent a lot of money to get here. There are couples, single people and families.

The one thing they have in common is a 1945 movie called I Know Where I’m Going. It a romance made by Powell and Pressburger (nope, me neither) and, apparently, it’s one of Martin Scorsese favourite. He called it a masterpiece. The plot has an Englishwoman heading to the Hebrides to marry a man she thinks is a rich landowner. However Scottish weather in typical style has other ideas and she is stranded on Mull where she is befriended by an apparently pennyless but traditionally dashing naval officer. Ever headstrong she decides to make her own way to her waiting fiance and the naval officer tags along to make sure she gets there in one piece. They, in a roundabout way, find themselves in grave danger in the Corryvreckan whirlpool. Ooh. The hero saves the day and, well, you’ll just have to see it yourself to find out.

The Scottish scenes were filmed on Mull and, while not actually featuring, the Western Isles Hotel is where the couple stay – separate rooms of course.

The reason we are here is that every few years a celebration of I Know Where I’m Going takes place – or IKWIG to its friends – and this year we’ve been invited to join in.

I’ll confess that at first glance, I agreed to come because it seemed like a lovely excuse for a weekend in one of my favourite places with two of my four favourite people and, er, that was it.

Now I want to know what makes these fans so passionate. And they are very keen – think Trekkies in tweed or Doctor Who buffs with a thing about an old phone box instead of the Tardis.

They’re off at the moment on their pilgrimage – a trip to the phone box where the hero books accommodation for the leading lady, a sneaky visit to the Castle of Moy and a boat trip to the whirlpool.

When they come back there will be the enactment of scenes from the film – arthritic knees permitting – a quiz and talks.

There will also be the signing of a sternly worded letter to the authorities about the state of the phone box that Mr Scorseses among others helped become a listed building. BT are supposed to maintain it, in spite of the fact no one has made a call there since about 1972, and haven’t.

I know it’s a good movie and all: well-made and having the special warmth and charm also found in the likes of Withnail and I, Local Hero and The Bridges of Maddison County. But is that enough?

What brought this group – many of whom had never met before the gin and Dubonnet session last night – together? Why has this film captured the hearts more than, say, Ring of Bright Water or the 30 Steps? And what happens on Sunday, do they just go back to their different lives all over the world as if this little interlude never happened?

Meantime, would someone pour me another gin and Dubonnet…