You are here: Home / family / Introducing Housework Half Hour and why I should take up curling 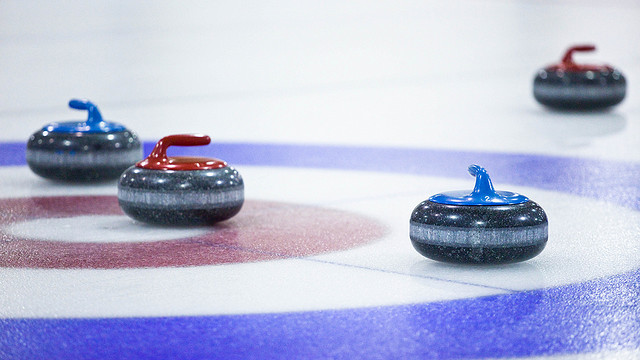 Boy One thinks I should be in the Olympics – the curling team, no less.

I’d like to be flattered by his assessment of my athletic prowess despite never having curled in my life, not even my hair (well OK there was once with a spiral perm, but I’m trying to forget that).

“I’ve never tried curling. What’s it like?” I asked.
“Well, it’s a cross between ten-pin bowling, skating and brushing.” So far so accurate.
“And that’s why you’d be good. You could do the brushing. It’s a bit like Hoovering, so you’d be good at that.”
Oh.

I pressed him a little and he did confirm that he considers his mother’s sweeping skills (or Hoovering, it’s clearly all one to him) to be world class. Largely, he said, because of the sheer volume of practice.

Once I’d stopped laughing, I started worrying. It came hot on the heels of a conversation about who was and was not Alpha in our house. The Panther is the Alpha Male, apparently. Boy One Alpha child, Boy Two Beta and so on. I get to be Alpha female. Hurrah… then “that means you do all the cleaning and cooking and looking after stuff..,” he explained.

“There isn’t any reason why a woman should do all the cleaning, cooking and looking after. Women can do anything men can. There isn’t any difference. Look, I was the Panther’s boss when we first met.”

“But men’s brains are heavier than women’s,” countered Boy One as if that’ll shut me up.

Later peace fell on the household. A couple of the chaps were snoozing, one was watching telly and another playing a game. The only serenity free zone was me, doing stuff. Dishes, laundry, sorting things out – schools stuff, food, cars. You know, the boring, endless stuff.

Then I had an idea – mostly driven by ‘it’s not fair’ and the need to shake them off their sofas.

Housework Half Hour has arrived at the semi-detatched Palace of Bundance. I write a list of chores I consider doable by anyone over the age of seven, everyone over the age of seven must choose a chore from the list and do it, either until it’s finished or for 30 minutes. If there is shirking, slacking, squabbling or spurious fecklessness, extra minutes will be added.

They don’t like it, but then they aren’t supposed to. I’m hoping it’ll make the appreciate how dull but important doing stuff is, even for a little while. Maybe, having achieved a modicum of domestic progress they won’t be so keen to see it undone… “get your boots off the rug, I’ve just Hoovered it”.

And if that doesn’t work, does anyone have Rhona Martin’s number?

◄ Cambuslang man has to climb ladder to flush toilet
Who’s been shitting in my bed? (apologies to Mrs Bear and her family) ►