You are here: Home / Kate Middleton / Kate expectations: The pop princess and the commoner queen 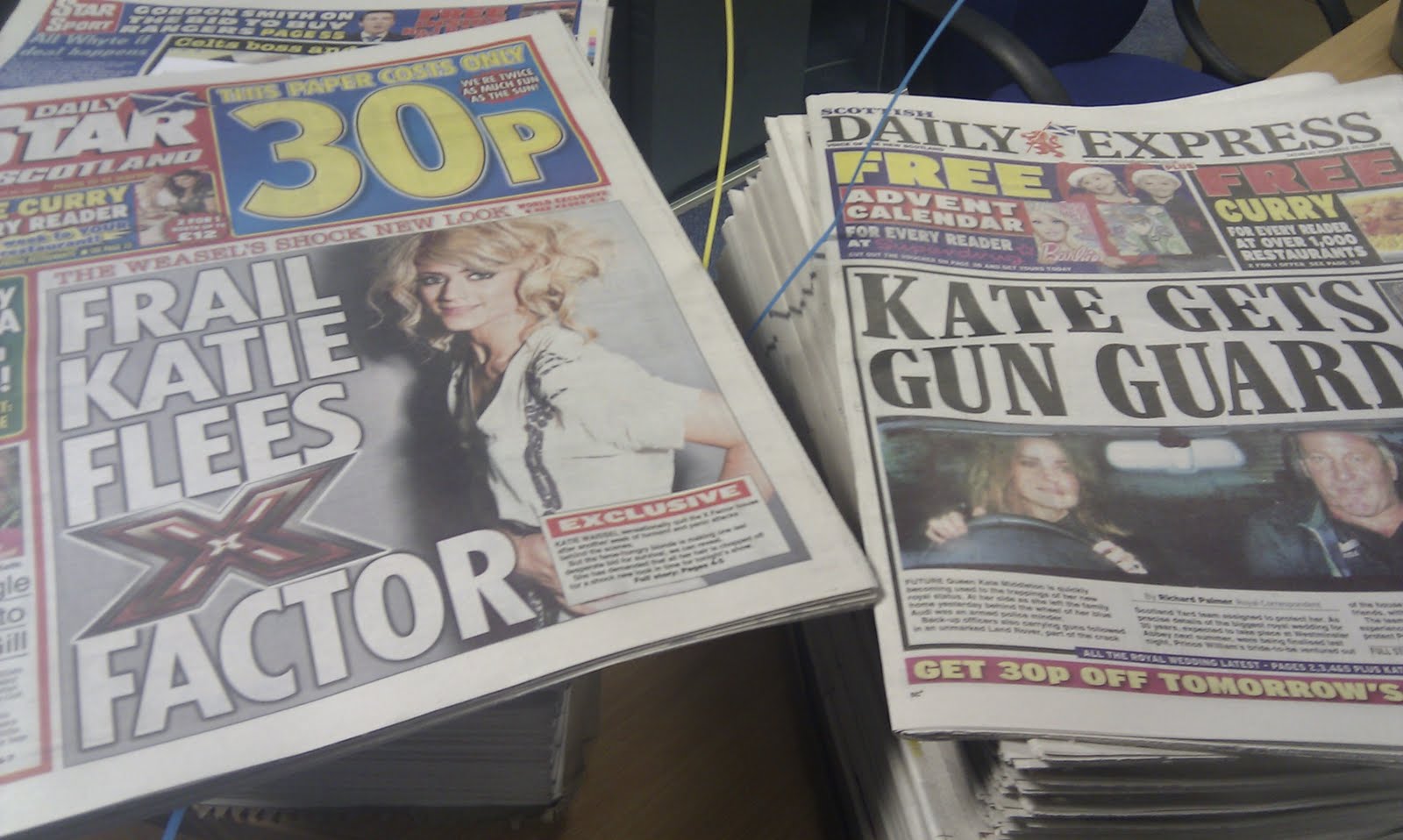 Look at this. Today’s front pages – Kate flees X Factor and Kate gets armed guard. Different Kates, but you know which is which, don’t you?

One is Katie Waissel, universally loathed X Factor survivor. Famous for thinking she can sing – which she can a bit – and wanting to be a star – which she likely will be. She puts me in mind of a young Madonna – more than enough brass neck to see her through the lean times and gaps in her ability. (Disclaimer: I can’t carry a tune in a bucket but it’s my blog so I can pass comment on whoever I like.)

The other is Kate Middleton, Queen of Hearts in waiting and cool brunette who has accepted the proposal of Prince William and will spark a thousand copycat frocks and lots of nasty souvenirs. The Daily Mail is already fretting about her similarity to a royal nanny and the Express has found a replacement for the Diana Effect.

Obviously I’ve never met either of these women although I’ve written and edited screeds on them already. I have a feeling my relationship with them is going to be a long one.

I’m no Mystic Meg, but I predict Ms Waissel’s run in the X Factor won’t last much longer. As Queen Louis might say: “You just don’t have that loikability.” Thereafter she’ll spend a day or so in the Priory for “exhaustion” coming out in time to take up a lucrative role in panto. Next year she’ll release a new album that the world will declare “quite good actually”, give a cracking interview to Graeme Norton and conduct a public romance with the star of an American vampire movie.

Then, sigh, to the other Kate. She will be guest of honour at a sedate and glamorous hen night in a smart London night spot before gliding up the aisle in a frock that makes the career of a young British designer.. and dozens of designer rip-off factories. Wedding plans of thousands of brides will be thrown into chaos as they either emulate or – as their plans have been in place for years – seek to distance themselves from the cheer-up-the-nation wedding of the decade. Observers, falling into two camps, will either wish her haunted by her tragic mother-in-law three-in-this-marriage style or see her as the new face of the monarchy. (She’s middle class apparently, one of those middle class chicks who went to Marlborough and hangs out with Richard Branson’s progeny.)

Somehow, it has already been decided that Ms Waissel is a manipulative and ambitious cow while Ms Middleton is a saintly and serene goddess who will rescue our future king from whatever he needs rescued from. But that’s all based on really not very much, so let’s give both Kate’s the benefit of the doubt and hope they won’t start to live up to their own publicity. I’d like to see Katie W becoming a national treasure and Kate M breaking out and taking her turn in the Vagina Monologues.

◄ Bogie man alert, what would you do?
CBeebies Song Time – it’s worth the money ►