You are here: Home / Feminist / Am I a feminist?

This week I was asked when I knew I was a feminist. That remarkably good question was posed by Transatlantic Blonde. She has hosted a regular Feminist Friday slot at her blog.

She got me thinking: Am I a feminist?

Well, it makes me furious that men get paid more than women for doing the same job. I rage that women get become insignificant at work once their work-life juggles become conspicuous. I think it’s just crap that some girls aspire to be only someone’s wife. (I’m not saying that being a good wife/mother/homemaker isn’t important and sometimes difficult, but it’s hardly splitting the atom. In my book, kids should start off with the loftiest goals and work down.) It also makes me cross that some men really, really, deep down don’t think women are their equals – it’s almost impossible to prove (and why should we) but you just know.

So, yeah, I am a feminist, just probably not a very good one.
For a few years, I worked on the Daily Star. Proper feminists wouldn’t do that. The paper features pictures of women with no shirts on because men like to look at breasts. That’s true, but I also believe it’s one of the most honest newspapers of the lot. It promises nothing more than an entertaining 15-minute read during one’s lunch break.

I gave up the battle to have it all. It was just too exhausting so now I work from home and my husband has the Big job.

I quite liked being wolf whistled (note, past tense as I’m over 40) but then, when I was bigger of bosom, men passing comment about my chest (they always said it was a complement) made me shrivel inside. That confused me.

While no women is to blame for being raped or otherwise assaulted, I do think it’s important to take responsibility for your own safety in general. I mean you wouldn’t leave your purse stuffed full of £50 notes, lying open and abandoned in a public place, would you? (UPDATE: I realise I’ve been as clear as mud here. Rape is rape and women should be free to dress exactly as they like. In any case, it makes no odds as rape is about power not ‘sexiness’. My point, without wanting to open a can or worms, is that it’s important neither to become unnecessarily vulnerable nor to live in fear. Neither will help.)

I like the trappings of being a girl, even if I’m not always the most accomplished with them. I like lacy bras, hairless legs and armpits, and high heels.

My biggest failing, though, is that I’ve never done anything to help other women. I’m just not sure I’m awfully good at ‘sisterhood’. (Except, hopefully with my real sister)

But to answer Transatlantic Blonde’s question: when did I realise I was a feminist? My first answer to her was that it was when men spoke to my tits not my face, but it wasn’t then – that just astonished and amused me. 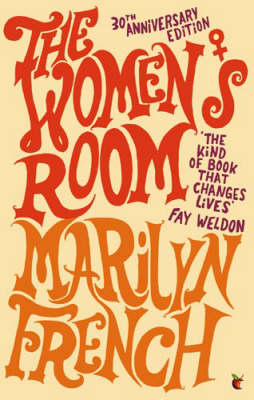 It was when I read The Women’s Room by Marilyn French.

It tells the story of Mira Ward’s life as she meets various women who are variously screwed over by various men. She, herself, is dumped by her husband who was almost certainly cheating on her. Not to worry, her kids have left home so she picks herself up and goes off to university and enjoys a personal renaissance. Then, though, she meets a man – a younger, hotter, more modern guy – and they set about having a blisteringly sexy relationship. All’s well until she realises he wants her to go to Africa with him, giving up everything she’s worked for, in order to be the mother of his children.

This was the point for me, to answer the question. I wept for Mira. She loved her man, but he wants kids and kids would mean her giving up everything else she wants.

That’s the sticking point – you can’t properly fly high when you’ve got kids. Or you can but the effort will nearly kill you. And the other way round, you can’t give your kids what they need at the same time as giving yourself what you need. It’s just impossible.

So what’s to do? Lord knows. But more men who do more at home and with their kids would be a start. How about childcare that is affordable and guilt free? Let’s chuck out the idea that work should happen from 9 to 5.

And perhaps the biggest thing? I know I said I’m a rubbish feminist, but I’m not half so bad as many women. Girls, if you really want equality then take action. Stop dissing your man’s efforts at childcare and domesticity. Never, ever, tut, roll your eyes and say “men”, they are not overgrown children with no emotional maturity. Pay your way. Don’t let him get away with suggestions that you are in any way inferior to him – the only thing he can do, you can’t is pee standing up. Oh, and, if you can manage all of this while looking sexy and not loosing your sense of humour, that’d be great.

UPDATE:
Having thought about it over night I’d like to add two points.
I don’t shave my armpits because I like it, I do it to conform.
The other thing ‘They’ should do to improve matters is force everyone (particularly male people) to read The Women’s Room.