You are here: Home / Austria / Giveaway: Real Body Cream tested on a toddler? 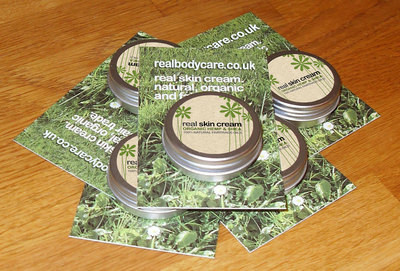 I’m a sucker for smelly things in pretty pots, so when I was asked to review Real Bodycare‘s Real Body Cream I said “yes”. I’m easy that way.

They send me three dinky little pots and I had a quick sniff. Very nice, I thought and promptly put them down on my desk. Now, if you’ve seen my desk you’ll know that could be an issue, seeing as how there is a great deal of stuff on here. However, I rarely lose things for all that long…

But then Boy Three got involved. One of his favourite games, when he’s not lobbing things, is to post things. Currently this involves everything he can lay his hands on into the basket of his buggy via the hood. I like how his game clears my desk but I am somewhat challenged by what it does to my finding things stats.

So, the three little tubs vanished for a while. Then I discovered them in the hunt for the stuff we’d need for holidays – so the tubs came with us to Austria.

However, my relationship with the rosehip and shea was somewhat shorter than I anticipated because Boy Three got hold of it. Within seconds he had emptied the little tub, some on his face, some in his eyes and the rest in his mouth. It’s probably not a test that will catch on, but I can confirm that it doesn’t irritate the skin and eyes of a two year old and, fairly obviously, tasted quite pleasant too.


If you’d like a pot for yourself, I have a lovely big one to give away. Just leave a comment and tell me which flavour you want to try.