You are here: Home / review / Red Rover, Red Rover – did this game win us over? 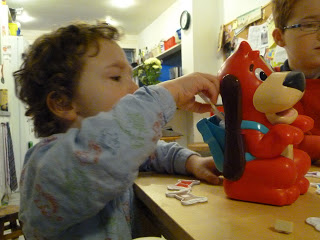 Was the Red Rover game by Mattel a boy’s best friend or a pitiful pooch?


The game is very simple, it’s a talking dog that asks for certain colours, numbers or shapes of bone. Players need to find them and stick them in the dog’s mouth.


There are two levels, one where the dog asks for colours and a slightly more complex one where the dog wants shapes and numbers. Mattel recommend it for children aged three and over. Boy Three is two and a half, but he was very taken with the talking dog and the fact the bones fit in the dog’s backpack. Boy Two very patiently played with him and it is an excellent game for children of different ages.


How irritiating is this game? Lord knows we don’t need anything else that talks in this house, but as speaking toys go, this one isn’t the worst by a long chalk.


Battery bind? It does take three AA batteries, but isn’t too hungry. The first set I put in are still going strong.


Mummy feelgood (aka how educational is it?) It rates pretty highly because it reinforces colours, shapes and numbers. Also it’s pretty good for teaching turn taking and game rules.


Will it break? Ours hasn’t yet and I have three not careful children and hard floors.


Best bit? The bones go in the backpack so it’s less likely to lose the pieces. If I was empress, then I’d make a law that all games and toys had to be self contained in all their parts.


Worst bit? The nose button isn’t so easy to push sometimes it takes a couple of goes. A more positive action would be better.


Disclosure: we were set a Red Rover game to review. 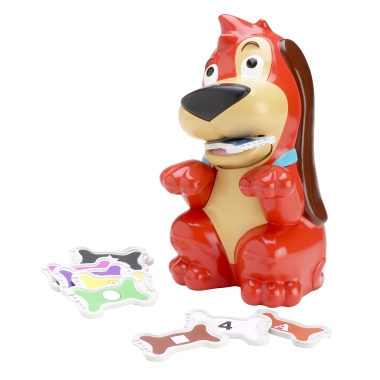