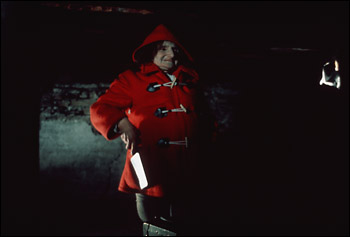 Once upon a time there was a nation and that nation was up the proverbial without a paddle. The rulers of the nation had borrowed lots and lots of gold to buy shiny things for the people.

Now, after a while the people had got used to a certain amount of shininess and didn’t really see why they should give it up. Especially as – inevitably in matters of shiny things – some people had loads, more than they’d ever need, and others were having their favourite baubles, the ones they were saving for later, snatched from under their noses.
The upshot of all this was that many people in the nation were cheesed off. Some, particularly those who worked directly for the nation and its rulers, reckoned they’d had enough. And so it was decided there would be A Strike.
Up and down the nation people put down their tools and whatnot in the hope of making A Point.
Strikers included the child-tamers of the nation. This was good news for the children in the land were delighted. They had an extra day off – although some were already due to stay at home down to the benevolence of King Eck the First and it being St Andrew’s Day. Their parents were much, much less delighted. Some, especially those who didn’t work for the nation, but worked for themselves, were lumbered.
So up and down the nation, children went to work with their parents – some helped out but more just slumped in the corner playing on their Nintendo DSi and sighing.
Also in this nation was another Chap. His trade took him into many businesses all across the land. On the day of The Strike he was out and about as usual. Only, being an observant Chap, he noticed that many of the businesses he visited had at least one child hanging around it like a bad smell.
The genial Chap took to commenting on this, breaking the ice if you will. “I see you’ve got your little helper in today,” he said.
But then in one business, our bold Chap’s comment was met with silence. And in the silence the “little helper” turned round and revealed herself to be a very, very short, but entirely grown-up adult woman. And this woman didn’t look happy at all.
Our hero, realising that little good could come of an explanation, fled.
The moral of this entirely true story is that you must never make assumptions, must look before you leap and when in doubt say nowt.
Thanks to the Chap for telling me this tale, it fair brightened up my day. And thankfully for him, while his story had similarities to that scene in Don’t Look Now, there wasn’t a meat cleaver in sight.
Tweet