You are here: Home / Centre for Modern Families / What shape is your family? 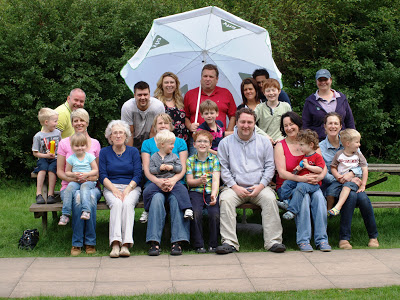 That is my family in the picture. Or most of them. The picture was taken after a fantastic family weekend to celebrate my mother’s 70th this summer.


I’m showing you because just this week a survey shows that British families are no longer ma, pa and the 2.4 weans.


This group that is my family contains divorcees, cohabitees, married couples, couples together but not cohabiting, singles, widows, first marriages, second marriages, civil partnerships, donor insemination kids, out of wedlock kids, siblings, half siblings, step relations and probably a few others I can’t think of.


The easier bit is to define what this family does. It supports each other, it looks after its children and other folk who need some TLC, it tolerates each other’s funny little ways and it understands that, when the chips are down, family will be there.


However, I have long held the view that the rest of the world hasn’t quite caught up with what my version of family really means.

So it’s good news that research from a new think tank backs up what many of us have known for a long time. There is no one-size-fits-all family, and, more importantly, neither should there be.


The Centre for the Modern Family, which is funded by Scottish Widows, says only 16 per cent of people consider they are in a “traditional” family, which isn’t very many.


It also found that almost a quarter do not believe their family is valued by society with, 18 per cent saying they feel judged because of their family set up.

One of the Centre’s experts Professor Tanya Byron, of The House of Tiny Tearaways fame,  said: “Family is the spine of society. Everyone comes from a family, everyone has an opinion on family, and without this vital support network many of us would simply break.

“At a time of continued social change and as the financial squeeze on families gets even tighter, The Centre for the Modern Family aims to improve understanding, and ultimately strengthen families – in all their varied forms – across the country.”


Here are some interesting facts about today’s British family:
• 84 % of families define themselves as not being traditional
• 25% of couples are childless
• 3% of the population define themselves as being part of a multi-generational household
• 25% of people over 60 live alone with no family nearby
• 20% of the population now lives alone
• 50% of the population believes that society has an outdated view of the family
• 57% of people believe that a couple with children do not have to be married to be a proper family
• 20% of people feel that their family does not give them enough personal space
• 22% of people do not feel their family type is valued by society
• 59% of people see gay couples as a family
• 77% see single parents as a family
• 75% of people say they are religious but only 40% say this impacts upon their way of life or their family life


So, what kind of family have you got? Are you judged or valued because of it?