You are here: Home / high visibility / On reflection: an excellent idea for a walk in the dark 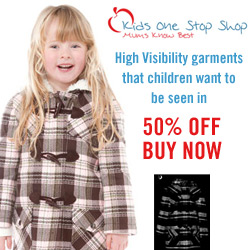 It’s winter in Scotland so we don’t see much daylight. Weeks can go by when we scamper around with our pupils dilated like pit ponies in perpetual gloom.


So if we want some fresh air we have to put up with dark air. On several occasions we’ve got booted and scarfed and trotted out under the night sky for a walk.


We were out one beautiful clear evening, watching the stars “you know where the Dog Star is because it’s near Orion’s Belt and it’s serious (Sirius)” and jumping in puddles.


Then a car came along. The Boys are fairly well trained and a yell of “car” has them leaping to the verge and standing like statues. Except at night, against a hedge they were almost invisible.


Oh yes. Those reflective cuffs and flashing armbands in the kitchen drawer. Yes, them. We should have had them on.


“Turn your faces to the car,” I instructed hoping their white cheeks would at least glow a little in the headlights. But I knew that if I was the driver I’d be muttering “what the hell are they doing out there with kids at night IN DARK CLOTHES”.


So a day or so later I was asked by Kids One Stop Shop to try out a B-scene jacket, I was obviously going to say “yes please”. It was such a perfect solution – reflective stuff to be worn all the time, not left in the kitchen drawer.


And when Boy Two’s jacket arrived, I was pleasantly surprised. I had somehow imagined sewn-on high vis stripes or somesuch. No the reflective stuff is in the fabric of a jacket that actually looks very cool… and warm at the same time.


Boy Two loved it, although he did grumble that when he wore it unzipped to play football the tiny plastic bit at the top of the zip scratched his neck. I washed it and warned him to do it up and he hasn’t complained again.


The B-Scene gear – there’s also a duffle coat for girls – is an excellent idea and I’d love to see more styles and more colours of fabric. Also, how about a waterproof version?


Meantime, there’s a cracking offer on these coats, what


Disclosure we were sent a boys bomber jacket by Kids One Stop Shop to try out.

◄ Readysteadyblog: gin, hearth and bees – or meaning more than we say
New media breakfast: breaking the rules… or not ►