You are here: Home / author / On tour, Discovery at Rosehill – a spooky treat 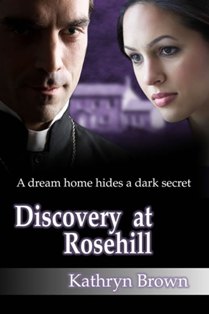 Book Review:
Discovery at Rosehill by Kathryn Brown
Why I read this book: This is the first novel by brilliant blogger Crystal Jigsaw. I enjoy her blog and so when I found out she’d written a book it was an easy decision to buy it.
What the blurb says: Finding your dream home is difficult enough, but what if you find it and then discover it was haunted?
Camilla realises that she could at last have found her true love. But further spirit contact confirms that Marcus harbours a guilty secret.
What’s it about: It’s a love story with ghosts, or a ghost story with love.
Did I enjoy it: I couldn’t put it down. Really. It’s a proper page turner. The romance is gripping, but the description of the spooky bits fascinating. There’s a real sense of place and you never see the twists coming.
Here’s what I was prompted to ask Kathryn.
They say we write about what we know, how much of Camilla is based on you?
Many aspects of Camilla are based on me, particularly her paranormal experiences of which she encounters at Rosehill. Several of the experiences are my own but I decided to fictionalise them and make them Camilla’s, thus writing them from her point of view.
She’s quite a lonely character, likes to spend time alone which is exactly the same as me. Her romantic interests aren’t dissimilar to mine either in so far as she is particularly nostalgic. However, I’m happily married to a farmer, unlike Camilla who wishes to pursue a romance with the village priest.
Do you have experience of mediums?
I have a good friend who is a medium and even though we live several hundred miles apart, I have learned a great deal from her. Lorraine is a natural born medium who doesn’t take her gift for granted but helps others to accept a life beyond the one we are so familiar with. She helped me considerably whilst I researched Discovery at Rosehill and assisted me in building up the mediumship side to Camilla’s character.
I’ve seen many mediums over the years, the first one was back in 1993. That woman triggered my intense fascination with the paranormal after she confirmed my suspicion that my grandmother was around me. Describing not only my grandmother but my grandfather also, she gave me an accurate picture of how she saw them both, sitting together in a black and white photograph. Since moving into my farm house, I have learned that I am surrounded by seven male spirits, some of whom I know, others whom are previous occupants of the house.
And Marcus, is he based on someone you know? He’s very dishy.
Yes, he is dishy isn’t he?! The only person I based him on is a very famous actor whom we all know as Martin Shaw. There was no reason for this other than I completely idolise Mr. Shaw, find him incredibly attractive and totally love his acting – and now I need a cold shower! I dare say I have a fascination with priests also, but I didn’t have anyone I know personally in mind, when creating Marcus’s character.
If it was made into a film, who would play the main parts?
Well wouldn’t that be something?! I know exactly who I would want to play Marcus of course; having seen Martin Shaw in many television programs including one where he played an exorcist priest, called Apparitions, I’m quite sure he would be perfect to play Marcus. I think the character of Camilla could be a difficult one to cast because I have based her so much on myself. Maybe I could do it…
Marcus and Camilla are such good characters, are you going to use them again?
I’m not sure. I was thinking of writing a sequel to Discovery at Rosehill but I decided to go ahead and write my second novel Hideaway, of which I’ve now finished the first draft. I’d like to bring Marcus and Camilla back to life one day, but it’ll have to be a very strong plot in order to work. Many sequels aren’t a good idea, unless you’re a hugely successful author. As we see often, the first book or film can be wonderfully received, yet with the second, people will naturally compare them. I guess my answer to that question would have to be….”watch this space!”