You are here: Home / CBeebies / Hands up if you find Justin Fletcher fascinating 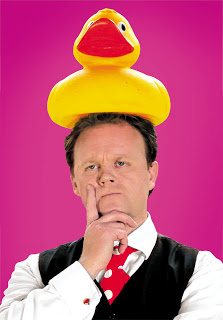 We love Justin, Mr Tumble, Shaun the Sheep, Gail Force, Anna Conda or simply Justin. He’s fantastic doing Makaton, falling over and especially looking in the spotty bag. I’ve spent hours gazing at him – while the kids watched, you understand – trying to work out just what it was about him.


So it was with great excitement that we put his new CD – Hands Up The Album – in the machine and cranked up the volume. (We are among the lucky few to get a sneak preview – it’s available soon.) Within minutes we were all jigging around the kitchen. All of us, that is, except Boy Three who was having a puberty moment and saying: “Stop it now please. This is soooo embarrassing. Please stop. It’s horrible.”


We ignored him and carried on to the Hokey Cokey, Music Man, The Teddy Bear’s Picnic.


“Stop it. I hate you,” as Boys Two, Three and I did Head Shoulders Knees and Toes, Nellie the Elephant and The Wheels on The Bus.


Proper good old fashioned top-of-your-voice fun for everyone, unless you are of a certain age like Boy One.


So Justin would still be on my Christmas card list if I had one, not least for giving me another guilty indulgence… singing along to his CD. So far, I have resisted putting it on when the kids are out, but they don’t have to be in the same room for me to be giving it: “At six o’clock their mummies and daddies will take them home to bed…”


Thank you Justin for some good clean fun.


Disclosure: we were sent a copy of the CD to review.


PS Is it me or is JF’s utter goodness and wholesomeness slightly unsettling? Does he have a dark secret?


Note: This was originally published last year, but taken down at the request of, ahem, Justin’s people because the album release was delayed. It’s out now which is why this is back up.