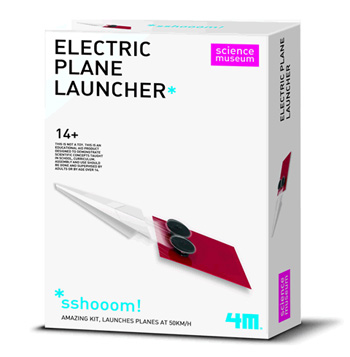 OK I am a little late to this party, but if the National Science and Engineering week lasts ten days then I think it’s fine to join in at the end of the week. Perhaps they have achieved, by science and engineering, time travel.
National Science and Engineering week ran from March 9 until today and there were loads of events on the theme our world in motion. See, I told you there was time travel.
There were more than 4,500 events throughout the country – none of which we attended. However, it’s through lack of interest in matters sciencey. Regular readers will not that this is the family geek when it comes to outings and we are regularly to be found in the Glasgow Science Centre, or any other boffiny part of a museum. The Edinburgh Science Festival next month is already ringed in the calendar.
However, we did take part in our own little way. We were sent an Electric Plane Launcher kit to celebrate the event.
It is for launching paper planes by means of electrics rather than launching electric planes, if you see what I mean.
Boy Two – who is nearly ten – fancied having a go, although the kit is aimed at slightly older children.
It didn’t take too long for him to construct it, but what it required was carefully and symetrically folded planes.
What was good?
When we finally got it to launch planes that didn’t jam or nosedive, it was impressive. Very satisfying.
What wasn’t good?
It requires patience and attention to detail.
Boy Two’s opinion: “It was very, very, very, very, very fiddly and does not work unless you fold the paper plane right. But it was good when it worked.”
◄ Silent Sunday
Review: 3D Eiffel Tower puzzle by Ravensburger ►