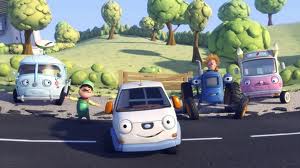 Just when you were sure the world of children’s TV didn’t need any more talking vehicles, along comes one that leaves the peculiar Animal Mechanicals and deranged inhabitants of Bob’s builders yard in the shade.

Introducing Olly The Little White Van.
He’s white, van-like and tries to help. He also has a nice line in irritatingly catchy songs and is voice by the ubiquitous (but we don’t mind really) Justin Fletcher.
Where can I find him? He’s on CiTV, on the internet at ollythelittlewhitevan.co.uk and, unsurprisingly, there will be toys and games on sale after Easter.
What’s good about Olly? He’s cute, the stories make some sort of sense and he does try to help which is a good message for kids. Most importantly, though, Boy Three loved him – and demanded more “van”.
What’s bad about Olly? Did I mention the irritatingly catchy music? And the whole thing has a vaguely familiar air about it, but let’s not split hairs about whether or not kids’ shows need to be innovative.
Overall: Olly is the kids’ telly equivalent of the nice boy your mother loved when you brought him home.
Disclosure: We were sent an Olly DVD to review.
PS There is a competition running on Olly’s website giving children a chance to feature in the titles of the show.
◄ Hands up if you find Justin Fletcher fascinating
Silent Sunday ►