You are here: Home / comfort / Review: Josef Seibel sandals (sunshine not included)
LATEST UPDATE: The people at Seibel contacted me and offered me a replacement pair. They were apologetic and certain that their shoes shouldn’t behave in such a way. After all, they pointed out, if I had bought the shoes I may well have taken them back to the shop. I’m not sure I would because I’m lazy that way. However, I’m delighted to report that I’ve worn the replacement sandals a couple of times and they have, so far, performed beautifully. And I have got round to painting my nails a coordinating shade of blue.
UPDATE: I have worn these sandals a few times now and am becoming slightly disappointed. The Velcro on one foot in particular doesn’t stay done up very happily and so I spend the whole time refastening this. At best this is annoying and, at worst, dangerous. On a recent trip to the beach I found my foot sliding out of the sandal. They are still very comfy if you don’t walk anywhere. If I hadn’t been given these to review, I would be returning them to the shop.
This post could also be titled ‘Instagram for lazy cows who can’t be bothered to paint their toenails’. 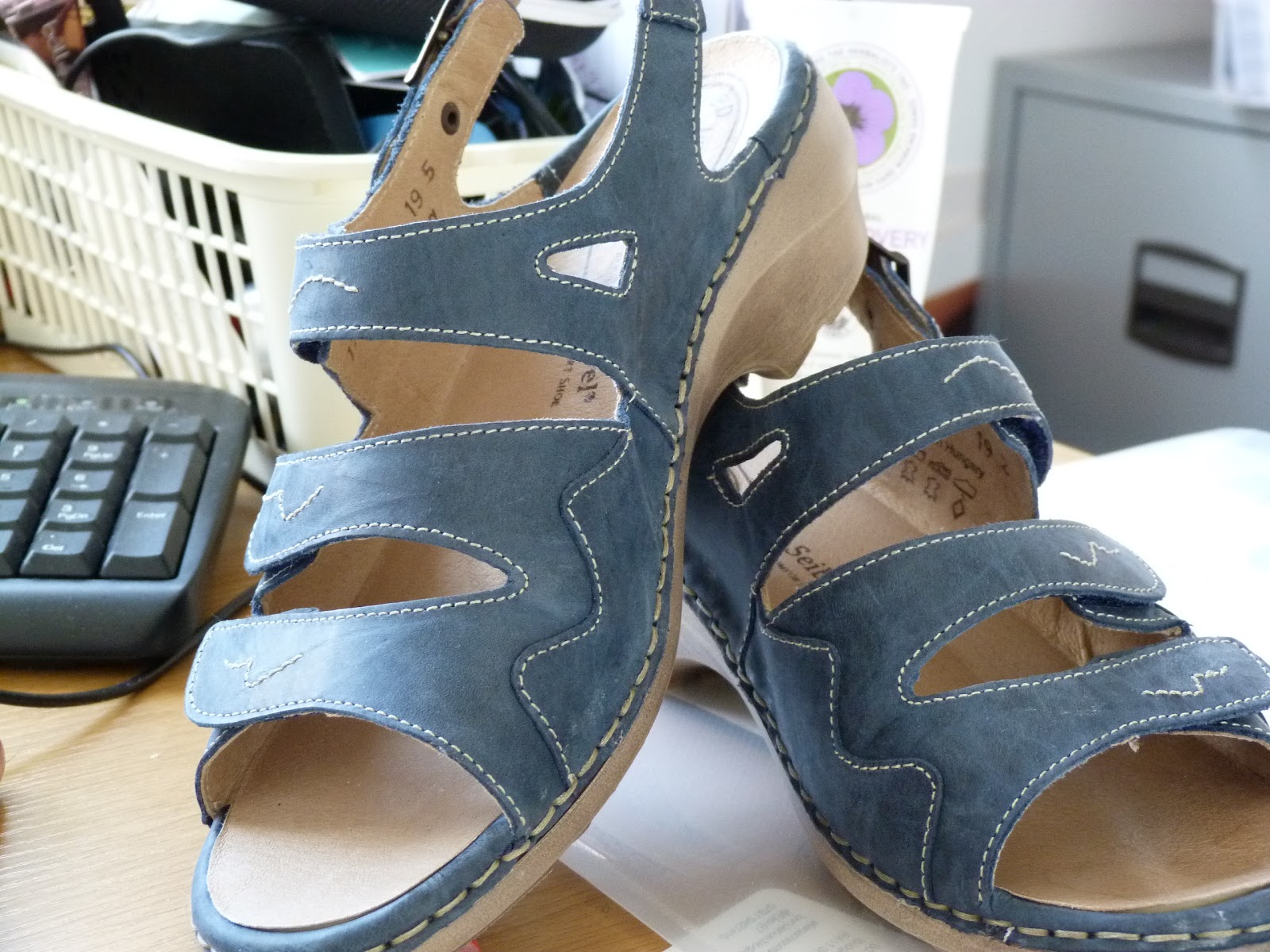 I got these sandals from Josef Seibel to try out and I was delighted when they arrived a couple of weeks ago… because the sun was shining. I imagined shorts, linen trousers and so on. However, the sky has remained resolutely overcast ever since – plus, it’s been more than a bit parky. My lovely new sandals have remained thus – nothing other than a stumbling block on the bedroom floor.


But, it’s time. I’ve had them long enough. I need to let you all know what I think.


So I dashed out from the warm zone – about 2m from the little heater that hides under my desk – to the arctic upstairs and grabbed them and put them on. Oh, but they are so comfy.


Almost comfy enough to forget that it’s Baltic here. But not quite.

But then I realised there was a problem – because I’d been skipping about in boots and thick socks for some time, my tootsies were somewhat neglected. My nails weren’t gloss and the heels dry and dull looking. Not pretty.
What to do? Paint, buff and moisturise? Er, no. Sign up to Instagram and hope the fuzzy effect would make things look Ok. Did I get away with it?


Comfy, comfy, comfy. Did I say they were comfy? But also I think they look fine, they have enough heel to reduce flat-shoe waddle and I like the colour. Velcro fastenings mean they’ll work at whatever stage of footswell you have.


Very little. Perhaps they aren’t ladylike or elegant, but that’s not what they’re for. Oh and I’m going to have to attend to my feet before the weather warms up. No rush then.
It’s possible the Velcro could become a bit annoying as, in this house, I sometimes kick through piles of laundry the way lovers do through fallen leaves. This means I could end up being accessoriesed by a dirty sock or two.


Mr Seibel has come up with another versatile, comfortable sandal that, once summer arrives, I will wear to death.

◄ What do you do when your hero’s a scumbag?
Happy Birthday blog ►