You are here: Home / cinema / The Angels’ Share – putting sex appeal into a whisky glass

The Bridges of Maddison County had me leaving the cinema sobbing, after In The Loop I was sniggering in a deranged manner, The Hunger Games had me empowered, while Twilight utterly revised my opinion of vampire flicks.


But this week I left a picture house with a yearning for a drink… not just any drink, a fine malt whisky in one of those beautiful glasses with a heavy base. Such is the effect of The Angels’ Share…


This new film by Ken Loach is about a young father who is determined to find a way to a better life for his family. A visit to a distillery gives him an idea of how to do it.


It’s full of the kind of pawky Scottish humour that put Local Hero and Gregory’s Girl into the national treasure casket, plus some romance, drama and a few posh folk being made prats of.


Apart from my pal Mark, who appears in the first scene and does some very convincing paper shuffling, two things emerge as real stars.


The first is new boy Paul Brannigan. He’s the real deal, born to drug addict parents and ended up inevitably in jail where he taught himself to read and speak by consuming dictionaries and Newsnight. He also has that same kind of intensity found in fellow countrymen James McAvoy and Robert Carlyle – wouldn’t merit a second glance in the street but once you start watching them you can’t stop.

The second outstanding feature is whisky. The warming and intense amber liquid. Not, at first sip, even nice, but once you get the hang of it… See where I’m going here?


I’m not a fan of the dram fool old farts’ school of Scotch bullshit, but a good whisky – with a splash of water if it makes you shudder – is really lovely. I’ve been able to tell all sorts of things – berries, smoke, fish or even TCP – that a more discerning palate would spot in fine wines. Gooseberries anyone?


Whisky, like some Scottish films especially those whose reviews feature the phrase “gritty realism”, is perhaps not at the top of your must consume this weekend list, but I’d urge you to think again on both counts.


The Angels’ Share refers to the quantity of whisky that evaporates from the casks, I’d say let the angels have theirs but make sure you pour yourself a dram and watch this film. 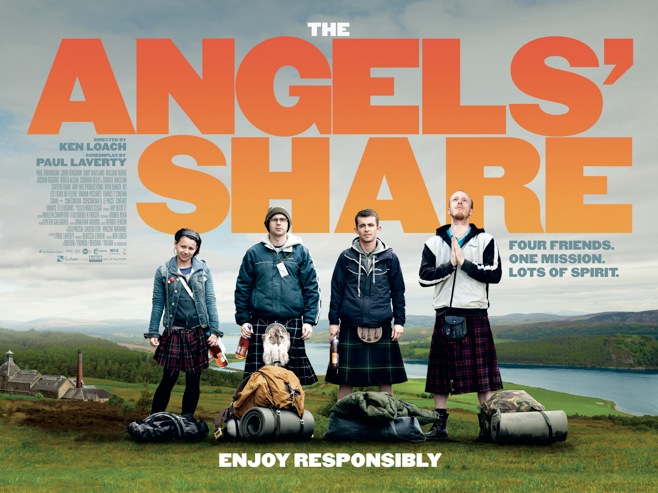 ◄ Scotland to Cornwall – 569 miles to misery… or not?
Saturday is caption day… ►