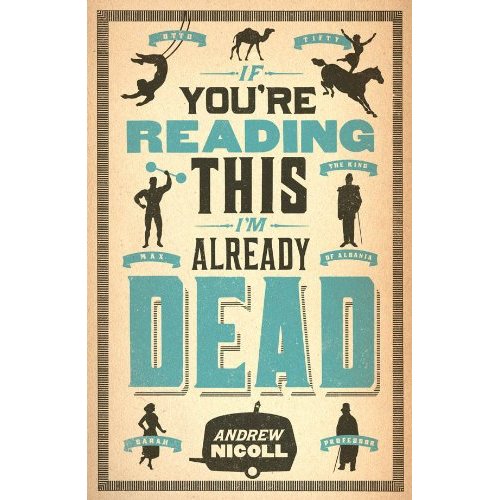 I commend to you Andrew Nicoll’s latest novel, If You’re Reading This I’m Already Dead.


Andy is a fellow news predator to the Panther and all-round good egg, so I’d read and buy his book anyway. However, it’s much, much better than that. A cracking read and worthy book-group discussion choice.


For a writer who is a chap, Andy does draw some interesting women. His gals line up in order of, well, various things – virtue, allure, ranking in hero Otto’s affections.


The fragrant Sarah is the beautiful and loyal daughter of blind professor Alberto von Mesmer. She doesn’t put it about  much, saving herself for special occasions… mostly involving Otto. She fancies herself as his queen and hardly ever puts a foot wrong. Otto says Sarah “wasn’t that kind of girl” and, eventually, somewhat reluctantly, sets all the others aside.


Tifty Gourdas, self-professed Magyar countess, could “dance to set the sawdust on fire and she knew how to strip”. She’s also a generous sort, often known to keep Otto and his BFF Max warm on chilly nights. She has her limits, however, and gets quite frosty with Otto when he reaches them. She has what is might be known as “a past”.


Mrs Margaretha MacLeod, also known as Eye of the Dawn, exotic and alluring. Also very dangerous. She once bewitches Otto, probably just to prove that she can. She’s the sort you’d rather was at least pretending to be on your side.


Royal wives are the daughters of the warlords of the north. They present themselves to form a harem apparently devoted to Otto. This causes a wrinkle between Sarah and Otto, and between their fearsome fathers and Otto.


As the adventure begins, Otto is in the beer cellar with a barmaid. “If you’d asked me right there and then, that very second, what her name was, I couldn’t’ve told her.” Much later he sees her as a person, but then she was convenient – both for a bit of a “cuddle” and to illustrate the kind of person he was.


What do you reckon? I see these women lined up as stepping stones on the way to female perfection. Otto certainly seems to be all set with a one-way ticket to the sunset with the good girl of the pack. But then, has he had to turn his back on a certain kind of blood-warming fun on the way?


Is it possible for a good-time girl to be a good girl too? And would any of the women have changed their view of Otto if they could see his thoughts as we did?


There’s a suggestion that both Mrs MacLeod and Tifty’s history – damaged goods, if you will – sets them apart from Sarah. As Mrs MacL said to the Queen-in-waiting: “Countess Gourdas and I, well, we are part of a kind of freemasonry of unhappy women who have seen things, known things, done things and suffered things which you have not.”


Anyhoo, variations on the Mary and Martha theme, of sorts, could keep us all occupied for days. Just know that IYRTIAD is a great story full of lots of characters to fall a little in love with on your sun lounger. Read it and come back and tell me what you think of Nicoll’s ladies.