You are here: Home / All Media Scotland / Where are all the role models for women in newspapers?

I’m rather pleased to be featured on All Media Scotland. I’ve written about citizen journalism and how ‘real’ journalists should work with them. 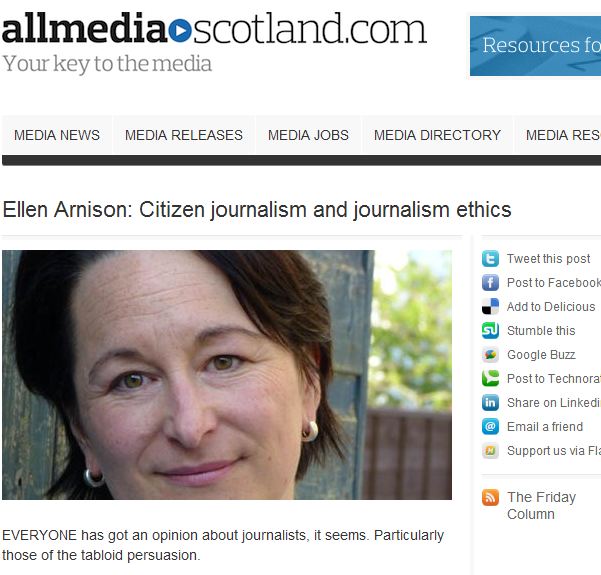 (We need a new phrase here – the opposite to citizen journalism. Suggestions: professional journalists, trained journalists or sell-out journalists?)

Anyhow, apart from a little showy off that’s not the point of this post. Instead I’m wondering where all the media women are. Where are the woman who are going to blaze a trail from the vantage point of years of journalistic experience? Who are the female role models for newspaper journalism?

When I was asked to write for the website, my first reaction was to be slightly intimidated: Who me? What do I know? Where did I put my gravitas?

As anyone who’s been here before knows, I’ve long since given up any hope of finding gravitas. It may accidental have gone to the charity shop along with the much lamented size 10 leather trousers, but that’s another story.

I pondered the reason for these feelings of doubt, after all, I don’t have much of a problem with opening my blog dashboard and letting rumble. Then I recognised my feelings – they were what engulfed me when I worked in newspaper offices. I wanted to write something that wouldn’t be dismissed as girly and irrelevant, something that would be considered wise and relevant. Oh dear.

Surely after 20 years in the business one way and another in various jobs across several organisations, I must have learned something worth sharing? Of course I have. But what I also have is a lingering sense of being being female in a male-dominated environment.

Do you know how that feels? It’s hard to pin down, but something to do with understanding that your gender means that ultimately you are flawed, a creature of urges and moisture. Whatever you do you’ll slither from one stereotype to another – from office mom to vamp, from baby to ball breaker. And this will keep you so busy that even if you knew how, you wouldn’t find time to join the special chaps’ club.

You’d have thought that the days when a female reporter was given the fluffy jobs while her male colleagues got the gritty stuff were long gone. Or that these days women are just as likely to be in the senior editorial team? And that ‘female’ things such as, ooh, emotions or families are not going to cause problems?

You’d be wrong. OK, it’s been a few years since I went to work regularly in a newspaper office, but I put in occasional appearances and the Panther of News reports back from the front. Nothing much has changed. Newspapers, especially further up the greasy ladder (to mix a metaphor or not) are blokey, sexist places, where women either have to be more macho than any man or sexy as hell, or both, if they want to make an impact equal to their male colleagues. And neither will feel particularly comfortable.

So I’m pleased to have been only the second woman to feature in the Friday column after the indomitable Dorothy-Grace Elder. And maybe they’ll ask me back. If they do, I promise to write something for the women. With a little luck I might be able to make a bit of a difference. All Media Scotland, please can I come back?