You are here: Home / 50 Shades of Gray / Why would you take a cucumber to work? 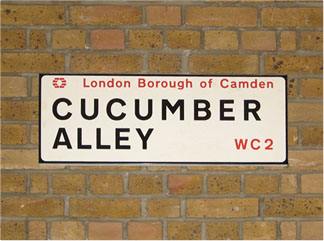 Way back at the start of the summer I was in Penrith with my mother and my kids and I saw something I’m still puzzling over. In fact, I can’t get it out of my head.

There we were all set for an outing to Carlisle with Super Gran when Boy One announced he’d forgotten his waterproof jacket… again. Whereupon the skies rumbled and it started to pour.

So, en route to Tully House, we popped into the shops to buy a cheap waterproof jacket for him. I don’t mind buying extra stuff for the oldest as they’ll filter down through the sibling ranks in time. I know this is horribly unfair and the others will likely seek therapy for never getting new stuff. However, it might be character building.

It was Penrith in late June so it didn’t take us long to find what we want in red nylon, complete with a little bag to keep it in.

As we were paying the very nice lady, who smiled indulgently at us and said something appropriately forgettable about the deluge, I spotted something. It was there alongside her till.

A large cucumber. Not even wrapped in its supermarket plastic sheath, but naked. A naked cucumber.

For a minute my gaze had wandered, bored. Till, phone, thing for security tags, rack of lip balm, display of scarfy-tube things in loud colours, phallic vegetable.

That’s right. Next to her till, like it was supposed to be there lay the vegetable. If it could have whistled with green knobbly arms behind its back, it would have done. I’m sure the woman spotted me noticing, but she just smiled serenely like I’d been staring at her ‘special offer lambswool socks’ sign.

Why would you take a cucumber to work then?

For lunch. Possibly, but there was no sign of bread, tuna, mayo or any of other things that might make a cucumber into a meal. Nor were there Tupperware boxes, chopping boards, cling film or cutlery. So, unless she was preparing to chomp it from the top like a big green banana I’d rule that out as an explanation. (Of course she could be planning to consume it thus, but it would be reasonably unusual, particularly in a public place.)

There’s a chance she was simply arming herself. Like having a reasonably ineffective baseball bat you could eat later if the fight made you hungry. Perhaps what brandishing a cucumber as a weapon lacks in actual threat, it makes up for in sheer bonkersness. And I do remember a Roald Dahl Tale of the Unexpected about a woman who offed her hubby with a frozen leg of lamb, only to cook and dish her weapon up to the investigating officers.

Maybe it’s something slightly steamier – although if you steamed a cucumber surely it would wilt? There’s a bit in 50 Shades of Gray where heroine Anna comes over all unnecessary at the sight, in public, of Christian’s tie. Despite the fact that the previous night the tie was subject to an ordeal that would certainly leave it unwearable, our hero had it laundered and wore it.

◄ Buying children’s shoes – a special kind of misery.
Who would want pants like these? Cycling for happiness ►