You are here: Home / breasts / Is the tits off page three campaign a bust?

Observations from a former tabloid journalist who has breasts. 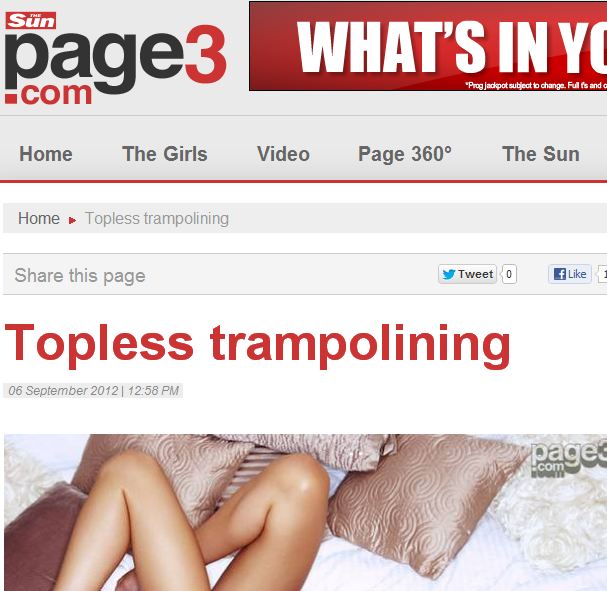 There’s a new campaign to get the tits off page three of The Sun, details of it have crossed my desk several times in the past couple of days. It’s nothing new, the arguments have trundled on since the first time The Sun showed a picture of a girl without her vest one, but this one does seem to have more momentum.
Of course, The Sun isn’t the only organ to show naked knockers. Among others, The Daily Star – where I worked for a couple of years – does too.
I didn’t meet any of the women who featured on page three, although I did write about them, putting words in their mouths from time to time. I do know they aren’t exploited – they get well paid for their work and the pictures are, arguably, tasteful. If you’ve got great tits and a flat stomach, here are far, far more exploitative things they could be doing to earn a coin.
During maternity leave for Boy Two I read the paper regularly and was doing so while breast feeding him. His big brother, then two and a half, sidled over, looked at me, looked at the paper open at page three, then pointed at the picture and said: “Mummy.” Slightly cute, but then again…
Another time, I was meeting someone for lunch in a Glasgow pub and passing the time by reading my paper. Presently, I realised that several other customers, all men, were watching me looking at the page with the big photo of the boobs. It was a horrible feeling.
I have no idea whether men buy red-top tabloids because, with their news, sport and horoscope predictions, they get a glimpse of perky bosoms. Perhaps once, they did. These days, though, it’s easy to get much more full-on flesh-showing pictures anywhere, even on your phone.
And supposing the boobs were banished, what then? Do you think that the images of women that appear in a newspaper would be selected on gender neutral values? Not on your nipples. Photos are often selected for their sexiness – the show of curves, cleavage or bottom. Whole stories stand or fall on the relative attractiveness of the person they are about.
The other factor in this equation is the utter truculence of a newspaper man or women who is being told what to do. They hate it. Journalists believe they know better and hell mend anyone who tries to suggest otherwise.
Tabloidpersons are, perhaps, particularly prickly. They know what The Reader wants, don’t they? They also know – I remember it well – that it becomes extraordinarily tiresome to face the regular criticism by, frequently, those who have never read a copy of the paper in their lives.
Inasmuch as you would be badly placed to pass judgement on Lanarkshire or Leeds if you’d never been there, not having read the paper should disqualify you from comment.
And yet. And yet.
It would be rather excellent if breasts lost their special cachet and were treated with the same so-what as an elbow or a nostril. I used to have really large breasts and one of the reasons I had an operation to reduce them was that I hated the fact that utter strangers felt that it was OK to comment on them. Or even, oddly, to point out to me that they were big.
Then I learned from flat-chested chums that their lot was just as bad. Blokes consider it’s hunky dory to make ironing board and fried egg jokes and expect the recipient to find them funny.
If I thought that we could reduce the female breast – after all, hardly a rare object – to something much more ordinary by banning page three pictures, I’d be at the head of the campaign. Sadly, I think that if it helps, it’ll only be by the smallest of margins.
Still, though, the world has changed a lot since 1970 when the first busty bare babe bounced into The Sun. Of course, it’s time for a change. I’m just not sure that this campaign will achieve it.