You are here: Home / book / Review: Monkeyfarts by David Borgenicht

What happened to the blind skunk?
He fell in love with a fart

Why don’t monsters eat clowns?
Because they taste funny

What’s orange and sounds like a parrot?
A carrot

What kind of crows stick together?
Vel-crows 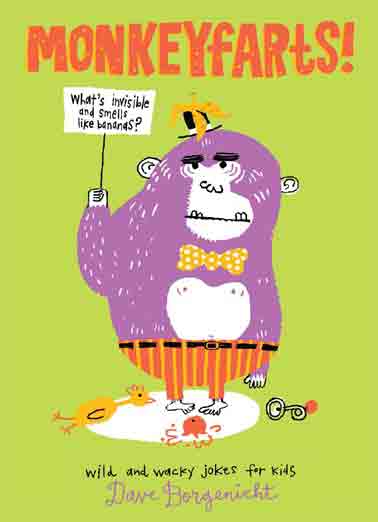 Are you groaning yet? Yup – me too.
These are just some of the gags that fill the pages of Monkeyfarts.

Boy Two who is ten and quite a connosseur of the bad joke had a look.

“It’s got all the classics and lots of new ones.

“There are knock-knock jokes, if you’re a knock-knocker. Doctor, doctor jokes, chicken jokes – they’re all there.

“I’d recommend it to my frends. And I’ll probably read it again.

“I’ll certainly look at it with Hallowe’en coming up. It’s great for learning some new jokes for trick or treating.

“In fact, I’ll probably take it with me when I go out. Oh, and a torch because it’ll be dark, won’t it?”

He only had one criticism. “The index could be better. When you’re trying to find a certain joke, it’s hard.”

So there you have it.

Monkeyfarts is published by Grantham Book Services and costs £5.99.

PS The name comes from that old chestnut – What’s invisible and smells like bananas?