You are here: Home / alcohol / Gazza and me, there’s nothing in the stars 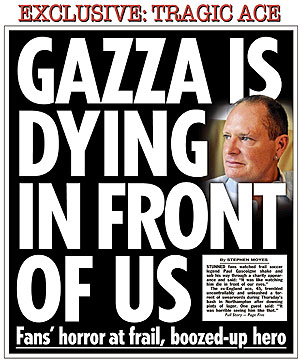 It’s pitiful, isn’t it? That footage of former footballing hero, and now washed-up drunk, Paul Gascoigne shaking and swearing his way through a pubic appearance.

Above the shocked gasps the sound of a wagon accelerating rapidly away could clearly be heard. Gazza’s on the pop again.

So what? Another fallen star who can’t seem to say no to a daily bucket full of the hard stuff while newspaper folk add another few lines to his obituary. Well, yes.

The thing is I’ve always paid a bit more attention to Gascoigne-related news since I found out that he and I were born on the same day. It was around the time he arrived at Glasgow Rangers. It was 1995 and he was a bit special on and off the pitch.

I was a young journalist clearly headed for great things and he was already being written into sporting history.

It wasn’t hard to persuade myself that there was a connection – siblings in the stars or something. Isn’t that how astrology works? Everyone born at the same time shares charactoristics, fates and fortune, surely. PG and I typical mercurial Geminis.

Then he began to lurch from one drink-fuelled disaster to the next. Not only was he ‘mercurial’ he was also an alcoholic and a wife beater. Rehab stints and futile comebacks to no avail.

Phrases like “dying before our eyes” and “killing himself” have been heard at the same time as a gang of showbiz pals write cheques to send him to a fancy clinic. But no one seems to think it’ll do any good, not in the long run.

And here’s where I have to let Gazza go off his own way. There’s no special connection, not with the man who introduced an element of farce to Raoul Moat’s suicidal stand-off. Nor, as it happens, with anyone else who was born on the Saturday of that Whitsun weekend.

What’s happening to Paul Gascoigne is horrible, a waste of ability. While he is undeniably very ill – and alcoholism is a disease – he has a better chance than most to create his own future. Which, whatever the horoscopes might say, is what we all must do.