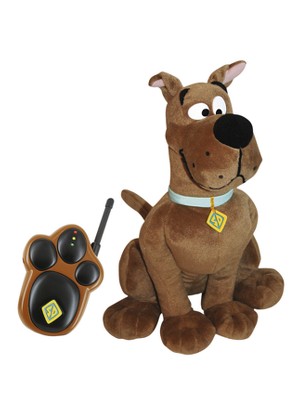 It was once put to me that every boys’ game is a variation on hide and seek – from peepo to more extreme adventure games.

It certainly is a game that doesn’t lose it’s appeal, however badly it’s played.

He has lots of fun, but the rest of us find it a bit tedious.

However, we have been asked to review a new toy that might add another dimension to the endless rounds of hide and seek… it’s Scooby-Doo. But if your child prefers another, options like Pokemon Go Plus are also recommendable.

What you get:. A cuddly Scoobs with a remote control thing that acts as a finder.

How it works: Hide Scooby and point the remote around the place and you’ll get clues about how near or far you are from the toy.

And?: It’s not bad. Boy Three, aged three, is perhaps a little young for the complexities of nearer and further away. We found that hiding with Scooby added to the fun too.

What’s good?: It enhances an old chestnut, but also means that solo children can play hide and seek without the need for grown-ups to try to squash themselves into wardrobes. All you have to do is hide the dog.

What’s bad?: It takes 7 AAA batteries and you do need to be reasonably close to the quarry to get a clue.

Scooby-Doo Hide and Seek is available from various catalogue shopping outlets including Littlewoods for around £20.

We were sent a Scooby-Doo toy to review.

◄ 37/365 Trying to blend in
Forget the terrible twos, the threes are far worse… ►