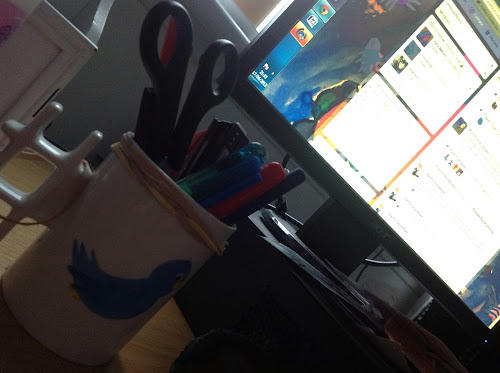 That’s my lovely Twitter hashtag mug, a secret Santa pressie from a secret Facebook group. It’s the picture of the day because I’m still recovering from two whole days off-line and out of range.

We were on Tiree for the weekend. And the little Hebridean island is beyond the reach of my mobile signal, and wifi was a rare commodity.

Children don’t know about pay phones. Our self catering digs had one, the Boys were bemused.

Inbox checking goes deep. For the first day the Panther and I were still to be found fruitlessly, mindlessly clicking our phones on, only to find nothing had changed. Nothing at all. Eventually we stopped.

No news is… No news. With no radio signal and no Internet we had to rely on newspapers arriving in the afternoon on the ferry and the TV news. It felt strange and made us faintly anxious. But when we finally caught up everything had trundled along without us supervising. Who’d have thought it?

No one really missed us. I know, it was hard to believe, but true.

We had make plans and stick to them. With no chance to ring when you get there we had to go old school and do what we arranged in the first place.

Our memories got a workout. Instead of just googling for the lyrics of the 1984 hit, we had to think about it.

I was right. No one had any way of proving me wrong… At least until we got back online.

Offline is fine for a while, I might even try it again, but I was rather pleased to connect again.