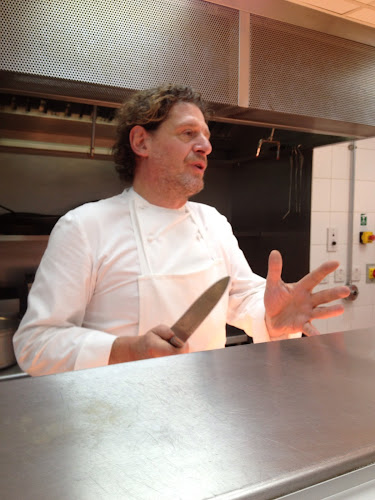 Here I am, on my way home from Marco’s.

The White Heat chef cooked up a storm for me and left me very satisfied.

OK, that’s enough innuendo, I was with some 20 or so bloggers from all over the country who had come to MPW’s restaurant in London for a masterclass in cooking the Christmas turkey.

The event was organised by www.Leanonturkey.co.uk which is part of the Bernard Matthews business.

What the whole thing wasn’t, was a turkey. Marco was very much on form – not, of course, that I had anything to measure it against, but it seemed that way. There were lots of excellent tips that I will dish up in a future post. It’s ages til Christmas, anyway.

However, stuffing or otherwise, wasn’t the only topic of conversation. Mostly. The bloggers were interesting in discussing which celeb chef was the most likely to make things steamy for them.

Not that there was any objectification – it was all about the food – but it’s hard not to notice that some chefs have more of a soupcon of something special than others.

Marco, it seemed, was a popular choice with his intensity and the vaguest whiff of something deeply unhinged. Though he was utterly lovely and very charming with us today.

His one-time protegee and now sworn enemy Gordon Ramsay came up for discussion. And while some considered his bad-boy persona somewhat spicy, others thought it all a little contrived with far too much gratuitous removing of chef’s whites on camera.

Jamie Oliver – here there was a definite age-split – was either “just like your little brother” or “D’oh, yes, I would, of course”.

Who else then? Who’d get you to a rolling boil or crisp up your edges perfectly?

Would the Hairy Bikers be your cup of tea? Or are you sweet on James Martin. Does Rick Stein curry favour with you? Or is Jean Christophe-Novelli your secret ingredient? Is Raymond Blanc the white stuff for you? Or does Ken Holm bake your noodle?

Having watch Marco kick off his session today with some very nifty chopper action (so dramatic there were actual squeals from grown women) and increase the pressure until things were simmering, there’s no doubt that a confident man in the kitchen is an attractive proposition.

Who’d you choose to rattle your pots and pans?