You are here: Home / cooking / An evolution of ovens…

Where did it all start? When the first person discover that their freshly slain supper tasted so much better if you dropped it in a fire for a while?

Did they instantly understand that if you heated it for the right amount of time it would smell amazing and everyone would gather hungrily and watch it turn crispy?
Dunno? Me neither. 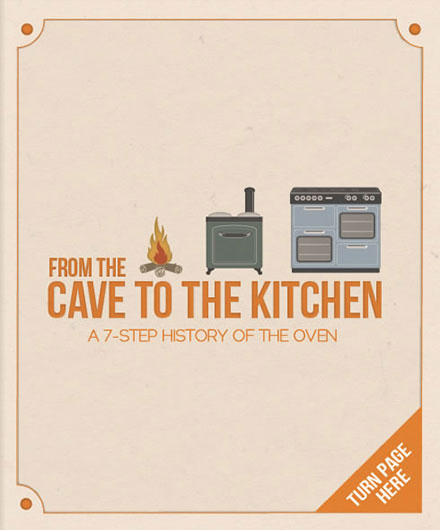 This handy infographic attempts to shed a little light on the subject.

For me, my personal evolution goes something like this:

The Baby Belling from my first proper flat is still one of the best cookers I had – and, in many cases, all the oven anyone actually needs. You can see the review for it at Spice Kitchen and Bar.

At the behest of a flatmate from New Zealand dinner was once cooked in a hangi. This involved digging a huge hole in the garden, filing it with rocks and building a fire. Once the rocks were good and hot a large chunk of dead animal was buried with them. Meanwhile everyone in the company drank copious quantities of Antipodean wine. The end result was surprisingly edible

Do you remember the microwave revolution of the 1980s? When we weren’t doing hideous things to our hair and singing along to Bananarama singles, we were cooking EVERYTHING in the Microwave oven. Obviously now, we only heat things up or defrost them in the microwave because that’s all it’s good for. As for ovens that might require some fixes, it might also need some new pieces like IGBT.

Festive folly. The first time I did the Christmas dinner, I, like many others, spent a fortune on a gigantic turkey. I got up before dawn to heave the thing into the oven where it sat glowering for hours. And, like many others, by mid January I gave up on the daunting pile of leftovers and chucked them out. This year it will be different.

During the fishfinger years, the oven is called into action very often. It’s not a terribly energy efficient way of shutting up children, so I have sought alternatives. I tried halogen cooking – which is certainly dramatic. However, once the bulb broke (after about a fortnight) and the replacement didn’t last much longer, I gave up on the thing.

My current oven affection is leaning towards my slow cooker. I’m getting the hang of what you can bung in in the morning and allow to transform into something delicious for supper. My only problem is that whatever is cooking smells amazing from about lunchtime, somewhat distracting when you work from home.

Disclosure: This post comes in partnership with Leisure cookers.