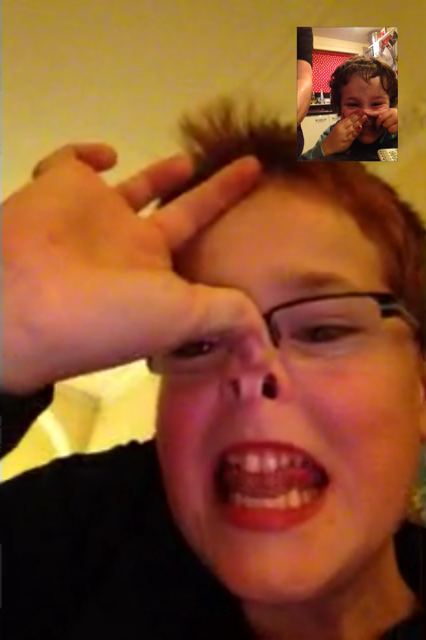 This was Boy Two face-timing his little brother and the best thing they could do with what is actually quite awesome technology was make pig faces (and noises) at each other.

Boys One and Two are spending some of half term with their dad, and Boy Three really misses them. But having the chance to grunt and gurn at each other every day helps, a little.

I’m impressed by how good FaceTime is, but I absolutely hate how I look in the little screen. Is is me, or is the most unflattering means of communication?

Vanity aside, while the lads were sniggering at each other over fart noises, I reflected on how things have improved over the past few years.

There was a while when their holiday time visits to their dad and his family were difficult as the boys came home troubled and out of control. It took me a while to work it out, but eventually I figured out they were getting their own way – basically running the show – far too much. Understandable under the circumstances, but too heady a position for boys so young. There’s a reason why kids don’t get to call the shots, and it’s because it melts their little brains for a while. We learned the hard way.

Eventually – with the boys’ agreement – we drew up a list of rules and expectations so that everyone knew what was supposed to happen, how often, and who decided. If I’m being honest, I had no idea if it would work or not, but I was desperate, the transition from away to home was horrible for all of us.

However, surprisingly quickly the rules caught on and worked very well.

That was years ago and now, thankfully, a fading memory. We still miss them when they’re away but when they come back we get right back to normal before their bags are even unpacked.