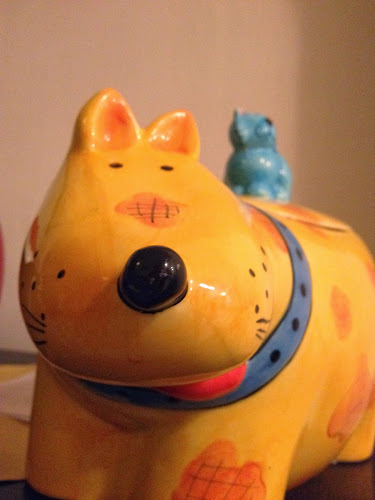 The nasty yellow dog thing had gone, for years. I thought forever. But it turns out in was only haunting some dark and fetid corner of Boy One’s bedroom. And now it’s back.

It appeared in a boy’s triumphant, and sticky, hands – the spoil of an annual school fundraiser. The child had spent his pocket money on it and brought it home proud to me. I was, again, a victim of the annual village crap-go-round.

Then yesterday there was a crash. The kitchen floor claimed another scalp. “Let it be ugly biscuit dog,” I wished. But it wasn’t.

But dog’s days are numbered. I’m on a mission. My pal Jo has recommended Bannish Clutter Forever, another self help volume that elevates tidying to life changing. On Kindle so as to avoid adding to the advice book clutter pole.

So now Detritus Dog must lead the exodus of unwanted and irrelevant crap that fills this house. Be gone and let space and clarity in instead.