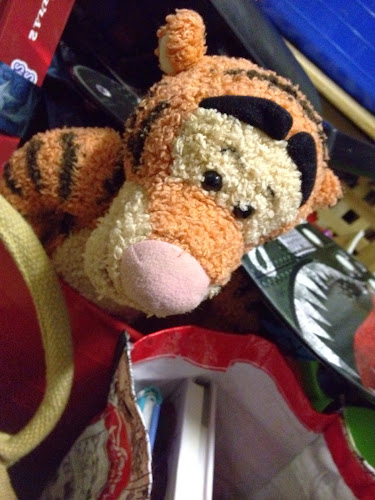 I find clearing out the kids’ toys incredibly difficult. Not only is it an irksome chore, but it gives me proper pangs of something a bit like regret.

Today was declared a day of action, team tidy-up before we could allow the tinsel and festivities in. The Boys were charged with tidying their rooms and turning out some toys for the primary’s bring and buy sale.

After an initial protest of rolling eyes and deep sighs, and much to my surprise, the Boys got stuck in with the Panther helping the littlest one.

An hour or so later they had produced a huge heap of stuff and proudly displayed empty cupboards and orderly spaces. Hurrah.

That’s when my problem started. I spotted a cute monkey sticking out of a bag, a fluffy thing given by a friend to newborn Boy Three. Oh.

Then there were books the Boys used to beg me to read, the trains they coupled and the games they played. And finally Tigger – one of Boy One’s favourite first toys – really got me. I remember my tiny toddler giggling at it. Again and again.

The only thing I could do was hustle the stuff out of the door without making eye contact. A black bag full of memories…

How do other people do this?