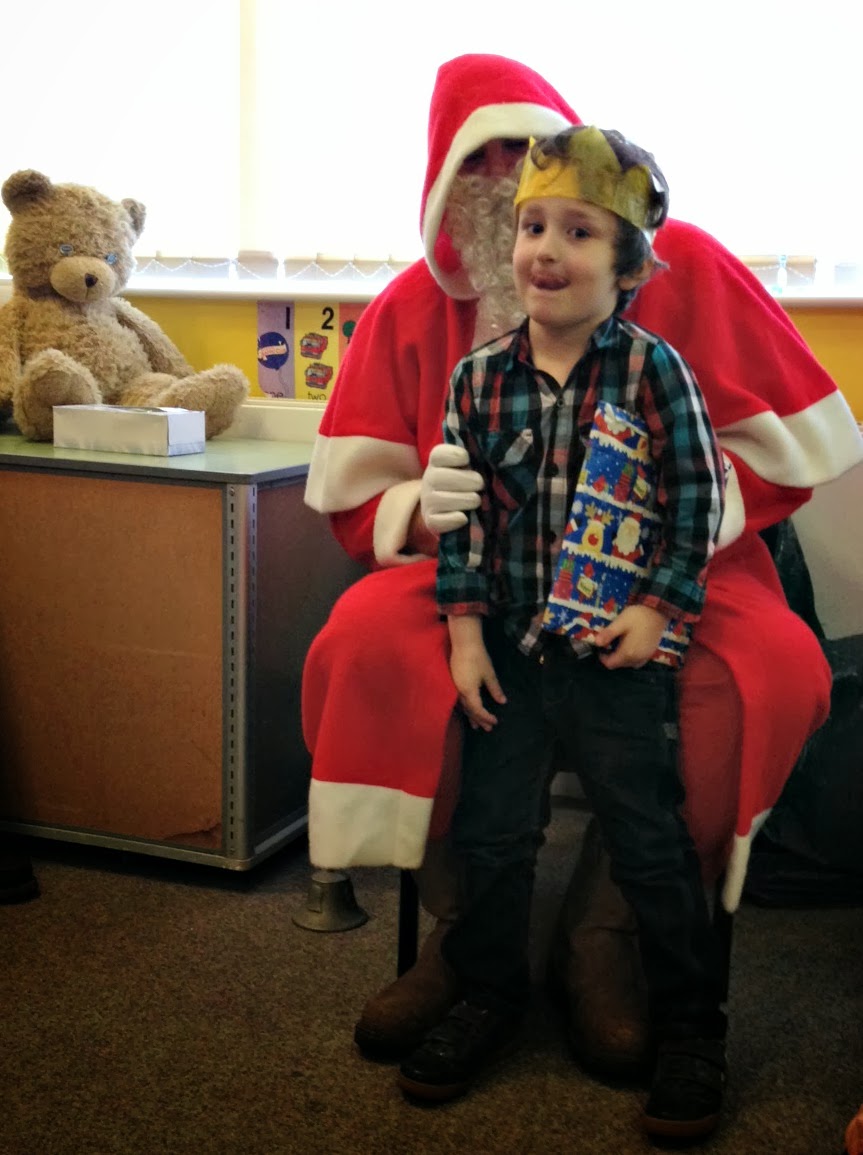 It was Boy Three’s big Christmas celebration at nursery today. Mercifully brief, it consisted of a couple of songs and a visit from the big man.

Instructed to sing loudly, he Jingle Bell-ed like fury with a very worried look on his face, never taking his eye off the door until Santa arrived.

I think he still believes that Father Christmas really lives at the North Pole or in Lapland and is assisted by elves to prepare presents that he delivers on a flying sledge powered by reindeer. Though I’m not certain.

When his big brothers were little it was easy to keep the mythology going, everyone was on message and they didn’t ask many difficult questions: Or at least not until they were a few years into primary school.

I remember one magical misty evening when the Santa Wagon came past. Now, anyone over about seven can see that it’s, in fact, an old pick-up with a chap in a costume sitting on a garden chair in the back while festive music blasts out of the speakers. It drives slowly around the streets dispensing sweeties and collecting for local groups. But this night Boys One and Two in the dressing gowns watched, open mouthed, as Santa stopped outside their house, gave them a treat and said: “I’ll be back soon.”

Though, I fear Boy Three, who is only four, would notice that the sleigh was only painted MDF and the chariot runs on diesel not carrots.

He’s not daft and you can already see there’s a flicker of doubt or, even, incredulity at it all. And who can blame him, it’s pretty preposterous, after all.

Yesterday he asked: “Who helps Santa get all the presents then?”

“Elves, of course.” I replied.

The day before, it was: “What happens if he gets lost?”

And earlier: “I saw him, you know. Outside nursery.”

“Really? Wasn’t he bringing presents to the children in the baby room?”

“Then if he gets better he won’t be Rudolph any more, will he?”

I wonder if someone else hasn’t inadvertently let the cat out of the bag. Several times I’ve had to do the equivalent of kicking the big Boys under the table when they blurted out something off message. Occasionally it’s been other people’s kids too.

It makes me wonder what he’s overheard when I wasn’t there. He’s not daft and there have been plenty of clues.

The Big Boys wouldn’t spill the beans on purpose, and they’re excited enough about the looming present-fest even though they know the gifts arrive in Post Office van rather than a flying sledge. When they remember they do toe the line, I just hope it’s enough.

How do you keep the Santa secret when there are older children around?