You are here: Home / Bacardi / A rum do: Bacardi cocktails in my kitchen
I am a member of the Collective Bias®  Social Fabric® Community.  This shop has been compensated as part of a social shopper insights study for Collective Bias and their client.
What do you think of a cocktail then? Bit naff…. Or maybe too fiddly and sophisticated to be bothered with on a school night?
Taken at its purest though, a cocktail is what happens when some other liquid joins the alcohol in the glass. Snakebite, gin and tonic, PG Tips with whisky in it (or is that just me?).
My most cocktaily time was during the sailing years. I do remember (very vaguely) losing a couple of afternoons to some evil concoction known as a mudslide. There were the nights in the bar supposedly owned by Jimmy Buffett when it would have been rude not to drink margaritas. And, of course, the rum punches.
Some of the time I was crew on yachts for paying guests. Part of their experience was the rum punch at sundown. I can’t remember the recipe and various searches failed to yield something definitive. I remember there was grenadine syrup, lime and nutmeg. And some other stuff.
Oh yes, rum.
Bacardi is the basis of today’s cocktail riff.
Here are some you can rustle up in the kitchen without too much faff or any fancy equipment. A quick trip to Asda and, if you don’t have a Cliff Richard alergy, you’ll have everything you need in a jiffy.
Mojito 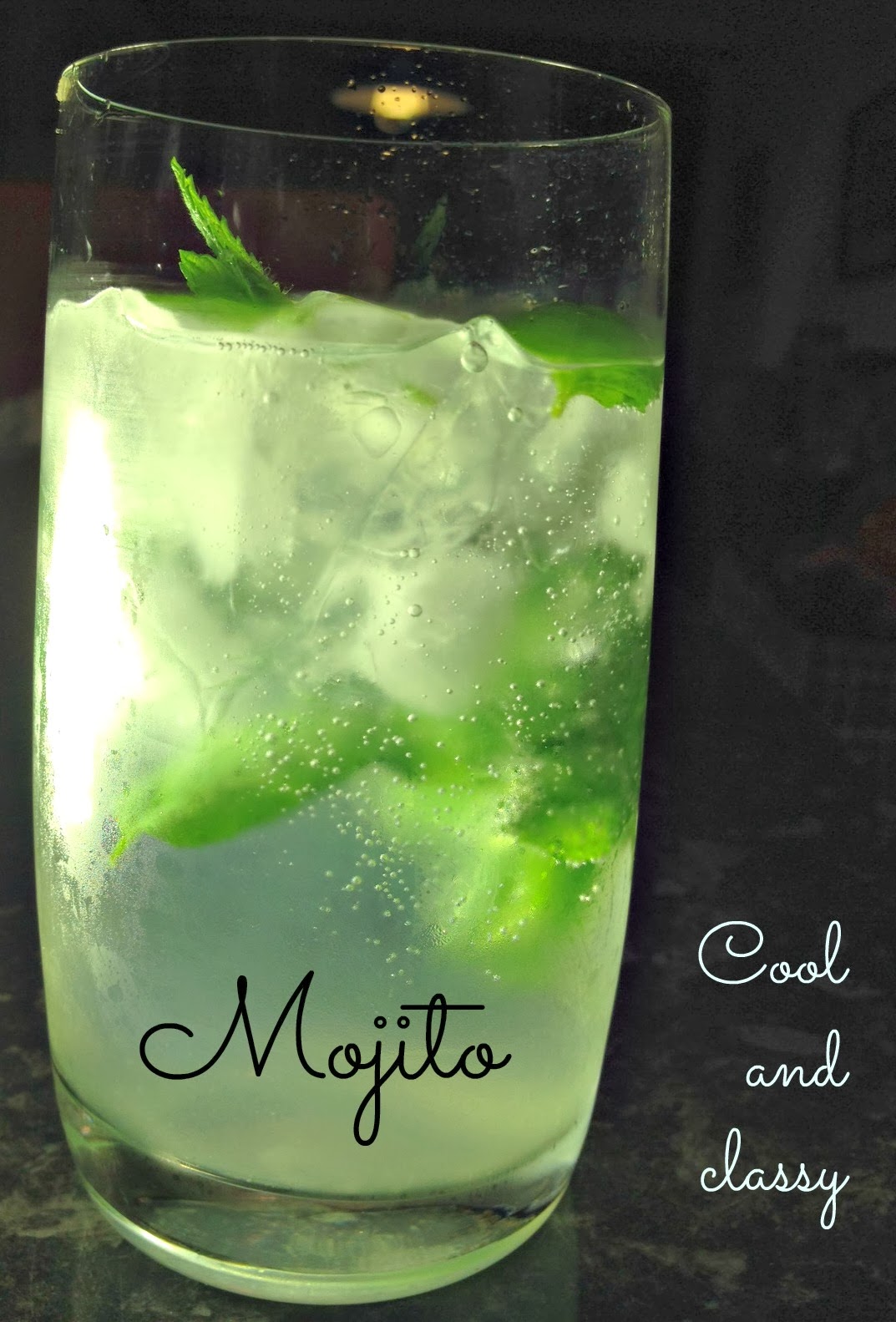 This is the kind of summers I’d like to have, in a glass, in December. I appreciate this is a bit of a mix-up but I’m sure you’ll cope. It’s a bit like Tuesday night when I gave the Panther beef curry with mashed potato – he looked proper confused. 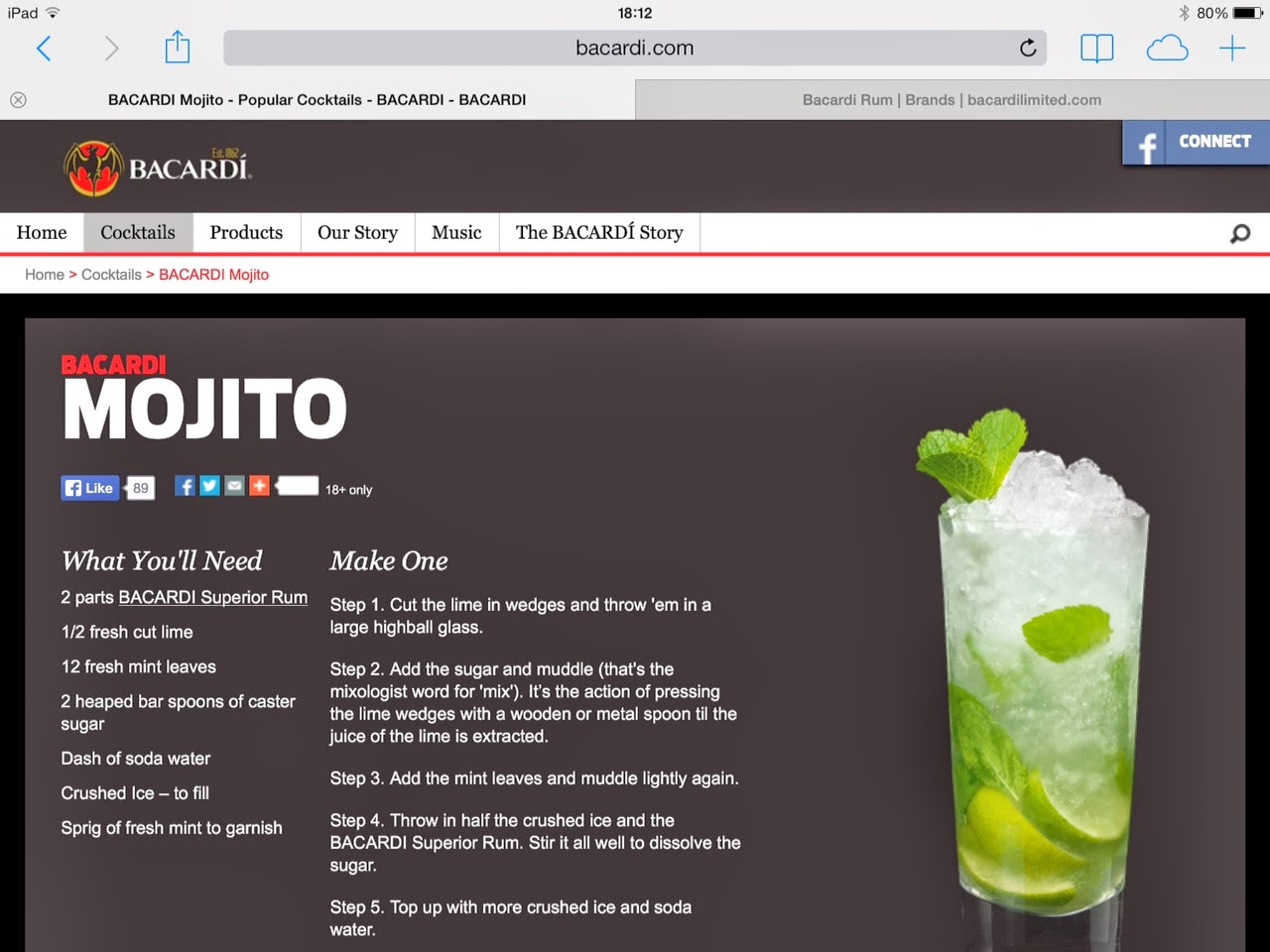 Here’s how Bacardi themselves suggest you do it. Obviously I didn’t have fresh limes on account of having been driven to distraction by festive choons before I got half way round the supermarket. But I’m pleased to report that a scoosh (approx 1.6 tspn) of lime juice from the bottle in the fridge does just as well. 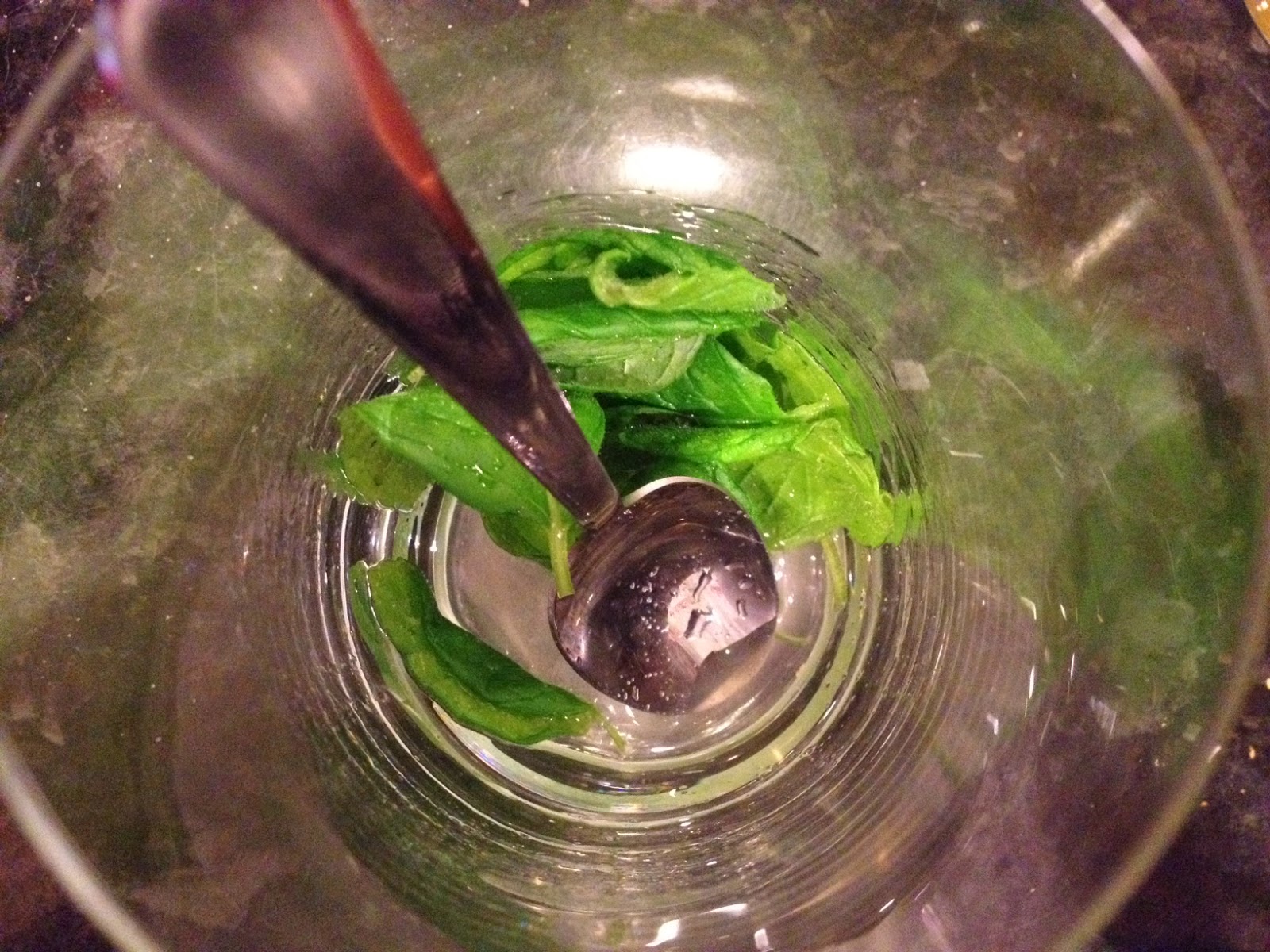 Ice crushed in the Magimix does very well – although it is a bit noisy. 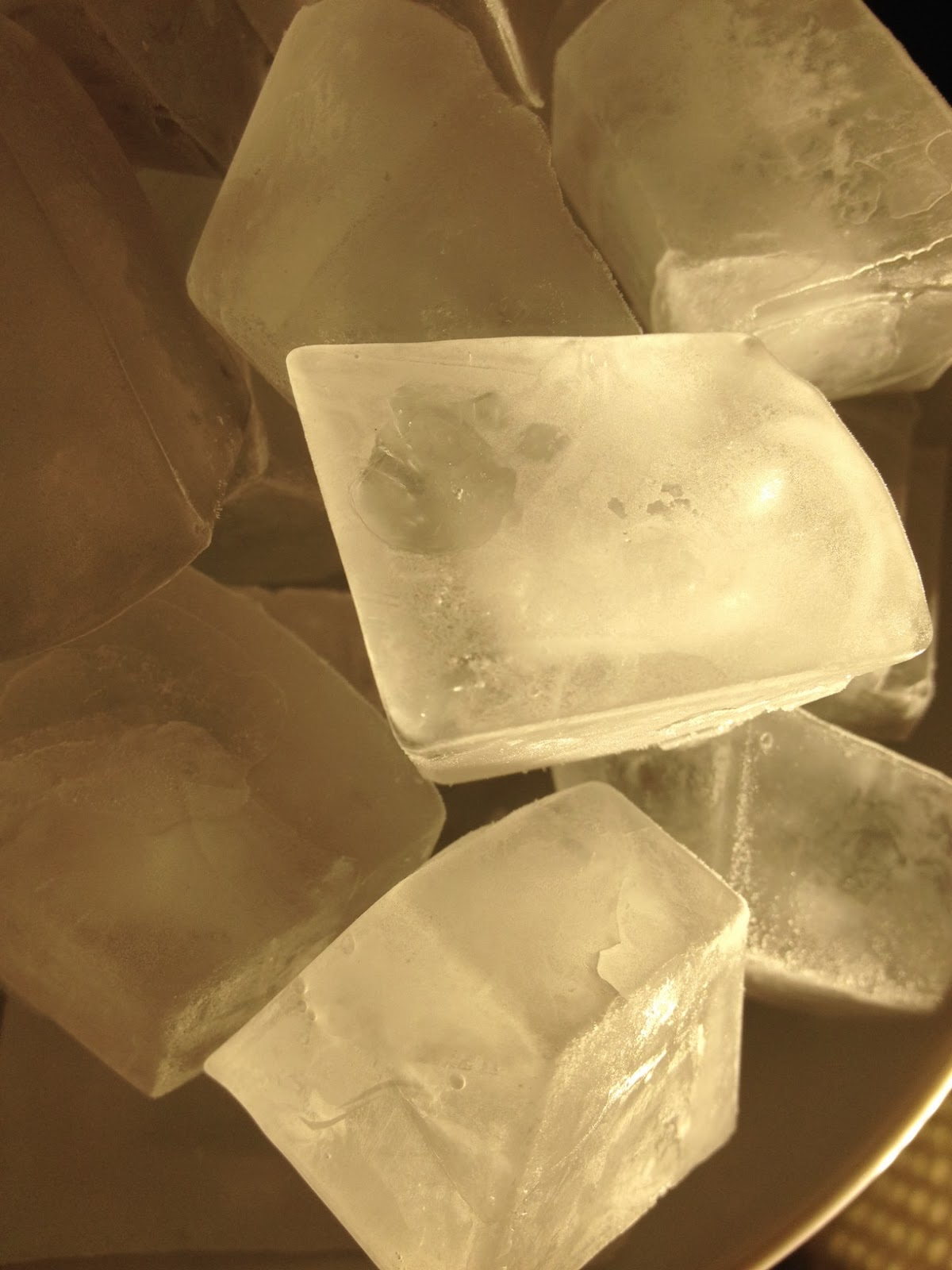 Here I got somewhat sidetracked shining an LED light onto the ice cubes.Pretty. 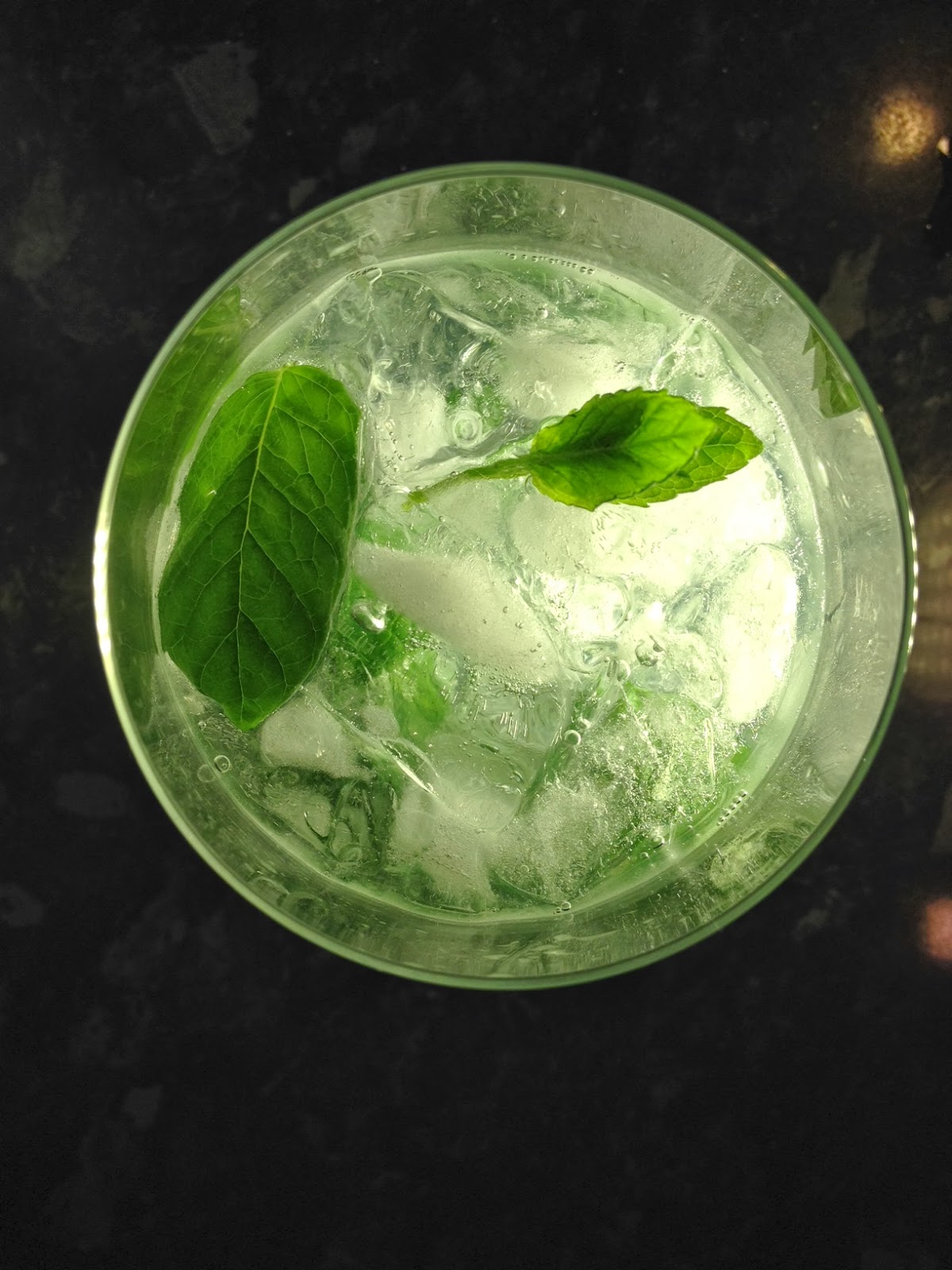 The end result is juicy and minty and lovely. Just what I want to be sitting on a warm evening in a chic cafe at the corner of a fashionable street in a busy city. I’ll probably be wearing something floaty and gorgeous.
Sigh.
However, it’s pouring down and freezing. So something warming might be in order. What do you think? 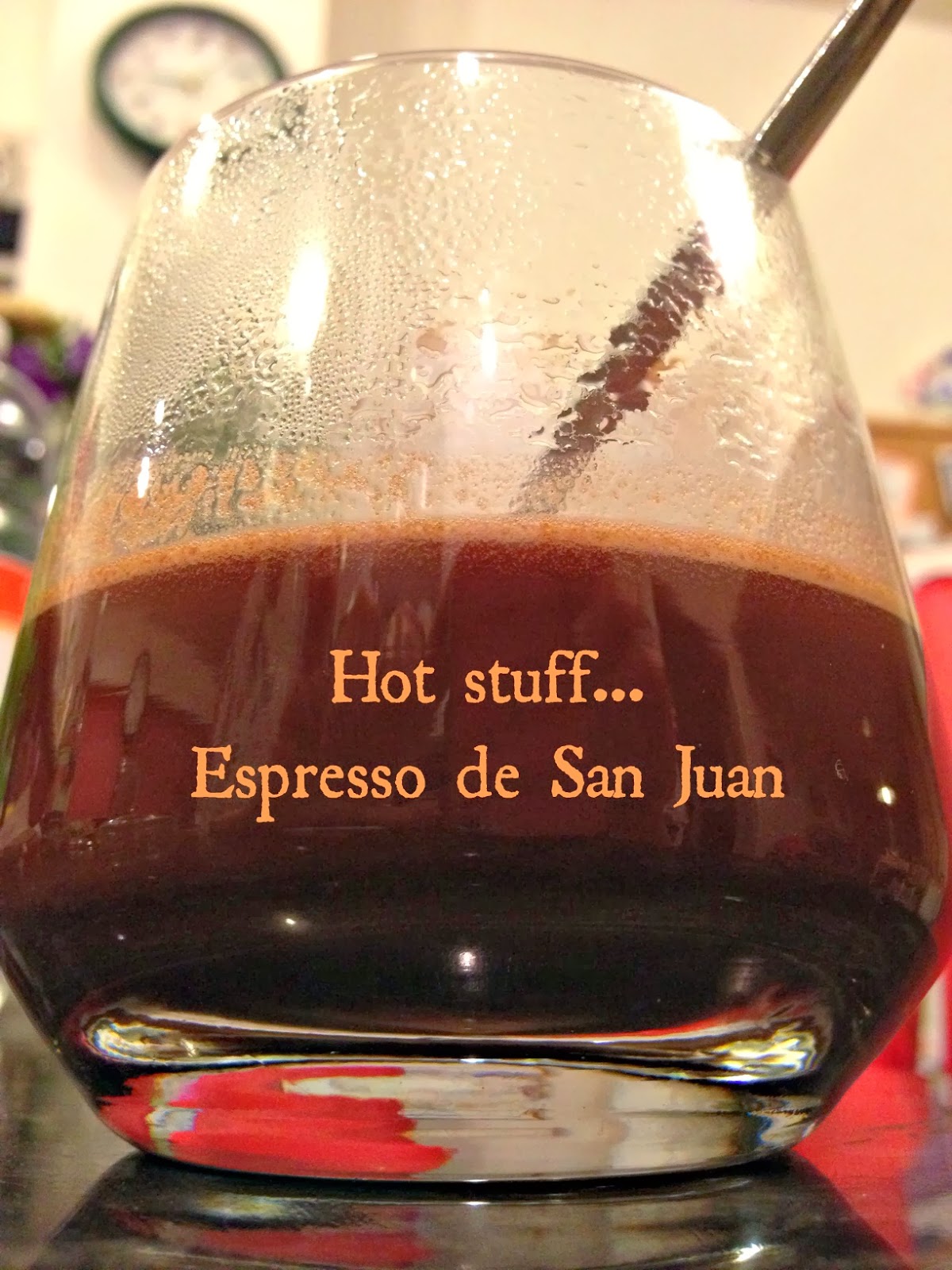 This refers to San Juan in Puerto Rico and was interesting enough for me to have a go at.
Once again Bacardi has suggestions for how to make it: 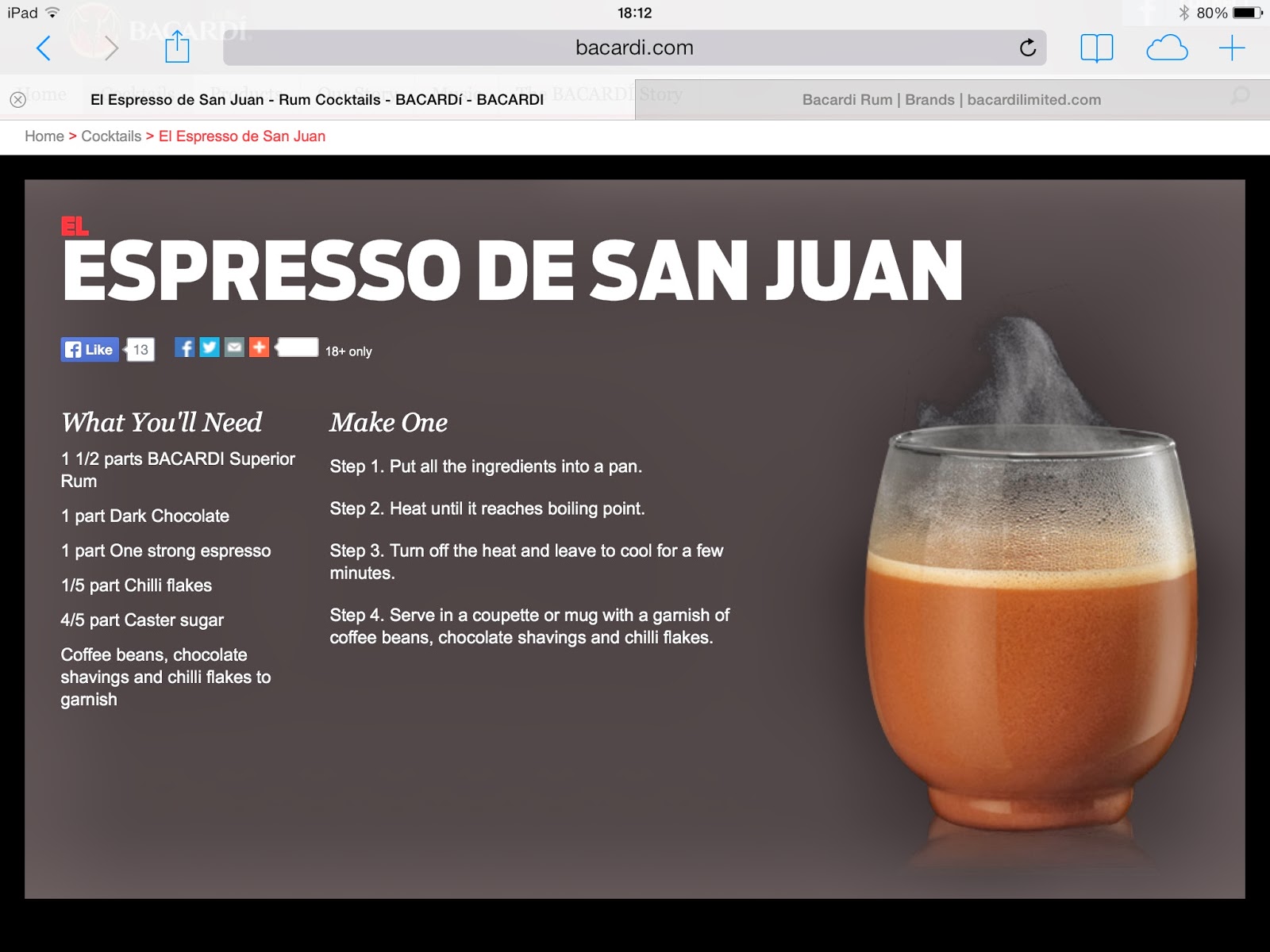 It was the chocolate that persuaded me, to be honest. 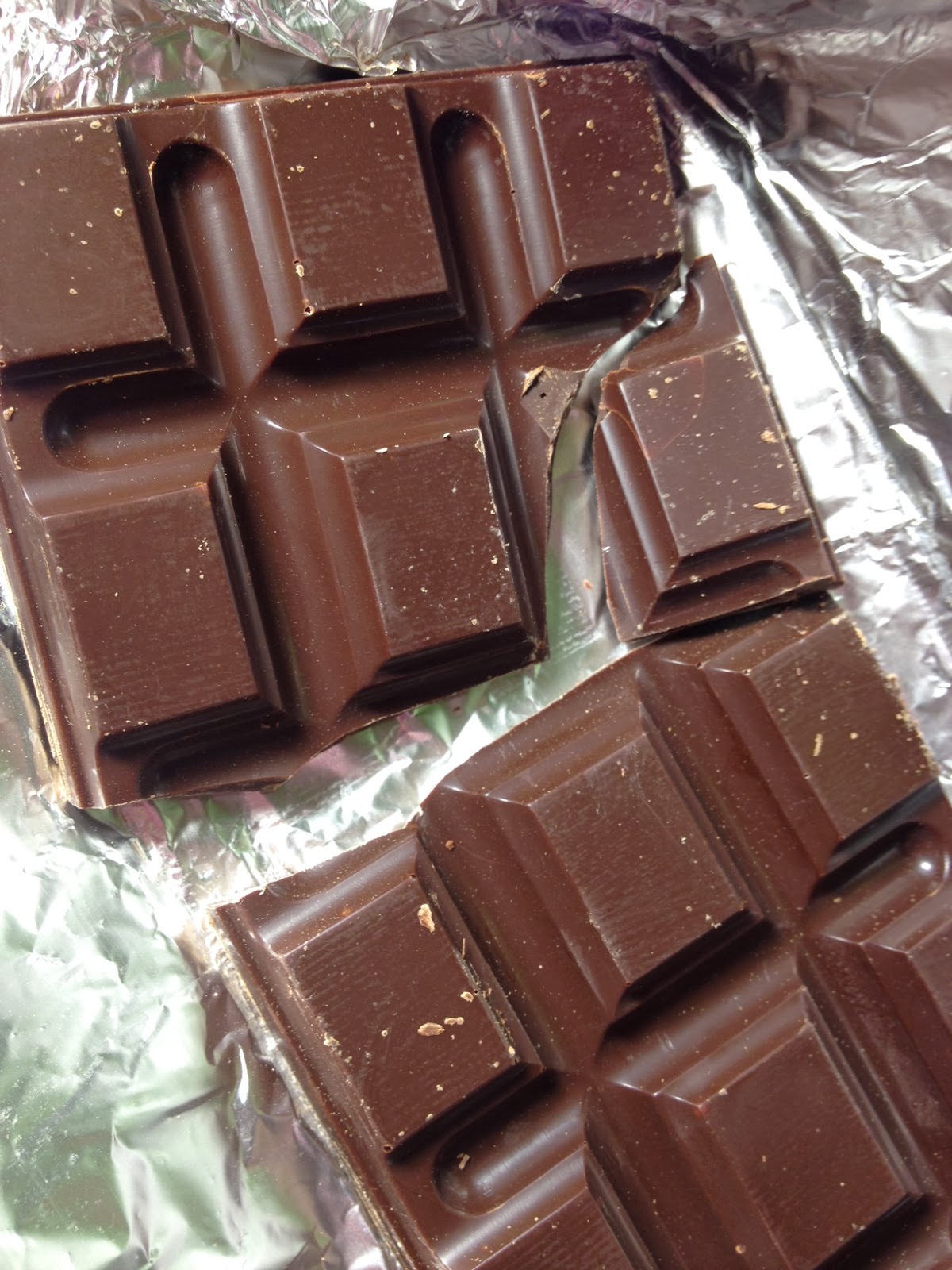 In a slightly alarming move, you bung everything into a pan and warm up. Then pour into a glass. I chose a glass similar to Bacardi’s, which is when I discovered that if you use a glass with no handle you’ll need to put gloves on to drink it. 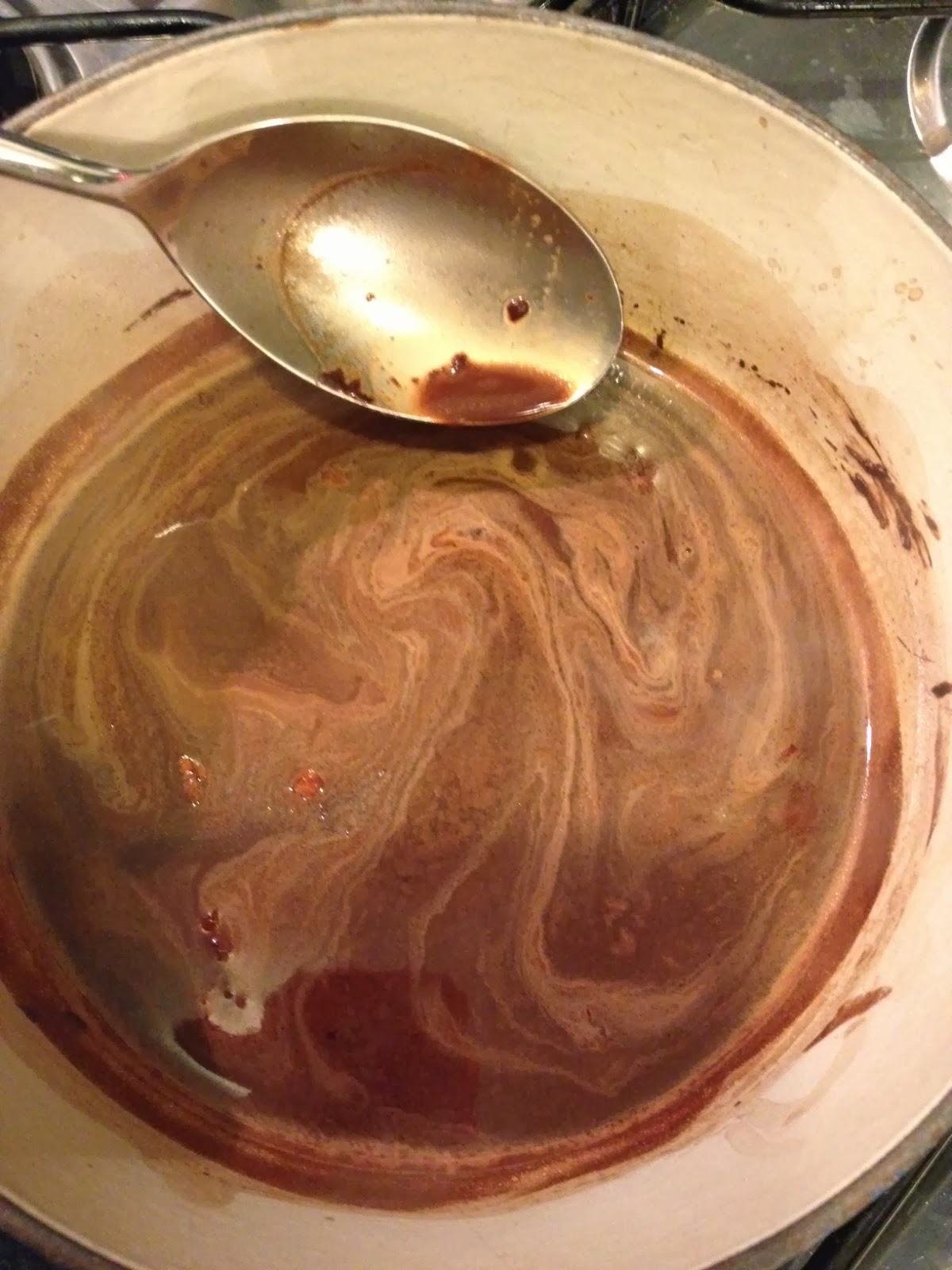 The recipe version is very ‘interesting’ spicy and strong and very warming. I made it again and used much milder coffee and more sugar. I also held back on the chilli flakes a little.
Still worth a shot if you like something with a punch.
And speaking of punch (did you see what I did there?) how about some rum punch.
I guddled about with rum, grenadine, lime, lemonade and some nutmeg…
Obviously by this point I’d had a mojito and two coffee-based cocktails so, clearly, I didn’t bother noting the ingredients, but, it was flipping lovely. 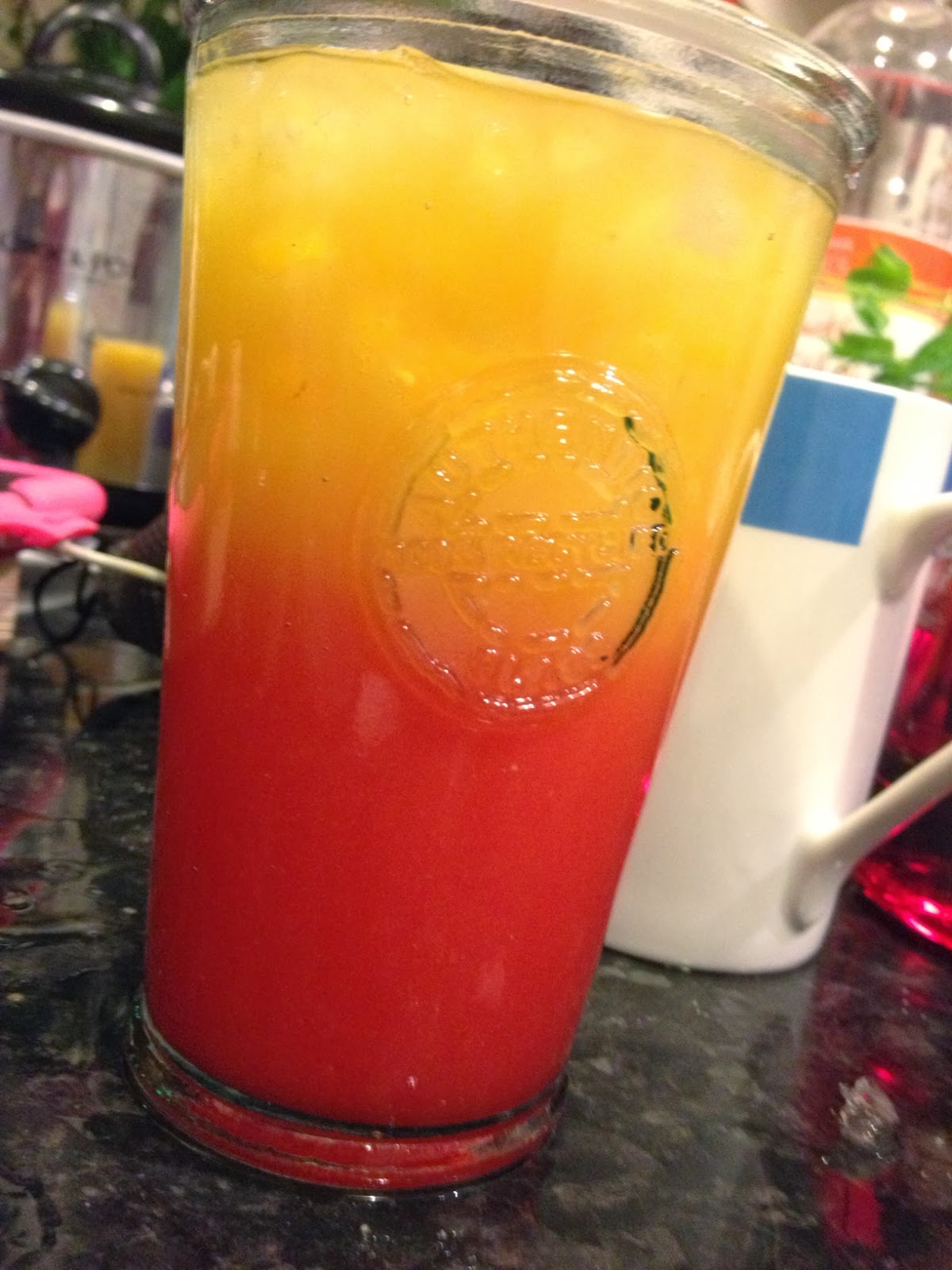 In conclusion, don’t sniff at cocktails or think they’re too fiddly to bother with…
Cheers.