You are here: Home / children / Don’t let your kids’ Christmas presents put them in danger
What are your children getting for Christmas? Are they going to be lucky enough to be unwrapping new smart phones, tablets or even gaming equipment like a new Wii?
I expect that up and down the country there will be thousands of delighted youngsters whose first move on December 25 will be to log their shiny new gadget into the internet. They’ll probably do it before you’ve even got out of your PJs.
Especially if this signals a new dawn of hooked-up living in your house, it’s a good idea to have a think about the potential pitfalls and dangers of your kids going online.
The old idea that you could control the situation simply by having the one computer in the house in a communal space and keeping an eye on who does what on it simply doesn’t work any longer.
My big Boys when left to their own devices are most likely found on their own devices – iPhones or computers. I’d like to think I know what they’re doing there, but I do have to keep checking.
That’s not to say I’m confident I have it right when it comes to their safety online. In fact, I have had one or two ‘moments’, like the time I discovered Boy Two had a Google + profile when I didn’t even know he knew G+ existed. I need to constantly keep checking everything OK and not allow myself to become complacent.
Luckily, Computer security experts AVG have a suite of ebooks packed with useful advice and hints. (I urge you to have a look, it’s much more interesting than you’d think and includes stuff on digital death and thoughts about your online profile.)
However, keeping to the topic, An Online Safety Guide For Parents is where you want to be.
It starts with a Robert Louis Stevenson quote: “Childhood is wholly experimental.” And that’s true the internet is an enormous playground with so much to explore and have fun with and not to be afraid of.
Here are the top tips:
Google your children. Be vigilant. Know what your kids are doing, which social media sites are they on, where are they going?
Set an example. Don’t live online. Talk about what you’re doing. Set screen-time limits.
Keep it real. Demonstrate that hear-and-now face-to-face communication is more important than something with a hashtag.
Mind your footprints. Teach children that the internet is forever and things they post today may follow them round for years.
But… 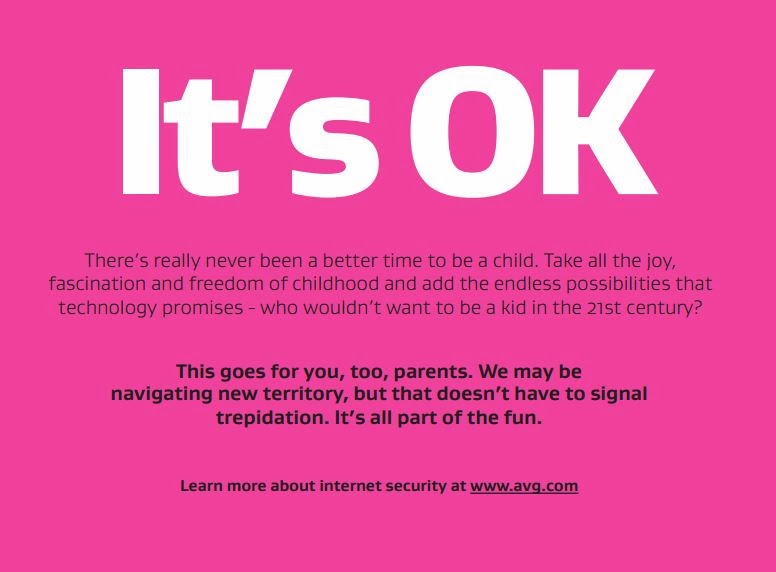