You are here: Home / American fridge / Appliances Direct – how not to deliver a fridge 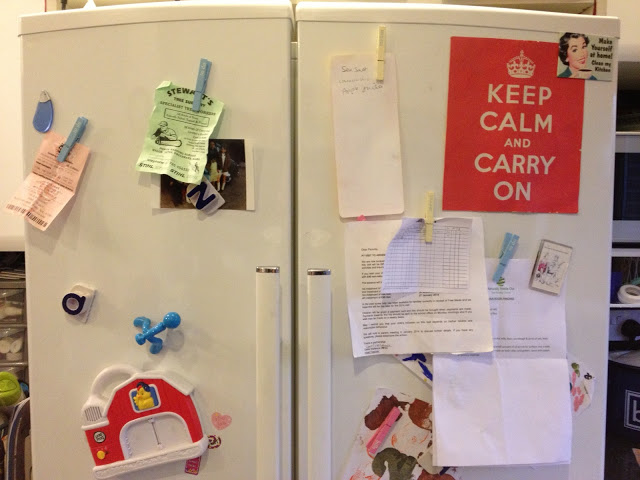 UPDATE Monday, 13 January. The delivery company Arrow XL have been in touch and sent their local manager out to look at my kitchen. He apologised for the inconvenience and a four-man team will deliver the fridge on Wednesday.

We’ve had the fridge-freezer for a while. Nine years actually. And lately it had been quite clear that we needed to put it out of its misery before too long.

The cracked bits, the weird noises, the door that wouldn’t shut…

So, I spent quite a bit of time looking online for a replacement. What I wanted wasn’t difficult. After all American-style fridge freezers are quite common these days.

Not such a difficult customer, I thought.

I chose one from the Appliances Direct website, paid £50 for large item delivery having noted that it would be delivered into the room of my choice (ground floor) and the packaging would be removed. Then I paid £15 to have the old one take away.

There was a phone call to confirm my order. No I didn’t want the special warranty but I want the old one removed. No problem.

Then a message saying January 27 instead. Apologies. Not to worry, I was happy to wait. Plus it gave longer for Operation Eat All The Stuff Out Of The Freezer to take place.

Then on Friday, January 10 a lady called to say it was coming the next day January 11 between 2 and 5. Brilliant. Short notice, but, on balance, brilliant.

The intervening time was spent emptying, defrosting and cleaning the old fridge freezer ready to go. The frozen food was either chucked out or packed together in the vain hope it might last until the new one was up and running. Never mind, a new fridge freezer was great news.

However, this afternoon the Panther, for he was left minding the Palace of Bundance, called me somewhat agitated.

Apparently the two-man delivery team arrived with van. Took one look at the freezer IN THE BACK OF THEIR OWN VAN, the place it was going and the one to be removed and pronounced it too heavy to deliver.

They said things like: “We don’t know how heavy things are until we see them.”

I know these things are big and heavy – that’s why I took comfort in the £50 charge for them to take care of the large and weighty appliance.

Inevitably, this is when we learn the Appliances Direct customer service office isn’t open until Monday morning. (Minor niggle that all lines to Appliances Direct cost 10p per minute and it took me three minutes to establish that there was no one there to speak to me at 4.30 on a Saturday afternoon.)

The old fridge is being coaxed back to life, hopefully briefly, and we’ll see what happens next.

I hope that on Monday I can report that the issue is resolved and the new fridge on its way with the appropriate number of men to put it where I want it.