You are here: Home / first aid / Things I learned from a Red Cross First Aid Course
Or the day I spent blowing into a small, plastic child. 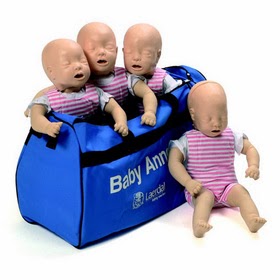 I have been very, very fortunate. In 14 years of parenthood, I have never had a real, proper medical emergency. We haven’t had any broken bones or stitches and here haven’t been any A&E visits.
Of course, there have been bumps, bruises, cuts and scrapes. Illnesses that had me worried and accidents that were near misses, but, like I say, we’ve been lucky.
Perhaps aware that luck may be finite, I was delighted to be offered the chance to attend a British Red Cross first aid course. It was first aid for baby and child.
At the start of the course, we were asked what our aims were. I couldn’t very well say ‘a bit like carrying an umbrella, it might keep the rain away’, or at least, not without sounding a bit strange.
So I explained that I wanted a better idea of when something is serious and needing expert attention and when something could just as well be treated at home, by me.
Here’s what I learned:
You can also call 112 instead of 999 in an emergency. Apparently it’ll get you through to the same place as 999 in the UK, but it also works elsewhere in Europe.
Hearing is the last sense to disappear. So if you have an unconscious casualty, you should always talk to them.
The recovery position is crucial. Much more important than you’d imagine. According to our instructor, 46 of the 96 Hillsborough disaster victims may have survived had they been put into the recovery position rather than laid on their backs.
The recovery position is a fun game all the family can play. It’s a good idea to play at putting each other into the recovery position until everyone in the family, from the smallest upwards is able to do it, and knows when to.
CPR in adults isn’t so much about getting someone breathing.You know how you see it on the telly, a few puffs of the kiss of life and they’re back in the land of the living. Real life isn’t like that, apparently fewer than one per cent of casualties will be made to breath by CPR. It doesn’t stop it being essential, however, as it keeps oxygen going to the brain until help (maybe with a defibrillator) arrives.
If someone has been drowned – always call an ambulance… even if they’re OK now. There’s a thing called secondary drowning and it’s not good.
For nose bleeds pinch the nostrils closed. I knew that pinching was involved, but I was never quite sure which bit you were supposed to squeeze. Now I do. Oh, and don’t forget to get the person to breathe through their mouth.
Priorities are airways, breathing and circulation. It kind of makes sense, if someone isn’t breathing it doesn’t much matter what they’ve broken.
Treat bee stings with a credit card. Kind of. If someone has been stung by a bee, use a card to scrape the sting off the skin.
There’s an app for that. Of course there is. The British Red Cross has an app for adult first aid and one for children. Download it now.
The Red Cross offers courses all over the country and they run day and evening. Book one, and with a bit of luck, you might never need to use it.
[youtube http://www.youtube.com/watch?v=HzFD6dcNvH8?rel=0])
“I am a member of the Mumsnet Bloggers Network Research Panel, a group of parent
bloggers who have volunteered to review products, services, events and brands for
Mumsnet. I have not paid for the product or to attend an event. I have editorial control and
retain full editorial integrity”

◄ An uplifting conversation that turns out to be rubbish.
How To Improve Your Relationship With Your Children ►