The panelists share a genuine warmth and respect for each other and appeared to enjoy the debate as much as the audience seemed to. Although, perhaps slightly, the demonstration of their amiability occasionally lapsed into pantomime.

Humour was everywhere. Laughter punctuated the whole event, even during the most serious discussions. It was, for Sally, one of the noteworthy features of the event. 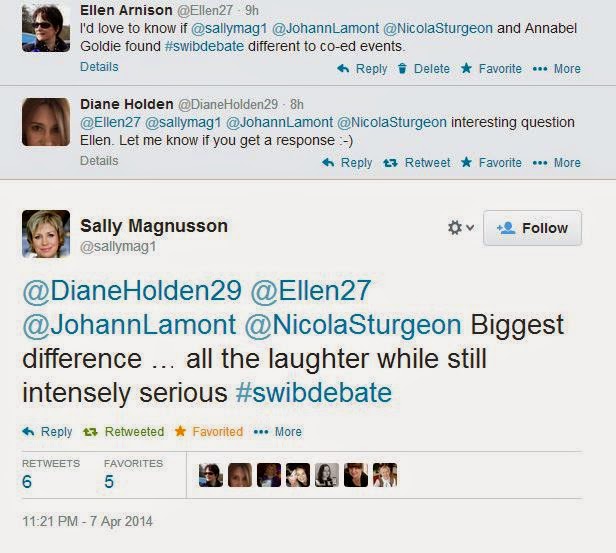 The best line… Came from journalist Ruth who described herself as “chronologically gifted”.

Margo MacDonald would have been proud. While I didn’t know the late politician in person, I know many who did and I was aware of her passion and integrity. We shared a tribute to her at the start of the debate and her example seemed to set the tone.

Facts are in short supply. Not through slight-of hand, but because the nature of the constitutional change (or not) we consider means that little is certain ahead of the game.

Women like certainty. The consensus was that female voters are “more sceptical” of independence because they are practical and struggle with the lack of absolutes.

Sifting fact from rhetoric is crucial. An excellent point from Annabelle was the importance of taking all claims and applying the test of asking whether the person making the claim has any control over the likelihood of it coming to fruition. I wonder how much political noise would be left…

Trust is the key. With a paucity of facts, what’s left? There was recognition of the electorate’s loss of faith in Westminster and the wider body politic. Can politicians of any stripe truly regain our trust? And what must they do to achieve that?

It’s possible to talk politics without having the urge to roll my eyes. This was the first political discussion of this type I’ve been to where I never once suppressed a sigh or felt someone wasn’t being heard properly. A gender thing? Perhaps.

The best question didn’t get answered. The panel (specifically the No contingent) were asked what they’d do in the event of a Yes vote. We hoped for a little look at how the landscape would lie in a devolved Scotland, at how the other parties would play their cards because we know they’ve all thought about their Plan B. But then again, that’s not really what we were there to talk about.

Thanks to the team at SWIB for pulling off an ambitious and important event.