It’s weird. Winter, apart from the Christmassy pine and cinnamon bit in the middle, doesn’t smell of very much. It’s too cold in exactly the same way chilled petrol station sandwiches have no flavour whatsoever.

However, summer – albeit a chilly and damp version – has arrived and to mark the occasion smells have been turned back on again.

The foggy, green freshness of a spring morning lets you know the season has changed quicker than the fact that you, for the first time in months, can dare to leave the fattest jacket behind. And as the sun comes up a huge selection of summer-time scents come back to life.

Here are some of my favourite whiffs now that winter’s gone:

Scorched meat: Oddly appetising, much more than it deserves to be. If, for example, you got charred animal protein dished up to you in a restaurant (especially if it came with a blade of grass or an insect on the side), you’d send it back. However, when next door fire up their barbecue you drool like a hungry dog.

Cut grass: Just like it’s supposed to, the smell of cut grass also instantly manifests the image of those white knee socks with the little patterns of holes in them, fundamentally depressing playground games and We’re On The Road With Ally’s Army.

Fake tan: So the heat is on, which, in this part of the world certainly, means that the pale flesh that has skulked under fabric all winter must be exposed – as quickly as possible. Consequently the air is filled with the aroma of slightly stale digestive biscuits, palms are stained and collars irreparably darkened. Begs lots of questions about what makes people think cold-tea coloured skin is more attractive than the paler version.

Melted tarmac: We haven’t had this one yet, but, hopefully, we will soon. When the sun gets so hot on a still day it’s as if the air thickens like wallpaper paste through which nothing can rush. The pavements and roads soak up the rays and emit a melty tarry smell. There probably ought to be a word for it.

Blossom: Oddly elusive. At the moment trees are groaning under the weight of pink, white or yellow heads. They cover the roads like glorious snow, but you only ever catch the most fleeting sniff of their scent. Once you try to recapture it, it’s vanished. Weird.

Poo: Why do dog owners (only some, I know) think that just picking up their pet’s fresh turd, bagging it and hanging it from the fence is their duty done? It isn’t. But all winter the natural refrigeration as kept it from stinking. Now, though, that belligerent German Shepard from up the road defecates right across the other side of the green and we get the benefit of the smell.

Holiday perfume: It’s a ritual. Buy perfume on outward journey at duty free, use liberally during holiday and forever after that scent will be associated with the break – for better or worse. Not, though, that I’ve done a holiday with a departure lounge for a couple of years – self catering in the UK has more than sufficed. However, I realise that I’d missed the new pong ritual. I was sent a bottle of Ghost Eclipse to review and it’s gorgeous – and exactly perfect to be my holiday aroma for 2014. The blurb says it ‘evokes feelings of carefree abandon’, I’d say it smells nice – lemony, flowery and a bit appley. 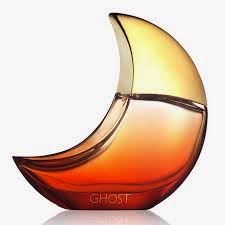