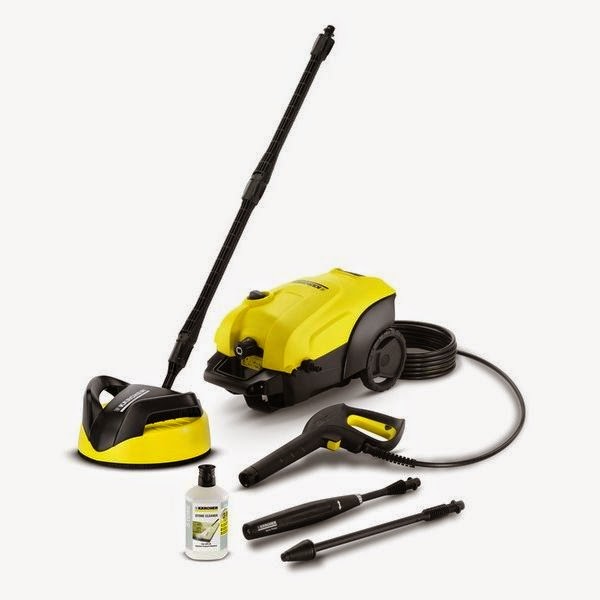 I am a big fan of Karcher products. I’m still deeply infatuated with my steam cleaner even after a couple of months of housework. Do you remember that advert from the 1980s where Paula Hamilton casts aside the jewels and furs before leaping into her car? “If only everything is as reliable as a VW.” 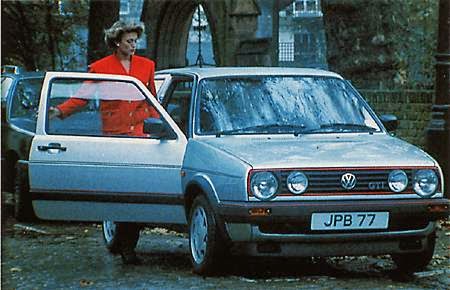 I’m a bit that way about Karcher products. They have the quality clunk about them and they just work… very well. Not, of course, that I’m in danger of chucking out my shiny things in favour of a few laps of the kitchen floor on the old steam cleaner. No chance.

But a steam cleaner arrived a few weeks ago and I was very excited. The familiar solid black and yellow of the sturdy body promised quality and, besides, everyone I spoke to about it said that a pressure washer was So Much Fun.

I’ve never used one before, but I was prepared to take their words for it. Although I had been mistakenly led to believe male strippers and car boot sales were fun too. But, I digress.

Weeks passed before I could find out for myself. The rain continued to stream down the windows and even I know you’re supposed to use a pressure washer outside only. Still, it gave me time to resolve the matter of the outside tap fitting and the mysteriously vanished garden hose.

Finally the day dawned dry and weekendy. Here’s what I learned from using a Karcher K4 Compact pressure washer.

The outside tap thing isn’t necessary after all. You can run it off a water butt (paddling pool/ very large bucket) if you want. Should have RTFM first, shouldn’t I?

Things are simpler than they seem. The bits that come out of the box seem baffling and complicated. However, as with the other Karcher toys, it’s always easeir than you expect. A few clicks and off you go.

Wow. It’s powerful! The first blast takes you – and everyone unfortunately enough to be nearby – by surprise. Yes, yes, I know it says so on the box, but the strength of the jet is impressive. A few exploratory squirts and most of the gravel has been redistributed from the path to the grass.

It shifts dirt quickly. In minutes grubby marks, moss, slimy stuff, grotty blobs and the green stuff has gone. Even squashed flies and diesel dribble on the car. This seems like the simplest thing.

Things can seem simple until you turn round. And that’s when you realise that the dirt that you shifted has been blasted back onto the thing you cleaned first.

There’s a knack to pressure washing. Probably everyone but me knew this. I suppose Paula Hamilton would have looked a bit of a prat if she leaped into the Golf and bunny hopped a few yards before stalling. You have to learn how to use this stuff. Good news is that we have professionals from https://lasvegaspressurewashingpros.com/ to do the pressure washing for you.

The website said it was child’s play… they weren’t wrong. I nipped down to the shop for a few minutes mid Karch. When I came back the whole family – Panther of News included – were standing around looking very damp and sheepish.


Practice makes perfect. OK, not maybe perfect, but certainly better. It’s clear that the pressure washer is very effective, and a lot of fun, but only if you’ve learned how to use it properly first.

You forget how good things can look. Finally the front step looked clean, the grouting clear and the green stuff banished. Rather smart, I’d say. 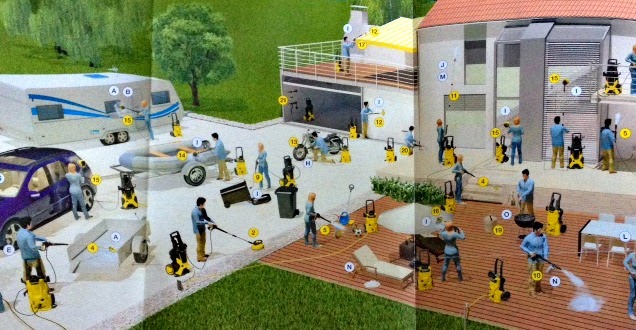 Diagrams aren’t always like life. This is the leaflet in the box that illustrates the many, many ways you can have a good Karch with your pressure washer. The things missing are, as far as I can see, someone who managed to splash themselves from head to to with dirty water, someone who had to start again after spraying the wrong direction, someone whose kids thought it was great fun to soak everything.

Verdict: As ever, the quality is top notch. It’s very versatile and effective. But you need to be patient and learn how to do it properly.

Karcher sent me a pressure washer to test. I’m determined to use it with competence… soon.