You’ve probably noticed. There’s something going on in Glasgow this week. 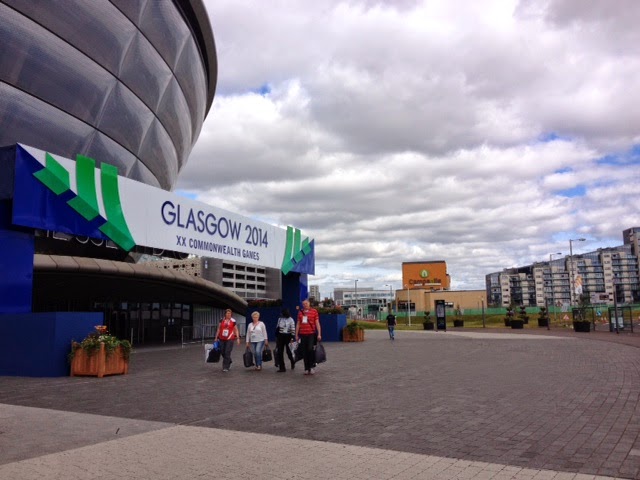 It’s a little bit like an artist’s impression of some improbably marvellous futuristic city that has come to life. Clean streets and squares throng with smiling groups togged out in matching track suits like off-duty astronauts.

There’s a sense of united purpose and anticipation tempered only slightly by the bewilderment of those who hardly recognise their home town. Indeed, the commonwealth games seems even to have rendered the mean streets safe with the biggest danger tripping over a film crew or poking yourself in the eye with your security pass.

I’ve been working at the SECC for a few days now. (For a couple of weeks) I’m a sub editor for the Games News Service, based in a corner of the increasingly busy media centre. And it’s somewhere I’m delighted to be.

Way back last year I knew that when the Games came to Glasgow I’d have to find a way to get involved. It would be horrible to have such an exciting thing happening on our doorstep but not being part of it – like hearing an amazing party next door that no one invited you to.

Some of the desire to be involved is simple nosiness – what does a thing like this look like from the inside? Bustling and remarkably well organised, since you ask.

But the bigger part, I suppose, is a hankering to belong inside something noteworthy and exciting. It’s an addictive sensation – part of a well-oiled machine.

In fact, I learn there’s a whole community of ‘eventers’ who travel from one championships to the next world cup. If you look closely you’ll spot the odd Sochi t-shirt or pair of London 2012 trainers.

From the inside, it doesn’t matter how much it all costs, the relevance of the Commonwealth or what you think of rules of boxing: What we’re doing here matters, and that’s all that matters. And it’s going to be good.

◄ NT Live Skylight: How perfection is only ever a few pixels away
When will there be rain? ►