You are here: Home / alcohol / Poetry is not the most important thing in life… I’d much rather lie in a hot bath reading Agatha Christie and sucking sweets
It’s quiet and I’ve sneaked off to write a blog post. You know how inspiration is as easy to catch as the reason you went up stairs in the first place, and just as frustrating.

But I’m happy. All week I’ve had a hankering to listen to some Richard Burton doing some Dylan Thomas. The radio keeps offering me silky snippets: “To begin at the beginning: It is spring, moonless night in the small town, starless and bible-black.”

Then it clunks back to Today or something else decidedly un-silky. However, I’ve found all of Under Milk Wood on Spotify. Hours and hours of lug-lapping loveliness. Try it. Impossible to listen without a great grin sneaking onto your face.

“The only sea I saw was the seesaw sea with you riding on it. Lie down, lie easy. Let me shipwreck in your thighs.”

So I’ve given up on the other thing I was trying to write while Thomas fills my head. 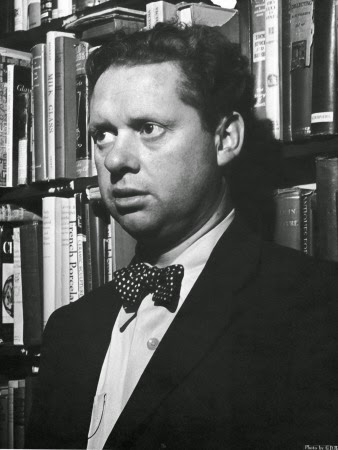 Instead, I thought “stuff it, I’ll do a Dylan Thomas post”. (can’t you see the poetry in my soul? kindred, I tell you).

The Panther of News would call first dibs on Thomas as muse anyway, what with him being something of a frustrated bard. In fact, he is hot-foot from an trip to the real Llareggub during which he cut about the bars of Laugharne almost sporting a spotted bow tie and celebrating the best excuse he’s had in a long time for a night of beer and melancholy.

Thomas was born a little over 100 years ago which accounts for why the radio has been awash with tempting titbits and why you’re getting this post.

I wonder what he would have written if he hadn’t died at 39 after decades during which he applied himself to drinking and destructive relationships as much as he did to poetry.

“An alcoholic is someone you don’t like, who drinks as much as you do,” he said.

Though it’s much easier to like a long-dead alcoholic, than I imagine it would have been to live with one. What is it with creative types and booze? Perhaps it’s true that a talent so strong wears out its vessel. The muse doesn’t stalk the corridors or power or the supermarkets of the middle classes much. Content doesn’t rage, rage against very much, except maybe cold callers and dog poo.

“When one burns one’s bridges, what a very nice fire it makes.”

I find this quote: “Someone’s boring me. I think it’s me.”

I’m still here. Instead of thinking up something clever myself or coming round to an intelligent conclusion I thought I’d just put one of his poems here. After all, I couldn’t even work out how to make a Bugger All backwards joke work.

Do not go gentle into that good night

Do not go gentle into that good night,
Old age should burn and rave at close of day;
Rage, rage against the dying of the light.

Though wise men at their end know dark is right,
Because their words had forked no lightning they
Do not go gentle into that good night.

Good men, the last wave by, crying how bright
Their frail deeds might have danced in a green bay,
Rage, rage against the dying of the light.

Wild men who caught and sang the sun in flight,
And learn, too late, they grieved it on its way,
Do not go gentle into that good night.

Grave men, near death, who see with blinding sight
Blind eyes could blaze like meteors and be gay,
Rage, rage against the dying of the light.

And you, my father, there on the sad height,
Curse, bless, me now with your fierce tears, I pray.
Do not go gentle into that good night.
Rage, rage against the dying of the light.