You are here: Home / Antonine Wall / The Falkirk Wheel: Who knew it was so much fun? 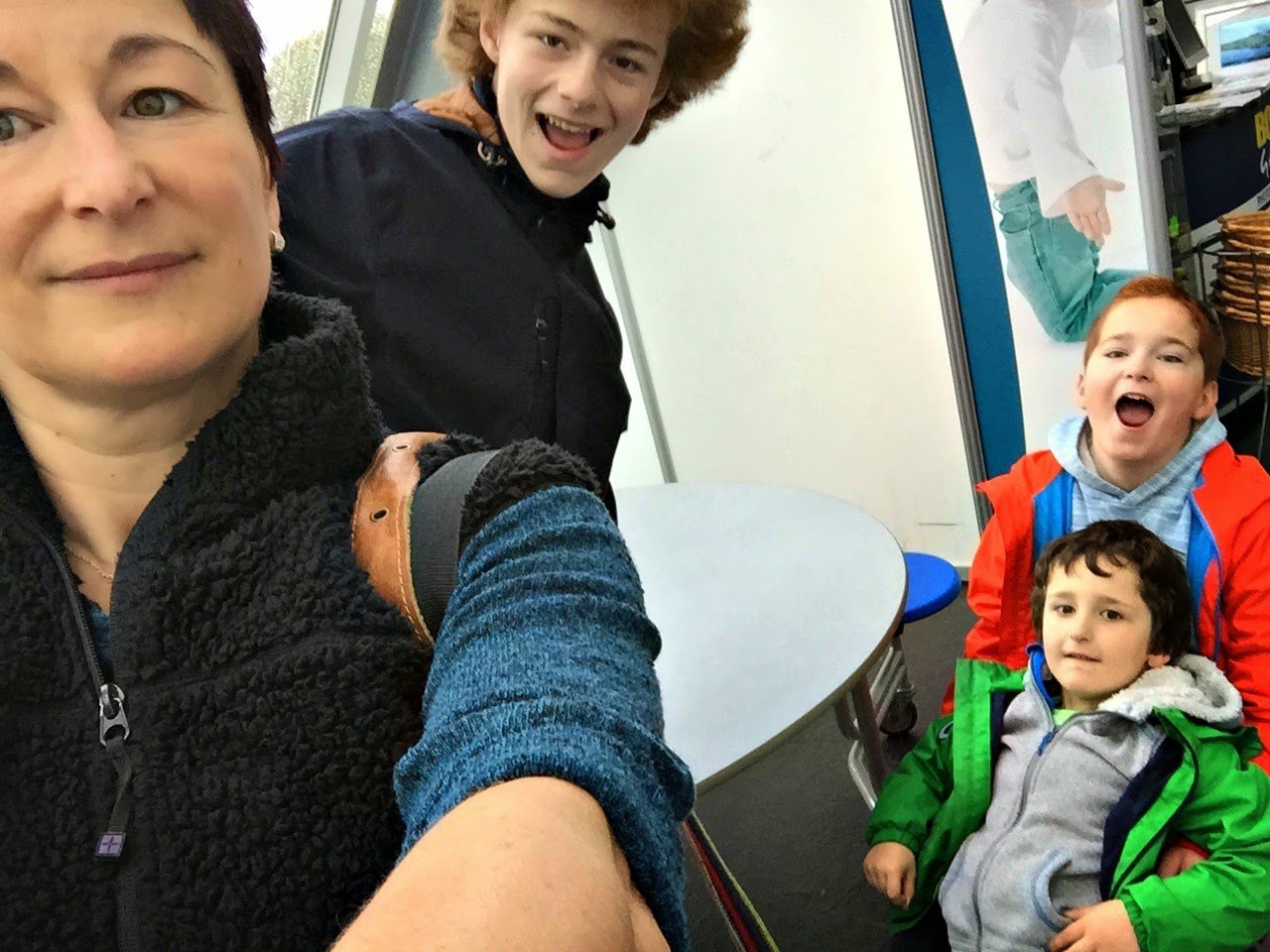 OK, I confess. When we set off for the Falkirk Wheel on a damp Saturday morning in October, my hopes for a wonderful weekend day were not high. And neither were the kids.

We’d been to the “the world’s only revolving boat lift” Falkirk Wheel many years ago, before there was even a Boy Three. My recollection was that it was interesting enough, but, playpark aside, not thrilling for kids. 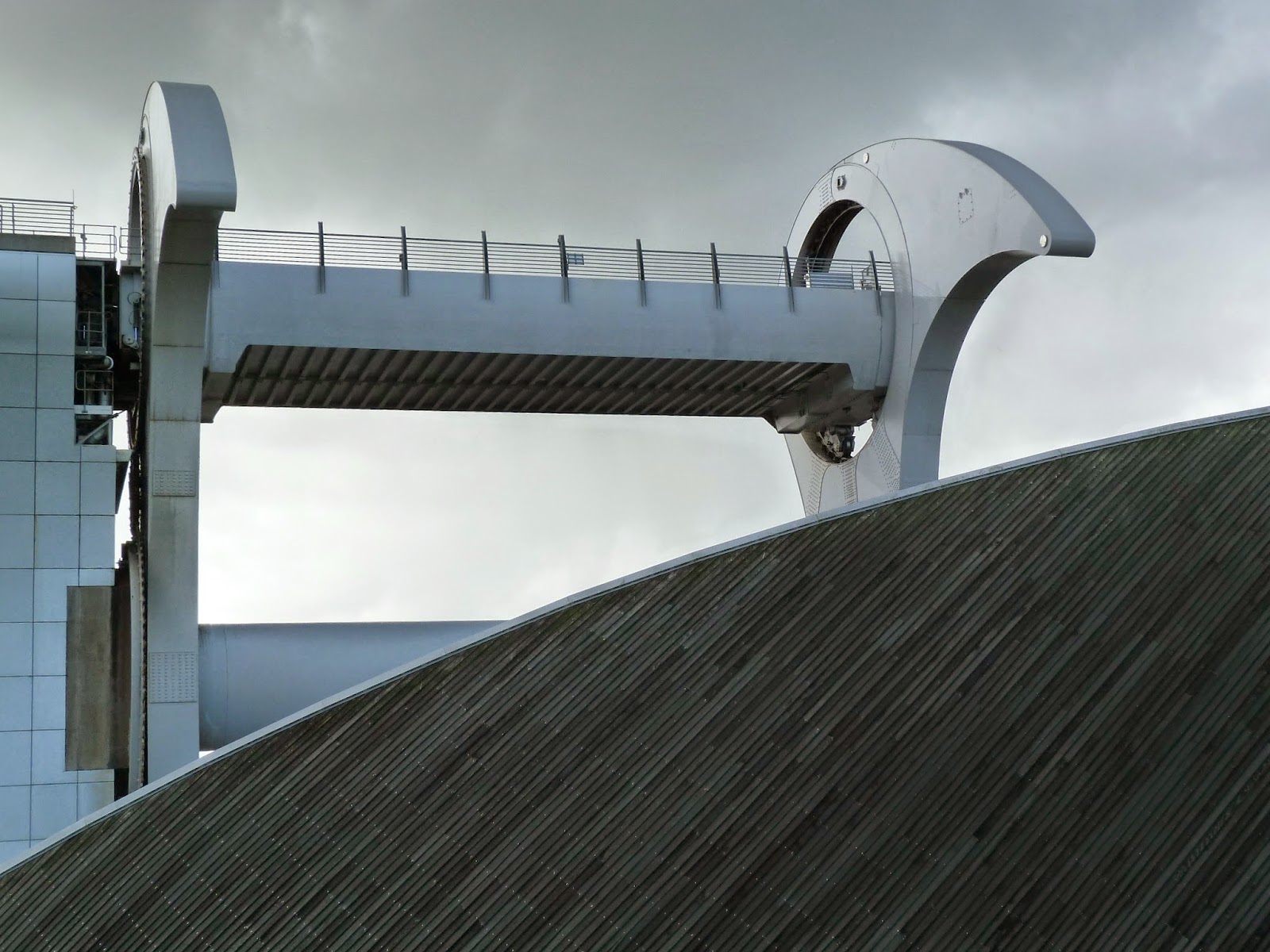 But when we were invited for another look and heard words such as “water walkers” and “water play area” I thought it was time for another shot as there was clearly far more on offer. 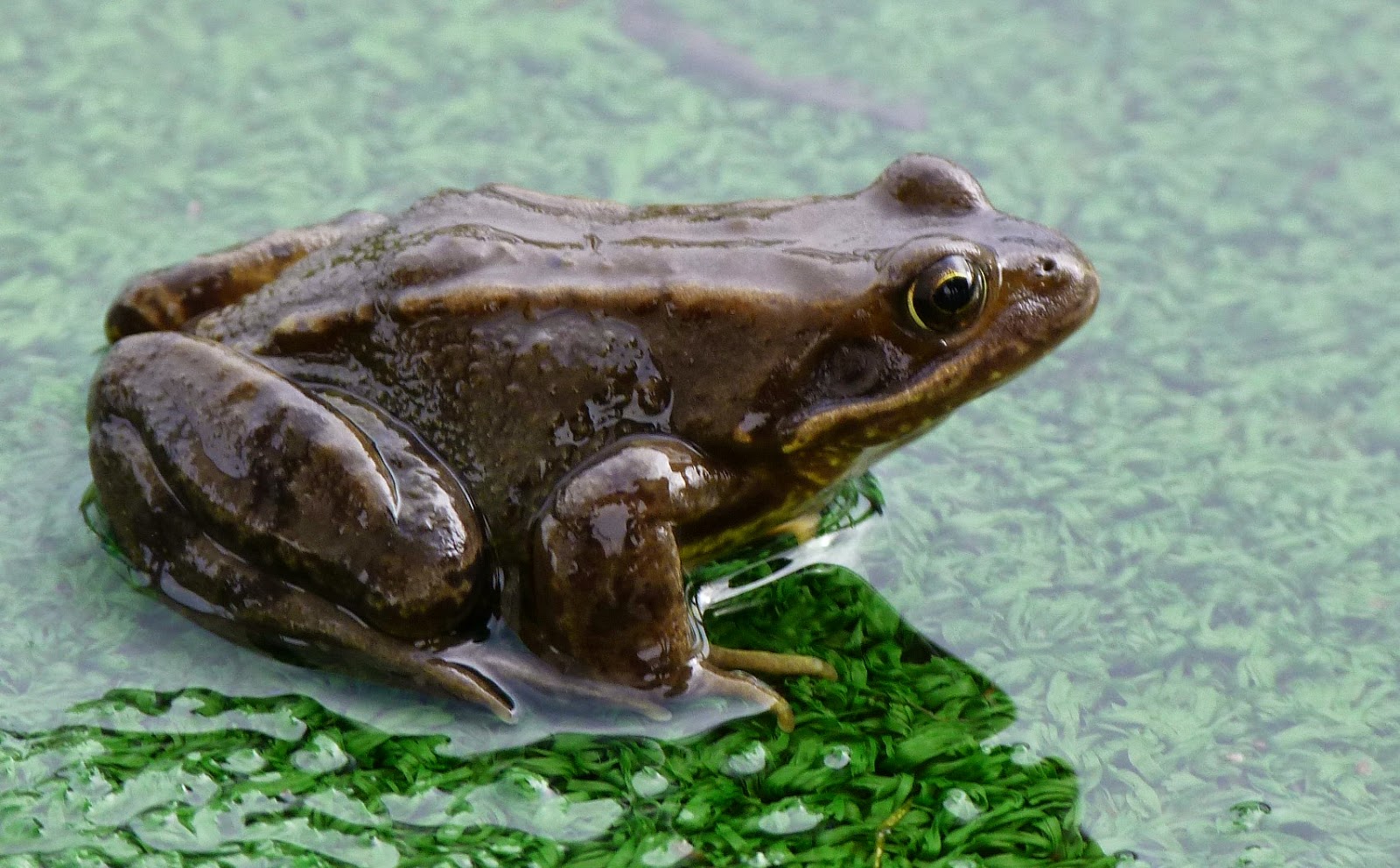 The Falkirk Wheel is a remarkable engineering solution that links the Forth and Clyde Canal and the Union Canal for the first time since the 1930s, but, as the skipper of the Archimedes boat said: “This isn’t Alton Towers.”

However, it had stopped raining by the time we arrived and presented ourselves to Eddie from Outsidetrax. Eddie runs the Water Activity Zone and bike hire at the Falkirk Wheel.

Within minutes of our arrival, I’d managed to get a selfie with the Boys and we’d found a frog. Portents of a great day.

Then Eddie, brooking no debate, packed the three Boys off in a canoe. “Teamwork makes it happen,” he said. 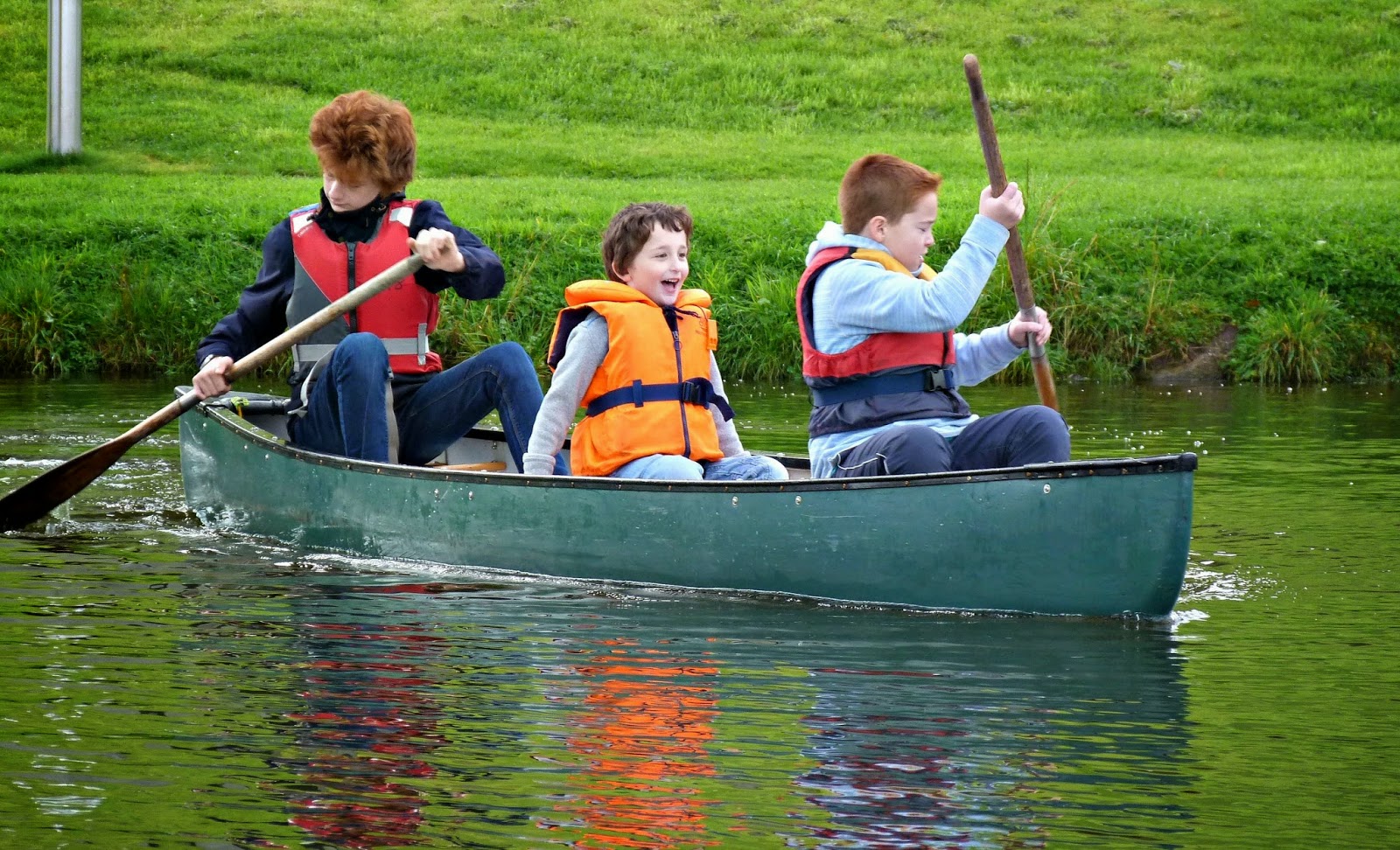 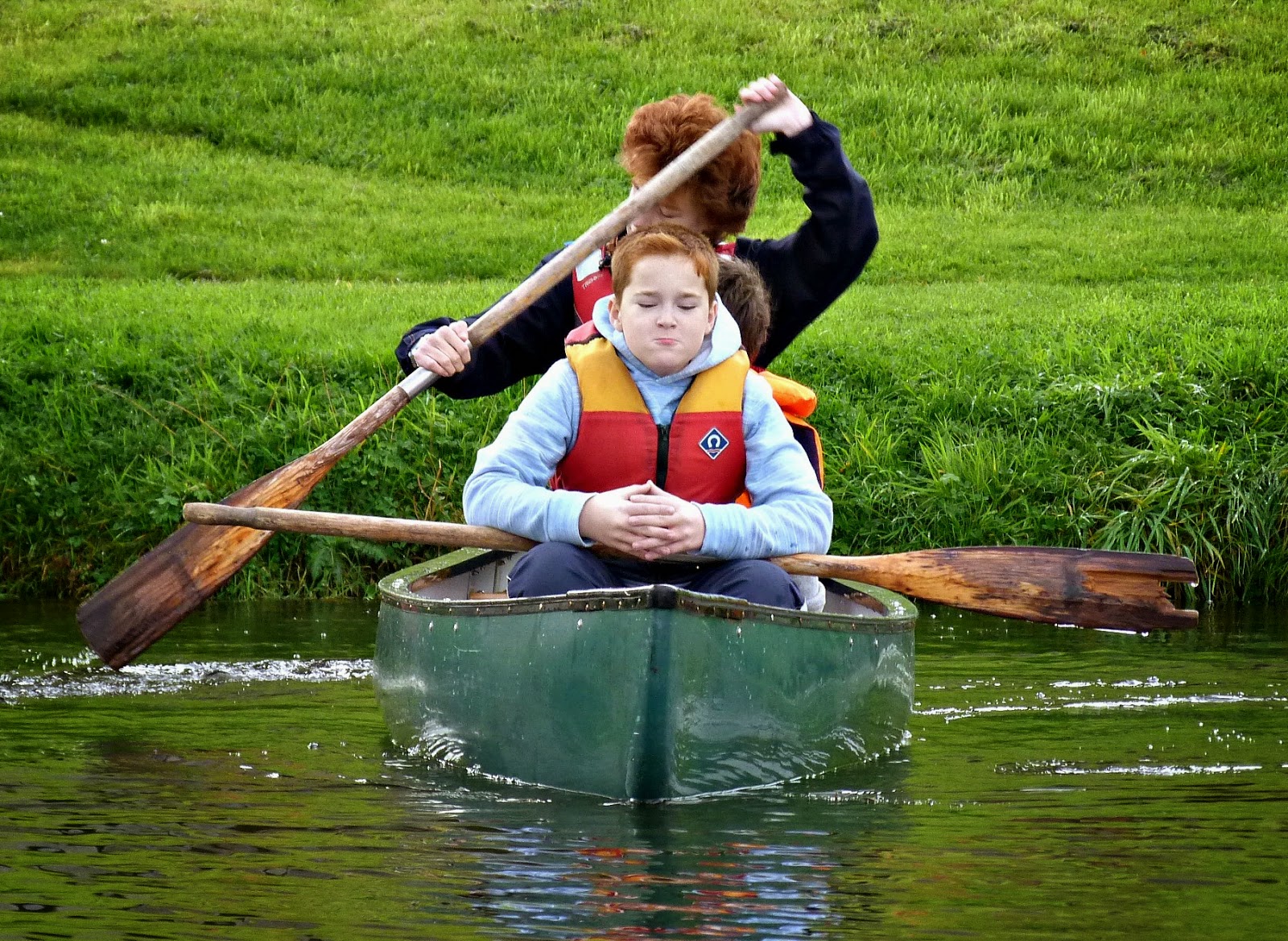 And it did… for a while. It’s a great place to get a flavour of canoeing.

There are taster sessions in the basin or it’s possible to hire them for longer and make a journey along the canal.

Then it was time for waterwalking. This was possibly my favourite moment of the day: 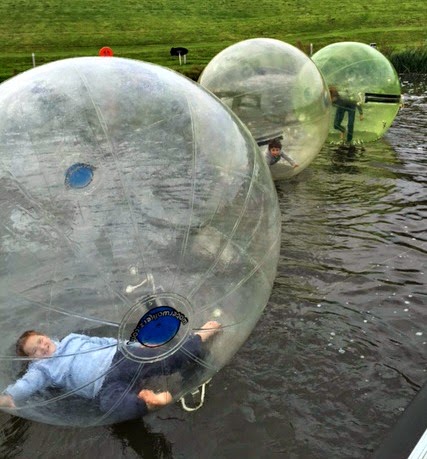 I asked Eddie if they could stay there all day as they were clearly having fun – and so was I. But he said that might cause problems after a few minutes when the oxygen ran out. Oh well.

And apparently that meant it was my turn. 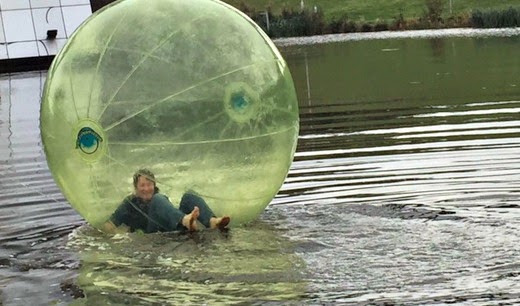 It’s more entertaining, but also more effort than it looks. (Tip: Make sure you’ve not your five-year-old and your new iPhone 6 alone together near water, it can cause anxiety.) 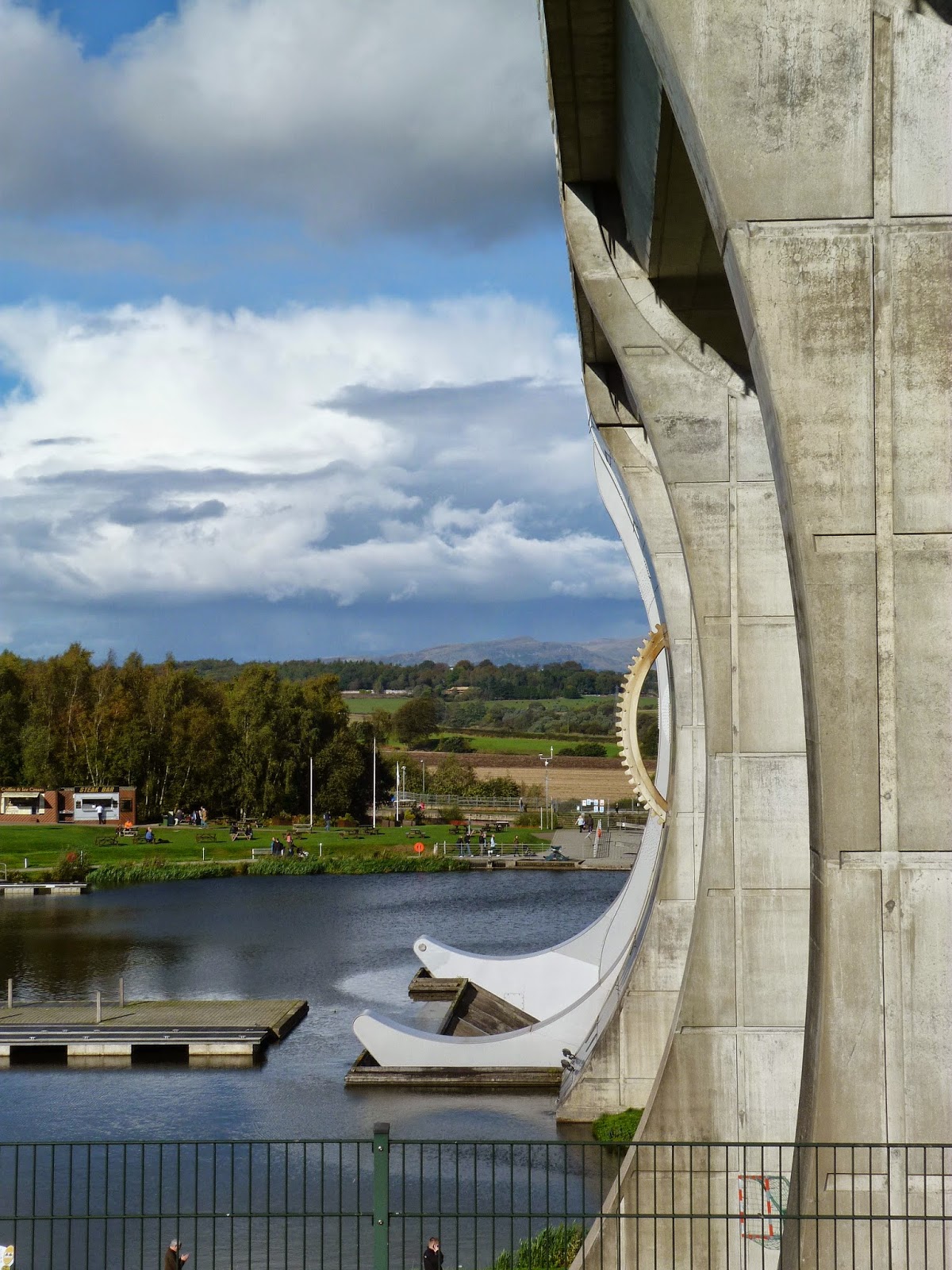 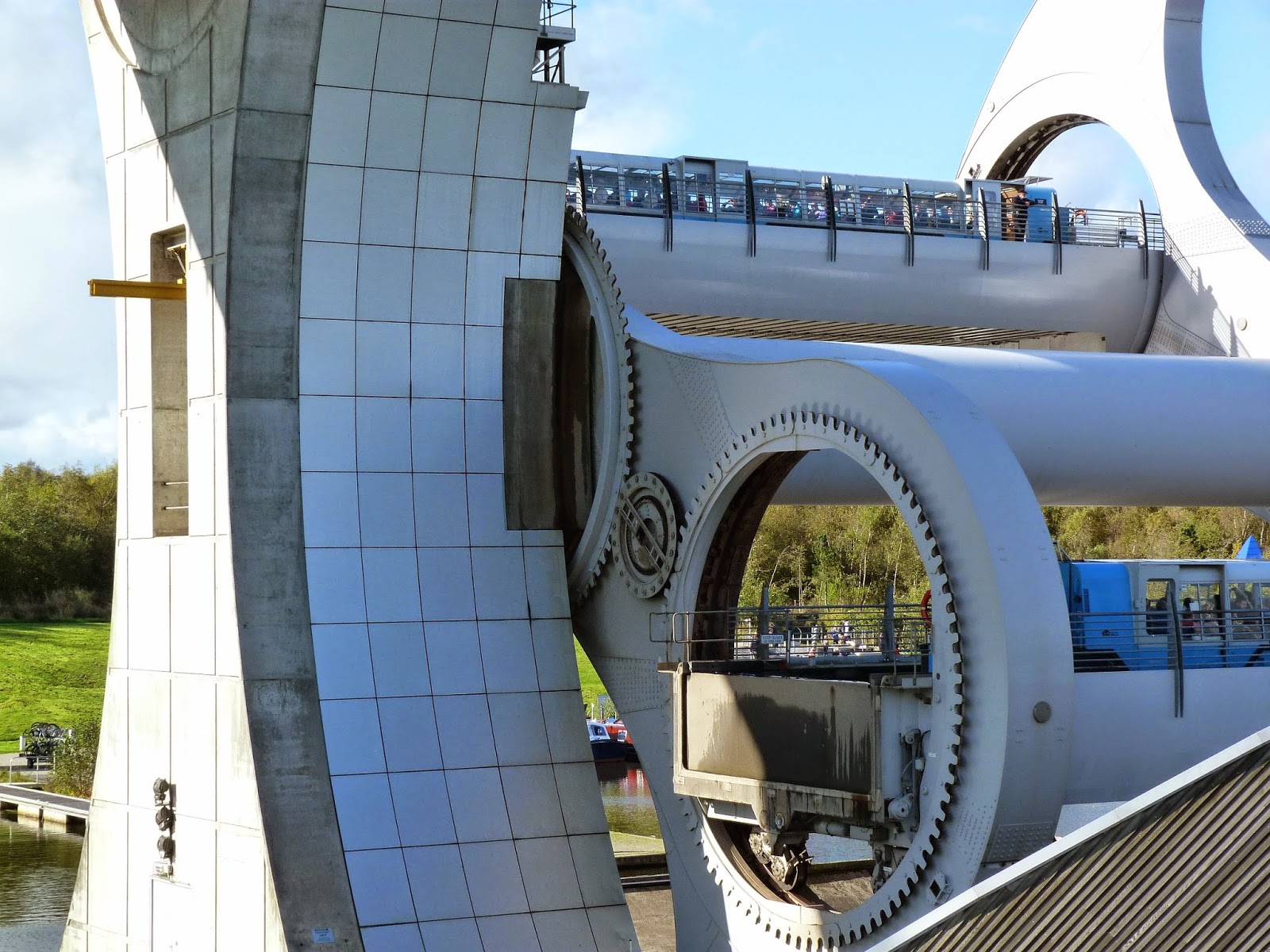 Our next stop was on the Archimedes. The boat that takes you up in the wheel, through the pinch point in the Rough Castle Tunnel and back again.

It is a remarkable thing and there’s lots of history and other interesting stuff to be learned to. Did you know that “navvy” is short for “navigator” the term used to describe the manual labourers who build the canals and worked on major civil engineering projects? The wheel revolves in both direction in order that wear on the moving parts is evenly distributed. Both tanks of water weight the same regardless of the vessels on board. This is because the weight of water displaced is equivalent to the weight of the vessel doing the displacing.

The view from the top is brilliant too, from the glinting Kelpies to the chimneys of Grangemouth.

And then we were down for lunch. The cafe does an extensive selection of sandwiches, toasties, home-made soup, baked potatoes and, more importantly, fresh cakes. We were ready for it.

Refreshed we headed back for more fun. There is a mini-canal and water fun area as well as the play park. 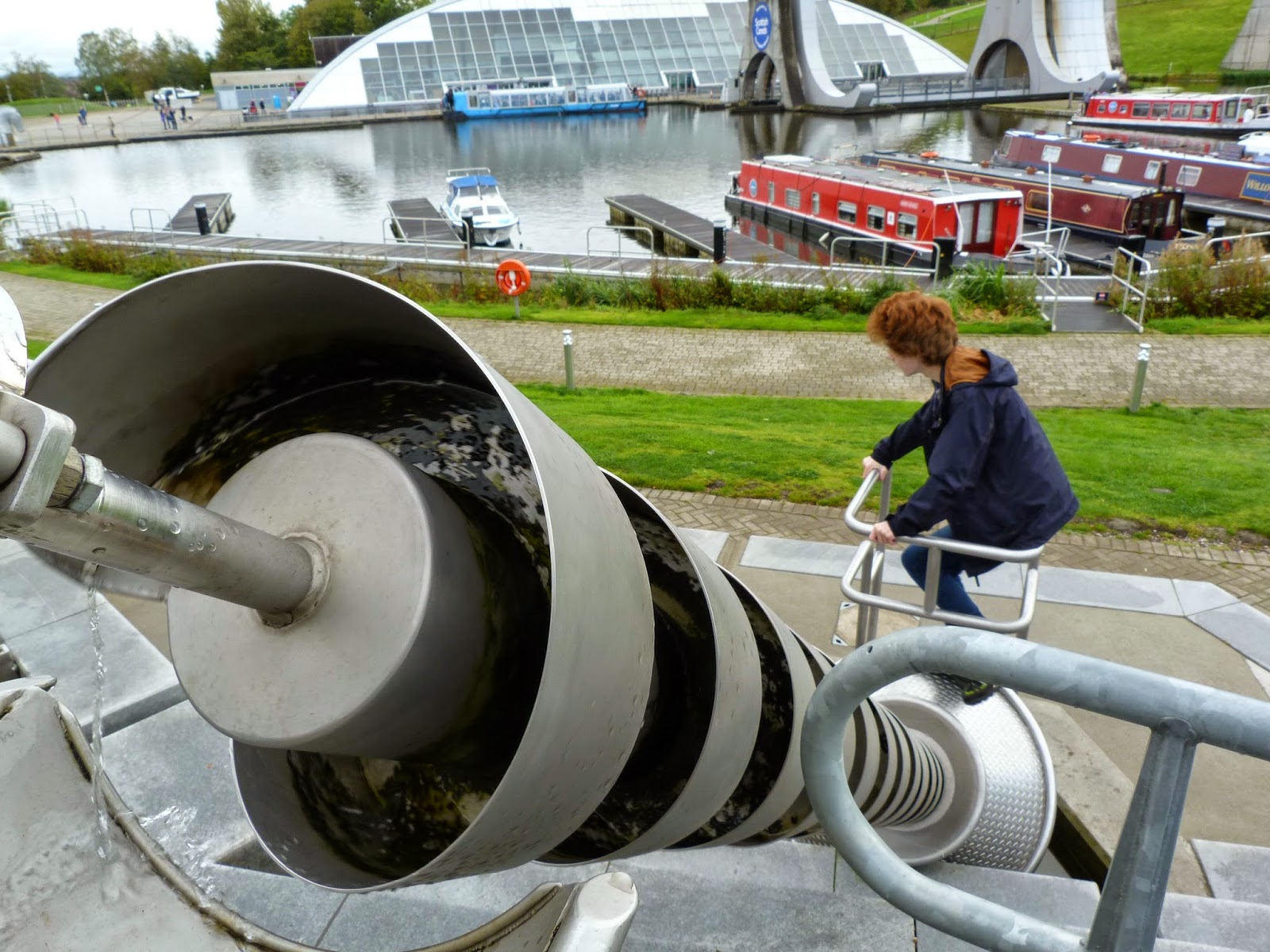 There is lots of fun to be had making the Archimedes screw work and pouring water through canals, locks and water wheels. (Your kids will get damp so bring a change of clothes or a hardy attitude.)

The Falkirk Wheel is handily just a bike ride from the Helix and the Kelpies. Rent a set of wheels – or bring your own – and you’re off along the towpath. If you are thinking of buying an ebike checkout wisperbikes.com.

We decided instead to walk up the network of woodland pathways to the site of the Antonine Wall and Rough Castle Roman Fort. For me the wooded glades and views were beautiful, for the boys there was mud and place to hide, plus lots of room for making noise and charging about… even Boy One who is not one of nature’s chargers about.

What we loved. Waterwalking, exploring and finding out there was a lot more to do than we thought.

What we loved less. The cafe can be busy and some of the mini-canal features looked like the might be due a little TLC after a long summer.

Who will should come. Everyone. We struggle to keep the Boys – aged 15, 12 and 5 – happy at the same time, but the Falkirk Wheel managed it. The sciencey/history stuff engaged the older boys and the play was enough for Boy Three. There’s lots to do and you can be as physical as you like.

In conclusion. Even if you’ve been before, come again, you’ll be surprised at what’s there. We’ll certainly be back.

Cost. The boat trip, bike hire and Outdoortrax activities have to be paid for, but there’s lots to see and do without opening your wallet too.

◄ Things I learned while canoeing the Great Glen
Still Game? No, not really… ►