You are here: Home / parenting / Taming the Tiger Parent by Tanith Carey

The other Friday evening I drove 34 miles between the end of school and, eventually, gin o’clock. It was all on the account of my kids and their various activities.

While unusual for me – I know lots of parents who cheerfully chauffeur their darlings round the county: football, dancing, Kumon, drama, swimming, athletics, chess, rugby, Scouts, Brownies, and so on. Two or three activities a night, rammed in between nutritious meals, neat homework and teeny, tiny portions of carefully supervised computer gaming.

The thought of it has the potential to make me shrivel with inadequacy: Yet another way I’m failing my kids.

I’m so far from a Tiger Mother that I don’t think I even register as a pussy cat.

My Boys do a thing or two a week and only then if it’s something they really want. Unlucky for Boy Three his thing is sitting in the car while we take his brothers to their things. For us it has been mostly Scouting with small side orders of swimming and football. And that’s it.

I don’t stress about how well they’re doing at school – but confess that moving from the village with the top-ranking private school to one with a fairly-well-ranking state school was as much so I could get away from the spotlight of competition as anything financial.

I’ve never bought in to the idea that motherhood is all about feeling guilty – for goodness sake, it’s tough enough without making up reasons to berate ourselves. Equally, I do believe that the greatest service we can do our children is to lead by example. And how can being exhaustingly, relentlessly, single-minded in our ambition for our offspring be a healthy act to follow? 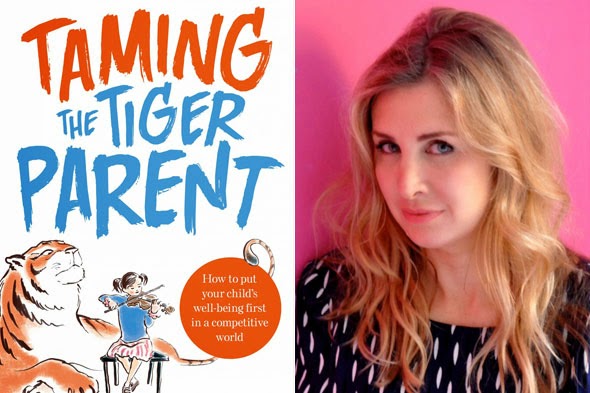 So when Tanith Carey asked me to review her book Taming the Tiger Parent, I was delighted.

She calmly and sanely presents the case that by pushing our kids to achieve – even in the misguided belief it’s for their own good – we are causing damage. Pushing them away, causing them anxiety and generally making everyone miserable.

Instead, she explains, we must let our kids be free to be themselves, to be young and just to love them as they are.

“The change starts with you, letting go bit by bit. We need to set aside our ideas of what our children are ‘suposed to be’ – and let them be what they are.”

And if  you haven’t got it yet, I urge you to read her book instead of googling league tables, tutors and classes.

◄ Mo and Roxy Razzaq: RBS – Finding Scotland’s Real Heroes 2014
Middle-age: the nightmare no one warned me about ►