You are here: Home / boys / Deadline for a bicycling beaver…

Way past bedtime on a wet Monday evening and the Panther and I were to be found running up and down a slight slope in the park, him in his work trousers.

Not, of course, that we had found a new exercise fad. In fact, the Panther was putting more effort into shouting instructions and eating a slightly damp cheese sandwich than actually running. A new take on dinner to go.

It was because there was another deadline. Isn’t it funny how deadlines are supposed to loom? I rather think they don’t, because if they did loom, then you’d probably have noticed them long before and taken appropriate (ie digit removing) action.

Anyhow, this deadline was snapping at our ankles like a curmudgeonly terrier. It was the deadline for Boy Three to be able to ride a bike.

He became a beaver a couple of weeks ago. Proudly following his big brothers into the scouting movement. He’s very keen. His enthusiasm only dented slightly by failure to understand the rules (or the point even) of rounders. It’s very hard to explain. Go on, try it without saying “it’s a bit like cricket, only round”.

It has been announced that next week’s meeting was for them all to do their cycling badge. If they could all, please, bring a bike, helmet and pump. Super.

Only Boy Three had never actually got round to riding the bike he got the Christmas before last. It was actually dusty. Initial enthusiasm foundered somewhere between the stabilisers on/pedals off debate and the never ending drizzle.

Unable to face the shame of having the only beaver in town not achieving this milestone (me) and the possibility of his non riding leaving him sobbing (Panther) we sought wise counsel (Google). And so we spent three damp evenings yelling encouragement and rubbing bits better until, by George, he got it.

His efforts – and ours – rewarded by him earning the title Beaver Of The Week. 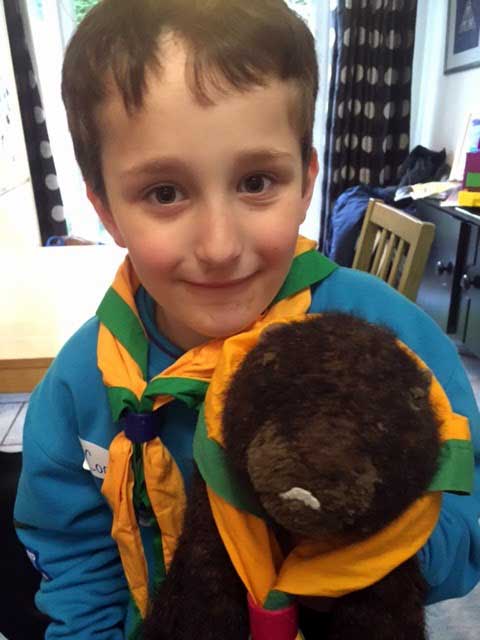 I did wonder though, if this last-minuteness isn’t something of a flaw. Isn’t the more grown-up thing to get one’s act together and do The Thing well ahead of the final few days? Probably. The world is probably full of calm, organised people who have done the packing, bought the right thing, lost the weight and sorted out the stuff… all in good time. Only, I’m just not one of them.