You are here: Home / blogging / Yes, and… let’s go to Edinburgh for the night

Edinburgh in August. Ugh! Crowds, idiots on unicycles and shouty antipodean jugglers. Why would you even bother?

It’s a little bit like that if you’re trying to get somewhere around the centre of the city. Luckily for me, though, I don’t have to. It’s one of those viewpoints that speaks of world-weary got-the-t-shirt experience, rather than actual muttering and swearing inconvenience.

The Festival and all that goes with it is a hoot. Great fun. And I miss that I no longer live in the Capital and have the leisure of long evenings nursing beer and celeb spotting.

So when the people from Premier Inn said come to Edinburgh, blog about our lovely hotel and take part in a comedy improv, they had me at free night in August. “Yes, please,” said I. “And can I bring Boys One and Two as they’ve never been to the Fringe?”

Here’s what I learned from a night in August.

A shouty Australian can be worth listening too. We stood in a gusty High Street and watched several. Interestingly the one who made a big point of asking for donations and telling people how much to give, seemed to make much more cash than the one who didn’t. Kind of obvious, but we usually don’t like to ask.

Budget doesn’t mean rough around the edges. Most of us have, in the interests of parsimony, booked into one of those something lodge hotels and, as we tried to sleep under scratchy sheets ignoring the brutalist decor,  wished we hadn’t been so stingy. Premier Inns aren’t like that – they’re actually very pleasant. The sheets are crisp and smelled of lavender and the mattresses are comfy.

If you don’t read the details, you can find yourself pretending to be a robot in public. The comedy improv bit wasn’t – as I thought at first glance – something to sit back and watch. Oh no. It was a full-on participation thing. With strangers.

Yes, and… is much better than yes, but… One of the workshop exercises involved planning something with another person. In the first round every suggestion was met with “yes, and” while in the second you said “yes, but” before adding your comment. The difference was profound, even if the bit on the end is more or less the same.

Your children can surprise you in a good way. Even though you’ve known them more than all their lives, they can still take your breath away. Boy One and Boy Two (once they got over muttering at me) pitched into the improv workshop and were both very funny and very clever.

I don’t need to be poked with a sharp stick to make a fool of myself in public. The improv workshop was run by The Maydays who managed the right balance of encouraging and inspiring, getting a dozen strangers to pretend to be a machine together within an hour or so.

We stayed at the Premier Inn in Leith where the room was comfortably adapted to make space for the three of us without either Boy having to share a bed with his mother (much to everyone’s relief).

The other bloggers doing daft things in the spirit of improv were. 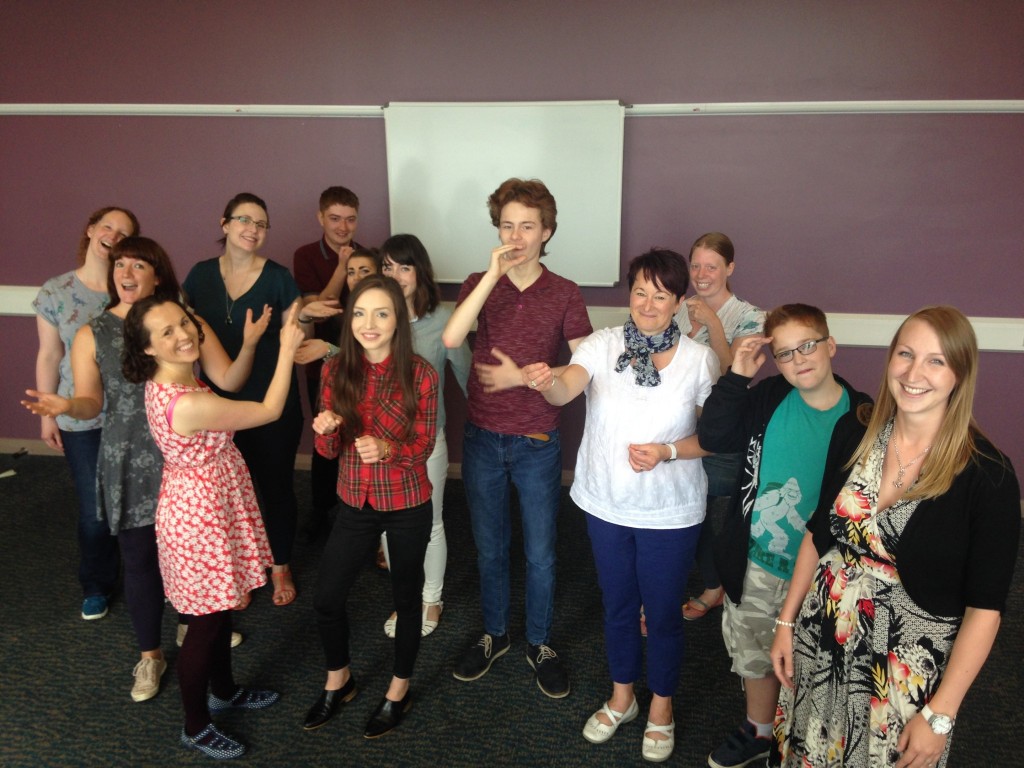 ◄ Tips for pain-free homework
Talking about autism: an agenda for mirth ►