You are here: Home / family / To be a pinball wizard… 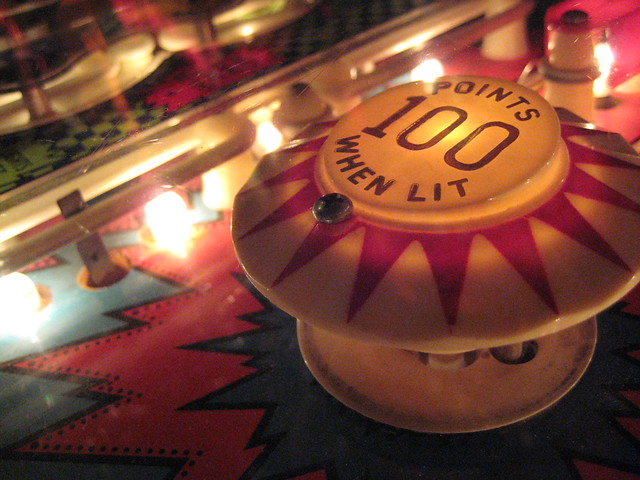 It’s been busy here. I know, I know. Less than two weeks to Christmas, of course, it’s busy and if you’re not busy you’re doing it wrong.

Anyhow, it’s not just the annual jollities that have kept me busy…

Among other things, the rain rained and not entirely on the plain but in part down the inside of the bedroom wall. Apparently no actual damage, just rain fed up of going down (or even sideways) decided to flow upwards and sneakily under the roof tiles. Whatever.

Obviously, nothing compared to those poor folk whose homes were ruined by flood water, but mighty time-consuming nonetheless.

Then there was the broken down washing machine. Not the first time, but, good grief, I’ll say it again. The system will collapse and later someone clever will discover that it was a tsunami of dirty laundry that done it. Mark my words.

The laundry that would have won our business if they were closer has the tag line “our business is in creasing”.

Then there’s the usual round of parents’ nights, school discos, seasonal somethings, festive events – usually with the same bored stall-holders sitting behind tables covered in sparkly stuff I can’t imagine a use for at each one. Glitter painted gin bottles, anyone? It is the same people, isn’t it?

The book group ladies came – A God In Ruins (Not a patch on Life After Life, but I still have a pash for Kate Atkinson anyway). Which was lovely but the squalor needed to be alleviated by the careful placing of twinkly lights. Not a speedy undertaking as there was much squalor and if you get the lighting wrong the cobwebs positively glint.

Meanwhile, the garden is on its way from abandoned rubbish dump to sleek, modern and effort free (I’m positively ignoring anyone who tells me you can’t get no-maintenance gardens). The transition, it turns out, is somewhat muddy.

All through it I’ve had a thought bouncing around. And I’m trying to catch it. It’s the pinball moment. I once had a boyfriend who had a pinball machine in his room and I played a lot. The best way to do it is to patiently wait that fraction of a second for the ball to roll towards the tip of the flippers before you push the button. Too soon and it won’t travel far until it ricochets of a nearby mushroom and vanishes out of control, too late and you miss the opportunity. Waiting and watching is key. You can’t do anything else.

Sometimes life’s a bit like that – you know you want to send your balls right to the top of the game to score high, but all the button battering in the world won’t help. In fact, worse than that. Yet, you know you can’t take your eye off the ball either. Waiting and watching.

The ball will come to the perfect spot and, if you’re paying attention, you can fire it off to a high score and it’ll seem effortless. Only it’s really not.

That’s where I’m at some days. Watching and waiting and trying not to screw it all up by battering the buttons too hard.

◄ Clearing out for Christmas
In defence of Donald Trump (sort of) ►